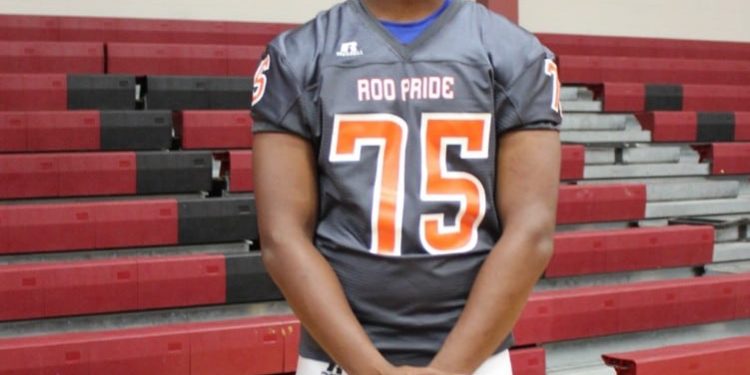 The Kentwood Kangaroos have been one of the best football programs in Class 1A over the last forty years. Their dominance has continued over the last couple of years under Jonathan Foster. In four years, Coach Foster has continued the Kangaroos’ impressive run, which includes a state championship in 2015, a state runner up finish in 2017, two district championships, and a 44-11 overall record. One player that has been with Foster the entire time is Kentwood senior OT Eric Dunn. Dunn was a four year starter on the offensive line and was one of the team leaders of the Kentwood state championship runner up team this past season. The Kangaroos are known for their speed and exceptional skill players, but those athletes could not have the success that they had without the play of some of the big men upfront. Even though Dunn may not get talked about as much as some of his other teammates, he was still recognized by the people who watched him play.

“Besides winning a state championship my sophomore year, I had a lot of awards and recognitions in my career,” Dunn said. “I was named 1st Team All-District and 1st Team All-State my senior year. I also received some honorable mention honors throughout my career as well.”

Louisiana Football Magazine’s recruiting expert Lee Brecheen was another person that took fond of Dunn’s play and thinks that he could be a player that can be a good one once he is done through college.

“Eric Dunn has a very big upside similar to Cameron Wire (East Ascension OT/LSU signee),” Brecheen said. “It’s funny to say that he is skinny at 6-6, 250, but Dunn is. However, he will grow to 300 pounds in college. He is a good athlete that can run well.”

At his 6-6, it is hard not to miss Eric Dunn. Dunn is a very good athlete for his size as he is also a good basketball player whenever he is not putting on the pads and the helmet for the Kangaroos. When he is not playing football or basketball, he finds his downtime with another hobby.

Dunn may seem like a really loose and easy guy, but once the Friday night lights are gone, a different mindset comes out especially when his team is out fighting for championships.

“I just want to stand out and do my job whether it is on the offensive or defensive line,” Dunn said. “My best two games came in two big games. I thought I played really well in the state championship game against Haynesville when I was a sophomore and against Oak Grove in the semifinals last year.”

Playing in big games and excelling against some of the state’s competition has attracted a lot of colleges including SWAC programs such as Alcorn State and Prairie View A&M, but staying in his home state was most important for the four year starter as he signed with Louisiana Tech to continue his football career.

“I chose Louisiana Tech because they just made me feel right at home,” Dunn said. “The other schools were located in big cities and were away from home. I am from a small town and I would just feel more comfortable in a smaller town like Ruston.”

The Kentwood native may play in a small town but he is also playing for one of the biggest collegiate football programs the state of Louisiana has to offer in Louisiana Tech. Dunn may not be a man of words, but is a man of action and will try to do anything possible in order to help the Bulldogs succeed on the football field.

“I really need to get bigger and stronger as I am only 250 pounds right now,” Dunn said. “However, I am going to show exactly how much I want to be there. Every game, I am going to give it my all. All I can do is just give the best that I can.”

Giving the best he can not only means on the football field but in the classroom too.

“I need to study more and go to more classes,” Dunn said. “My main goal is to get a degree.”

“I want to thank Coach Michael Jackson and my mom for helping me get this far,” Dunn said.

Eric Dunn has his goals in mind and once he arrives on campus, the All-State Kentwood offensive tackle is just going to go out there and just give it his all like he did over his high school career.