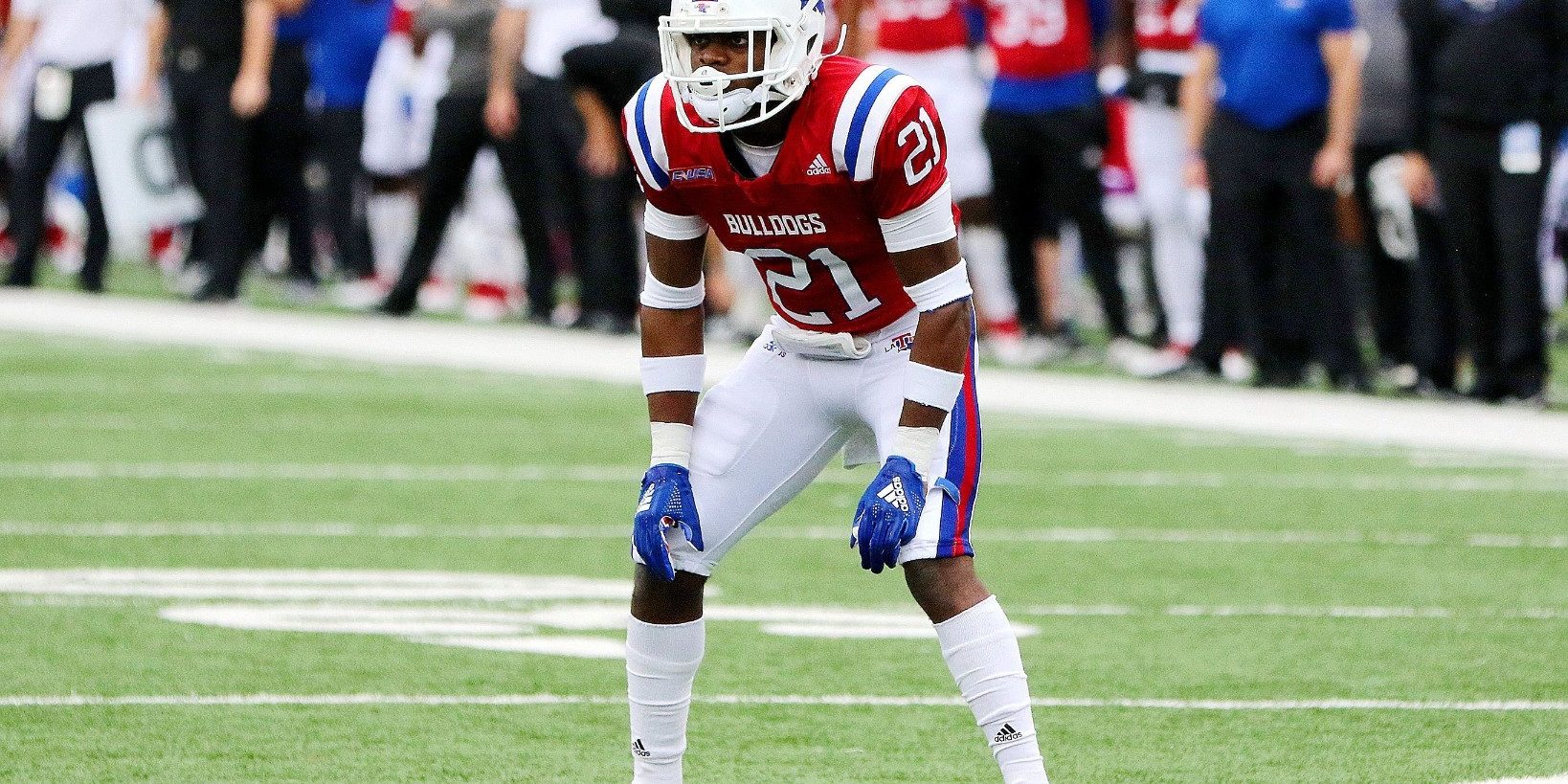 To check out our second and third round NFL Draft recap, click the link here: https://www.lafootballmagazine.com/news/c48-recruiting/louisiana-connections-to-2020-nfl-draft-second-third-round-recap/

Fourth Round: (Louisiana Natives or Louisiana College Football Players Only) 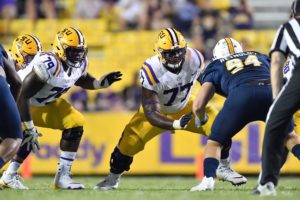 Former LSU OT Saahdiq Charles (77) is drafted by the Washington Redskins with the 108th pick in the fourth round of the 2020 NFL Draft. (Photo courtesy of LSU Athletics)

Journey To NFL: Originally from New Orleans, LA, Saahdiq Charles and his family moved to different cities before settling in Jackson, Mississippi. Coming out of Madison-Ridgeland Academy, Charles decided to sign with the LSU Tigers over the Mississippi State Bulldogs. Charles immediately made an impact for the Tigers making the All-SEC freshman team. After starting all season as a sophomore, Charles had a setback as he was suspended for the Tigers’ entire non-conference schedule due to violation of team rules. When the 6-4, 320 pound tackle did see the field, he was effective in protecting LSU Heisman Trophy winning QB Joe Burrow’s blindside. Following the Tigers’ championship season, Charles decided to forgo his senior season in order to enter the 2020 NFL Draft. As a result, the Washington Redskins decided to draft Charles with one of the earliest picks in the fourth round. 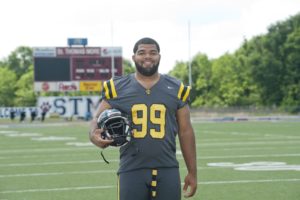 Former Neville High School and LSU Defensive Tackle Rashard Lawrence was drafted by the Arizona Cardinals with the 131st pick in the fourth round of the 2020 NFL Draft. (Property of LAFM)

Journey To NFL: As the nephew of former Neville and LSU standout Oliver Lawrence, Rashard Lawrence was destined to take that same path since day one. At Neville High School, Lawrence was one of the most dominant and highly recruited defensive lineman in the country as a five star recruit and Under Armor All-American. Lawrence, who was once on the front cover of Louisiana Football Magazine as a high school senior, signed with the LSU Tigers in 2016. Lawrence first became a starter his sophomore season when he had 32 tackles and 1.5 sacks. As a junior in 2018, Lawrence began to emerge not only on the LSU defensive front, but also as a leader on the Tigers’ team posting 54 tackles and four sacks along with being named the Defensive MVP of the 2018 Fiesta Bowl. Deciding to help bring LSU a national championship, Lawrence returned for his senior season and made sure to help the Tigers reach their goal. The LSU fan favorite was selected by the Arizona Cardinals with the 131st pick in the fourth round of the 2020 NFL Draft.

Former Plaquemine High School and UL OG Kevin Dotson was drafted by the Pittsburgh Steelers with the 135th pick in the fourth round of the 2020 NFL Draft. (Property of LAFM)

Former Minden High School and Louisiana Tech S L’Jarius Sneed was drafted by the Kansas City Chiefs with the 138th pick in the fourth round of the 2020 NFL Draft. (Property of LAFM)

Journey To NFL: L’Jarius Sneed played his high school football at Minden High School where he was a star wide receiver and defensive back for the Crimson Tide. At the conclusion of his senior season, Sneed chose to sign with Louisiana Tech over the likes of Arkansas State and UL. Once Sneed signed with the Bulldogs, he switched over to play cornerback permanently, and it turned out to be a great move. Over Sneed’s career with the Bulldogs, he accumulated over 172 tackles and eight interceptions while also playing both cornerback and safety. Sneed’s versatility intrigued the defending Super Bowl Champion Kansas City Chiefs so much that he was selected by them with the 138th pick in the fourth round of the 2020 NFL Draft. 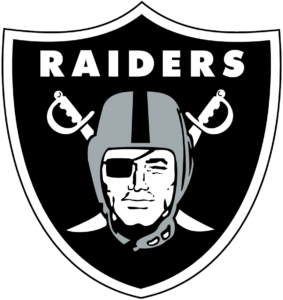 Former Thibodaux High School and Louisiana Tech CB Amik Robertson was drafted by the Las Vegas Raiders with the 139th pick in the fourth round of the 2020 NFL Draft. (Property of LAFM)

Journey To NFL: At only 5-9, 183 pounds, Amik Robertson was always told that he was too small, but Robertson made sure to prove the doubters wrong throughout his NFL journey. Coming out of Thibodaux High School in Thibodaux, LA, Robertson was an All-State playmaker for the Tigers on the football field and was also a track and field standout as well. Robertson signed with the Louisiana Tech Bulldogs where he made his name as one of the top defensive players in the country. Despite his size, Robertson made up for it with his aggressiveness and his play making ability with 184 tackles, 14 interceptions, four sacks and three touchdowns during his prolific career. As an All-Conference and All-American selection, Robertson decided to forgo his senior season and enter the 2020 NFL Draft. The newly named Las Vegas Raiders picked up Robertson with the 139th pick in the fourth round of the 2020 NFL Draft just a selection after his former teammate L’Jarius Sneed was selected.

Fifth Round: (Louisiana Natives or Louisiana College Football Players Only) 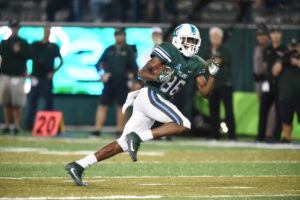 Former Tulane WR Darnell Mooney was drafted by the Chicago Bears with the 173rd pick in the fifth round of the 2020 NFL Draft. (Photo courtesy of Tulane Athletics)

Journey To NFL: Coming from Gagsden City High School in Gagsden City, Alabama, Darnell Mooney turned out to be a great addition for the Tulane Green Wave under head coach Willie Fritz. Mooney was one of the team’s most impactful players over the last two seasons leading the Green Wave not only leading the offense in receiving both seasons, but also leading the team to two straight bowl game appearances for the first time in Tulane’s football program history. Mooney’s impressive 4.38/40 time at the 2020 NFL Combine impressed the Chicago Bears enough to select the Tulane speedster with the 173rd pick in the fifth round of the 2020 NFL Draft.

***Come check out our website tomorrow as we continue to recap all of the Louisiana high school and college players that were selected in the 2020 NFL Draft!