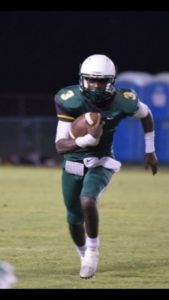 Under big name high school head coaches such as Guy Mistretta and David Brewerton, the Livonia High School Wildcats had a lot of success during that span including winning a Class 3A state championship in 2014 and finishing as the state runner up in the same classification a year before. Now, former Brusly High School Head Coach Marc Brown will now try to duplicate the success of his predecessors in his second year as the Wildcats’ head coach. What has helped Coach Brown in the transition is having a dual threat signal caller with experience. That quarterback is senior Kerri Wells. At 6-0, 170 pounds, Wells may not be the biggest guy on the field, but his athleticism and leadership stands out according to Louisiana Football Magazine’s recruiting guru Lee Brecheen.

“Kerri Wells is a really good athlete,” Brecheen said. “He has good hands and good speed as an athlete. He makes really big plays and has a chance to be really special in the end.”

Wells has a lot of confidence in his athleticism to both throw and run the football, but is still working on the mental side of the game.

“Being a threat running and throwing the football is my biggest strength, but I need to read defenses better,” Wells said.

Wells has come a long way as three years ago, he was used mostly as a starting wide receiver. Now, over the last two years being a 1st Team All-District quarterback and throwing for over 1,000 yards, it seems that Wells has made the right steps necessary in order to put not only the team, but also himself in a good spot. It has paid off as Wells has received some interests from colleges heading into his senior season.

“I am being looked at by ULL, ULM, Nicholls, and many others,” Wells said. “Right now, my only offer is from Jackson State.”

With a big year and lofty expectations, there is a chance for Wells to make plenty of more noise by the end of the football season.

“My goals are to be district and state champions,” Wells said.

“We are on a mission to pay back everyone from last year,” Wells said. “We have a different mindset and we are ready to get loose.”

Not only Wells has come a long way as far as his development from playing wide receiver to quarterback, but with his attitude and leadership as a whole considering there was a time that he did not enjoy the game of football.

“When I was younger, football was the last thing on my mind,” he said. “I used to hate it with a passion, but now as I got older, I love the game more than ever before. I accomplished being a leader to everyone and having a lot of people look up to me and know I have their back no matter what. I carry all the weight.”

That weight is going to be a little lighter now as the team is a year more experienced and has plenty of talent including four star junior wide receiver Jacobi Bellazin, who is 5-8, 181 pounds with blazing 4.3/40 speed. Not only is this quarterback wide receiver duo very talented, but they both have the chemistry to be special in 2018 as they both grew up together as best friends.

“From growing up together playing rec ball, we treat each other like blood brothers on and off the field,” Wells said. “We practice with each other in the off season so when we see things, it works out pretty good.”

It seems like that the combination will work out plenty of times over the fall, but the question remains about the other players on the team. Well, with other senior leaders such as RB Charles Harris and DT Jermaine Leonard as well as a talented supporting class, the Wildcats are definitely a sleeper team to watch out for in this upcoming season at the 4A level.

“We are hungry,” Wells said. “The way we change some things from last season to this year, we are an unit now and we are going to get the job done no matter how hard it gets.”

It has been hard for Wells especially last season, but his mental toughness, attitude, and competitiveness also help him stand out besides his impressive measurable and 4.5/40 speed. Being the guy that performs and wants to stands out on his own is something very unique.

“I don’t really look up to anybody because I am my own person and that I do my own thing,” Wells said.

Wells and the rest of the Livonia Wildcats finished their scrimmage against Tara High School tonight, but the next time that you can see them play will be to open the season against Avoyelles High School on Friday, August 31st.