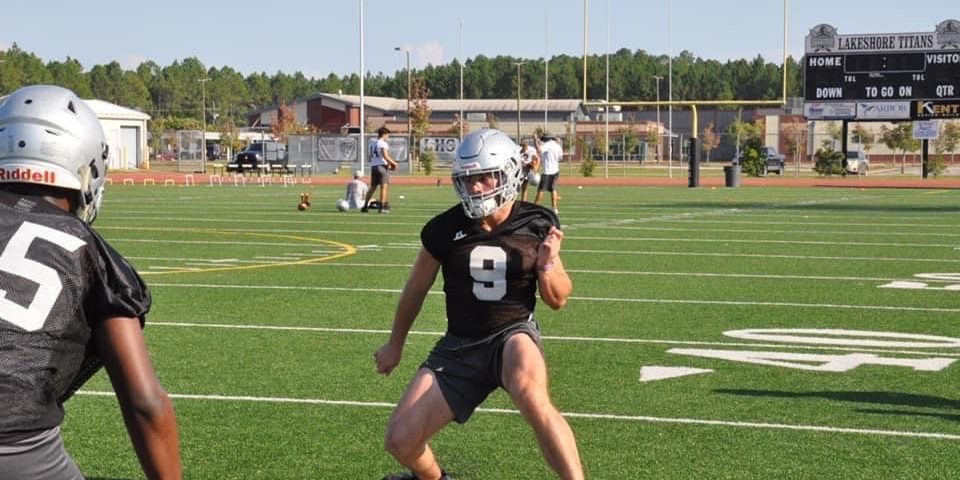 The Lakeshore Titans have been one of the most dominant Class 4A programs over the last couple of seasons. In fact, led by head coach Craig Jones, the Titans have conquered opponents winning 39 of its last 42 games and advancing to the Class 4A state championship back in 2017. A player that has played a key part on those teams is senior linebacker Devin Weilbaecher. With back to back 100 plus tackling seasons, Weilbaecher is one of the best defenders in South Louisiana. The 6-0, 205 pounds linebacker was named All-District, All-Parish, and was an All-State honorable mention as a junior. However, for the standout Lakeshore linebacker, starting for the Titans varsity team was never a given.

“My biggest strengths are my experience,” Weilbaecher said. “I got a little action on special teams my freshman year and I’ve started at linebacker since my sophomore year. I believe my speed and being able to cover sideline to sideline are my biggest strengths.”

Weilbaecher’s abilities on the football field compares to his interests off the field.

“My goal once I get to college is to earn a degree in Criminal Justice,” Weilbaecher said. “After my playing days are over, I would like to pursue a career in the FBI.”

Whether it is cracking down cases or studying how to shut down opposing offenses, it is clear that research, experience, and work ethic have helped this future FBI agent bring down ballcarriers like one would bring down criminals. Like a particular NFL linebacker, Weilbaecher heavily invests his time in the film room.

“I model my game after Luke Kuechly (Boston College/Carolina Panthers) because of his ability to do it all,” Kuechly said. “He can cover sideline to sideline, is a great pass rusher, and does well in coverage.”

For Weilbaecher, the love of football first started for him just as soon as he was beginning Pre-K education.

“My love for football started when I was 5 years old and I first realized I had a future in football my sophomore year,” Weilbaecher said.

It was no coincidence that Weilbaecher emerged individually on the football field at the same time the program was dominating opponents.

“I think the key to our success has been the way our coaches prepare us starting in the summer and the amount of experience most of the starters have had,” Weilbaecher said.

The Titans had an incredible season in 2019 winning 13 games and making it all the way to the Class 4A Semifinals. However, the Titans were just one game short of accomplishing their goal of reaching the Superdome. Now, in 2020, Weilbaecher will make sure that reaching one game short of a title does not happen again.

“My goals for the upcoming season are no less than to win the 4A state championship,” Weilbaecher said.

In order to accomplish that goal, the veteran linebacker is making sure that he keeps his end of the bargain.

“I’ve been working on improving my overall conditioning since I will be playing both sides of the ball this year,” Weilbaecher said.

The Lakeshore All-District selection will be playing double duty just like the Titans’ best player did last season in Christian Westcott (Southeastern). Westcott, who played for the Titans at quarterback and linebacker, was the Louisiana Gatorade Player of the Year by having a mind blowing statistical season in 2019 with 2,779 passing yards, 35 passing touchdowns, 1,368 rushing yards, and 38 more scores. While Westcott may have graduated and will not be eligible for another season with the Titans, his number nine jersey will be in safe hands with his successor, which is none other than Devin Weilbaecher.

“Jersey number 9 represents leadership, toughness, competitiveness, and the desire to win every time you step on the field,” Weilbaecher said. “It’s important to me because I take great pride in being the leader and I love to win.”

No matter what the sport is and what the cost may be, the Lakeshore senior athlete will try his very best to win.

“I grew up playing football, baseball, and basketball,” Weilbaecher said. “In 8th grade, I played all six sports the school offered. I’ve also started on the varsity baseball team since my freshman year.”

He also takes pride in playing against the very best of the best.

“I’m mostly looking forward to the De La Salle game,” Weilbaecher said. “I love competing and their running back Montrell Johnson is a very talented D1 running back. I think it’s a great opportunity to compete and prove myself.”

All Weilbaecher has done over his great prep career so far is prove himself. However, he still has more proving to do as he has not received an official offer as of now.

“I have no official offers, but Lamar, McNeese, and Tufts University have shown interests in me so far,” Weilbaecher said. “I haven’t been able to attend any camps or show my talent to any schools since the pandemic.”

The good news is for this three year Lakeshore starter as well as the rest of his teammates as he will have one more year to show his worth on the field thanks to the LHSAA’s ruling that there will be high school football in the state of Louisiana.

“It’s time to show everyone what we’ve been working for since June,” Weilbaecher said. “My message for the Titan fans is be ready to stick around until late December!”

With a leader like Devin Weilbaecher, not only the prestigious number nine jersey will carry on proudly, but the Titans may be victorious at the top of the mountain by season’s end. For a competitor like Weilbaecher, he would not want it in any other way.

Click the link below to check out Devin Weilbaecher’s junior highlights: