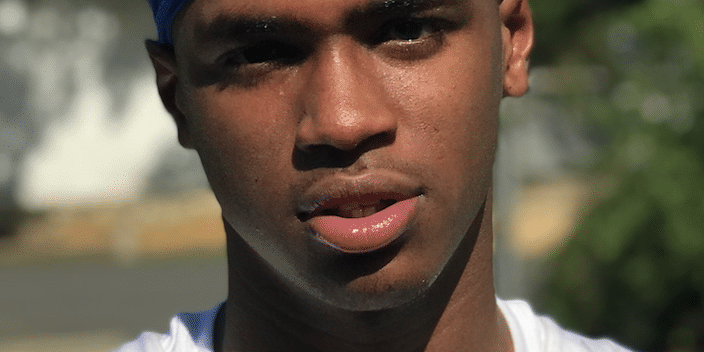 Everyone in Kentwood knows about their most recent big time signee in Trey Palmer, who as a four star wide receiver recruit, helped lead the Kangaroos to the Class 1A state championship in 2018 and ended up signing with the National Championship LSU Tigers. However, not a lot of people know that Palmer has a younger brother on the other side of the football that also had DI football talent in LB Ja’Kevis Callahan. Even though the spotlight is always on Palmer, getting a chance to compete with a brother that has SEC talent has a lot of advantages.

“Well everything’s a competition with that guy, but I would say it’s fun,” Callahan said. “We have a very great bond. He helps me with my technique, and he’s always on me when I get sloppy. Also, I get some insight on what it’s like to play at the college level.”

Not only does Callahan get insight on how to get to the college level, but he also gets advice on how to handle the ever evolving recruiting process.

“He would always tell me to just be myself and you will know what schools are for you,” Callahan said. “He says it is a lot of work, but it’s all worth it.”

Callahan is starting to realize that the recruiting process may come easy for some, but for others, it can be difficult, especially during the COVID-19 pandemic.

“Some schools have shown interest, but I have no offers,” Callahan said. “I have to do a better job at putting myself out there. COVID has made it hard because we miss camps, but I won’t stop working.”

Currently, Callahan is working hard not only to impress colleges, but he is also working hard to recapture the magic he did with his brother when the Kangaroos won the state championship his sophomore year.

“It has been one of the greatest accomplishments in my young life,” Callahan said. “The love we got from the fans were unimaginable. I remember when we made it home from the dome, our fans were cheering us on as we got off the exit. Something about it was so surreal. It’s what they expect and what we want to deliver year in and year out.”

Last season was a little bit of a disappointment especially coming off a high such as winning a state championship game, but the veteran Kentwood defender knows what it takes to get right back to the Dome this upcoming season.

“This year is going to be pretty different, but I think working hard and having great leadership will ultimately get us to another championship,” Callahan said. “We have the talent. Now, we just have to take that next step and help our young guys grow.”

Not only being one of the best players on the team, but also being a guy that the younger guys look up to is reminiscent of his older brother, who wore number seven during his playing career with the Kangaroos. Now, Callahan is enjoying wearing the number that helped his brother get so much success.

“As for the number I think it’s great to keep it in the family, but I don’t feel any pressure,” Callahan said. “I just want keep working.”

Callahan showed last season there was no pressure in wearing the coveted jersey as he went on to a very productive junior season by posting 87 total tackles, 47 solo tackles, two sacks, and one interception.The 6-1,185 pound linebacker is a versatile defender for the Kentwood Kangaroos as he can play at all three levels of the defense including the defensive line, linebacker, and in the secondary.

“I think my biggest strengths are my knowledge of the game and just my instincts,” Callahan said.

Like Palmer, Callahan plays multiple sports to help his athleticism and instincts on the football field.

“I think basketball helps me with my footwork because when you are on defense, you have to stay lower than your opponent and your feet have to be quick,” Callahan said. “As for track, It helps me with my stability and controlling my breathing as playing both ways is not an easy task.”

When asked about what college that Callahan wants to play for, it is no surprise what the answer is, but at the same time, he realizes that he has to accept anything that comes his way.

“I’ve always wanted to play for LSU,” Callahan said. “It’s what I grew up watching, but now, I am willing to play anywhere. All i want to do is create a good culture and be a great player wherever I go.”

A frequent phrase used by Callahan is to “keep working”, and that is what he wants to tell all the college recruiters out there that he won’t mind dealing with hard tasks.

“I am a hard worker and I never give up,” Callahan said. “What separates me from other players is my knowledge of life and football. I’m always willing to learn from coaches, and I am also an all A student in the classroom.”

For Callahan, no matter where his football career brings him, he wants to be remembered for his actions off the field.

“After football, I want to make a major impact on this world,” Callahan said. “As for a career, i’m on sure what that will be, but I know I will impact a love of things and people.”

Although playing at two different positions and having different recruiting experiences, Ja’Kevis Callahan and Trey Palmer share not only the family tree and a number seven jersey, but also a willingness to perfect their craft.

Click the link below to check out Ja’Kevis Callahan’s junior highlights: