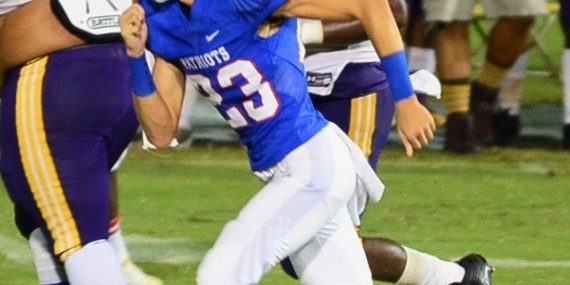 When people talk about special teams, they talk about the kickers and punters. They are both really important, but a position that is not talked about as often, but is just as important are the long snappers. Without the long snappers, kickers and punters will not get the opportunity to do their jobs. It may not be the flashiest position, but it gets the job done and is just as valuable as any other position on the field. One player that gets the job done on a consistent basis at the high school level is John Curtis Christian School’s own Zachary Englander. John Curtis has been so successful over the past 45 years because of their consistency and knowing that it takes everybody doing their jobs to win football games. Englander has been as consistent as any other long snapper in the state and is just as reliable as anybody around. He is going into his third year as a starter at the position, but he says that he has been long snapping much longer than that.

“My 12 year old park ball season was ending for the JRPD Bulldogs, which is the All-Star team that goes to play in Tennessee,” Englander said. “One day, the coaches asked “Who can long snap” and jokingly, I said, “I snapped for my old flag football team”. They said alright “let’s see it”. After that, I’ve long snapped ever since.”

Consistency has already mentioned quite a few times already, but Englander knows that is one of the biggest qualities for a long snapper to have.

“Consistency and accuracy is very important for long snappers,” Englander said. “Speed comes over time with reps and getting stronger, but in order to be a really good long snapper, you must be consistent and accurate.”

Englander has worked on all of those qualities at various camps learning under the best position coaches across the country over this past summer.

In speaking of learning from some of the best, there is nobody that is a bigger name in Louisiana high school football than J.T. Curtis. Playing under Curtis is one of the biggest takeaways that Englander will ever have during his lifetime.

“It’s an once in a life time opportunity to be coached by the best,” he said. “His knowledge of the game and life is amazing. He is an great mentor. Sometimes when you just sit back and listen to what he has to say whether it’s about the game of football, life, or school, you leave the conversation a better person.”

“We don’t talk about all that type of stuff,” Englander said. “We focus on what we have in front of us and work. We don’t listen to what others have to say. We go out and play football no matter what.”

Not only does he epitomize the message of John Curtis on the field, but he shares that same message off the field as well.

“I used to lead church groups and preach at a young age. I use football to help get the word of God around,” Englander said. “I would like to either work in physical education and become a coach. I want to stay within the world of sports.”

Just like how Englander approaches his snaps, it is the same way with the Patriots as they treat every game with a business approach and at the end of the day, the team wins and loses as an unit.

“We treat everyone the same. No one opponent is bigger or smaller than the next. We take it day by day every week,” he said. “We preach unity with one another. We need to act as a unit every day no matter if it’s school, everyday life, or football.”

Englander is not an one trick pony as not only does he do a great job of consistently snapping the ball, but also does a good job of being the first one down there to tackle the elusive punt returners and playing different positions like defensive end as well as wide receiver show how athletic Englander really is.

“My first year starting was my sophomore season,” Englander said. “I started at long snapper and was the 3rd string defensive end. Getting the starting role for long snapping was huge for me. It let me see early playing time and got me in the flow of high school football. For snappers, stats are not kept except for tackles. My sophomore season, I got three tackles on the punt team. Last season, I had 14 tackles. I also play wide receiver for my team as well.”

Playing three different positions, Englander has really appreciated what it takes to play those positions and the players that excel at them.

Zachary Englander is continuing to strive today and you could tell that he is very appreciative for everything that has happened in his life.

“Above all I wouldn’t be where I am in life without God,” Englander said. “My parents have pushed me my entire life to be the best I could be in any stage or aspect in life as well as my coaches. Being coached by some of the best in the nation is a true honor.”

Even though long snapper is a tough position to evaluate, some colleges have been impresses with his ability.

Louisiana Football Magazine’s recruiting guru Lee Brecheen is very impressed with Englander as a long snapper. Even though Englander may not be as big compared to other long snappers at only 175 pounds, Brecheen believes that the sky is the limit as for as what he could do at the next level.

“I saw him last season in a full game,” Brecheen said. “I thought he was as good as any I saw last season. He has been doing it a long time and has been pretty consistent. He does it all for his team whether it be field goals, extra points, or punts. Long snappers do not need to be a certain height, but in time, he will need to bulk up to 200 pounds to withstand some of the physical contact when it comes to playing DI football. However, he is the best long snapper that I have seen come from John Curtis.”

Brecheen has been involved with recruiting for a long time and even though long snappers do not really get recruited that hard and do not sign many scholarships early on, do not think that they do not matter because they really do.

“Long snappers are often recruited last towards the end of the recruiting season,” Brecheen said. “In fact, I have often received calls two months after recruiting is over of coaches wanting long snappers on their team. All I want to tell Zachary and the other great long snappers in the state is not to give up because colleges need long snappers too just as much as any other position.”

Here at Louisiana Football Magazine, we usually cover some of the highly prestigious players and positions. We talk about the quarterbacks, running backs, receivers, etc., but we also understand that long snappers play just as an integral part on these teams. For Zachary Englander, his role on the team is just as important as any other. The best teams have everybody doing their jobs and that includes the entire team.