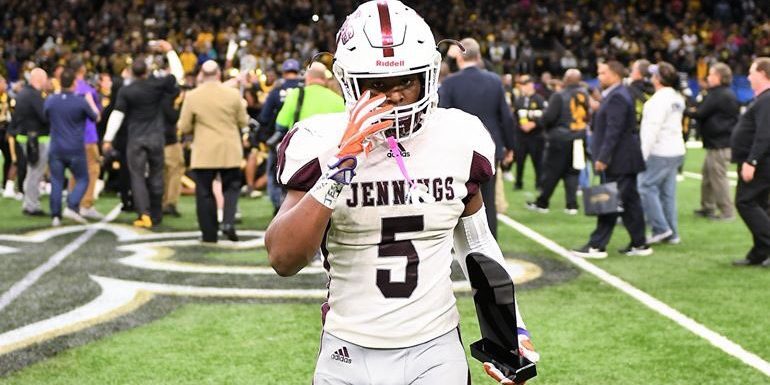 It seemed like it was yesterday when Travis Etienne was running right through defenses at Jennings High School. Now, after an All-American career at Clemson, the two time ACC Offensive Player Of The Year is setting his eyes on the NFL as one of the top prospects in the upcoming NFL Draft. One person that has had a front row seat in seeing Travis Etienne’s impressive journey is none other than his younger brother Trevor Etienne.

“It just shows me that the hard work does not go unnoticed, and if you put the work in, great things will come,” Trevor Etienne said. “Travis has a chance to become the first running back taken in the draft so in order to get there, you have to put the work in, and he has done that.”

Putting the work in is something that the younger Etienne is doing in order to have the similar type of career as his older brother. In fact, Trevor Etienne was heading to the gym as I was conducting this interview with him. For the younger Etienne, the hard work has really paid off after rushing for over 4,000 yards the previous two seasons. In fact, Trevor has done already accomplished something that his older brother has not accomplished during his time at Jennings High School, and that is play in a state championship game back in Trevor’s sophomore campaign. However, Trevor knows that there is still left to accomplish before his high school career is all said and done.

“I find that team had and what this year’s team has is the want to,” Trevor Etienne said. “We have the talent, but I am trying to instill the want to attitude in our younger guys. If we work hard and put forth the effort, we will get there.”

It is not only Trevor’s effort, but it is also his play on the football field that speaks for itself.

“I feel like I am a very explosive player plus I can catch the football out of the backfield,” Trevor Etienne said.

Knowing that Trevor Etienne is a star in the making and that his older brother Travis is already a star as well as a big name, it is only natural to compare and contrast the two player’s playing styles. The way Trevor sees it, there are both similarities and differences to he and his older brother’s running styles.

“We are both very explosive, and our vision is great,” Trevor Etienne said. “I feel like he is faster than me, but I can catch the ball better out of the backfield. That’s just the two differences between us, but as far as what we have in common, we are both explosive and reliable backs.”

Also like his older brother, the 5-10, 205 pound four star running back has received plenty of college attention. Currently, the rising Jennings senior running back has received offers from the likes of Alabama, Arkansas, Auburn, Clemson, Florida, Florida State, Georgia, Howard, UL, Louisiana Tech, ULM, LSU, Marshall, McNeese State, Mississippi State, Ole Miss, Southern Miss, Penn State, Southern Miss, Southern, Tennessee, Texas A&M, Virginia, and Florida Atlantic. Even during a normal recruiting process, it would be tough to decide between all those great programs, but it is even harder having to do so without taking visits to the campuses themselves.

“That’s why I feel it is hard to make a decision because I can’t go anywhere because of COVID,” Trevor Etienne said. “I am not sure where I want to go if I don’t know what it is like to be there. I want to be somewhere that feels like home. Of course, I want to play, but that is going to come by hard work. No matter where I go, I know I am going to have to compete. I am going to have to go somewhere that is a home away from home.”

Still, that decision will come in time, but for right now, Trevor knows that he has some unfinished business to take care of.

“Everyone wants to win a championship, and that’s the main goal for me,” Trevor Etienne said. “I’ve been there and have gotten a taste of it. Now, I want to go over there and win. As far as a personal goal for me, I want to become more of a physical back. I want to not go around defenders, but go through them type of back.”

As Trevor continues to focus on his senior season, he knows he can always count on his older brother to help him anyway he can.

“My brother has always told me to just be myself,” Trevor Etienne said. “Don’t try to leave a legacy, but live a legacy. My brother is one of a kind, and you don’t find many guys like him out there. If I try to live up to him and his standards, it would just take the fun out of the game for me.”

Right now, both Travis and Trevor Etienne are both running their own legacy, but at the same time, are making sure that their legacy lives on in the small town of Jennings.

“I want to see the younger guys from my community make it too,” Trevor Etienne said. “If I am successful, I want to put a recreation center around Jennings and help reach their platform so they can get the exposure that they need. I know a lot of guys are not blessed with the exposure that me and my brother have. Watching us play, they can see what it takes to get there, and we will make sure to help them get there.”

No matter how both Travis and Trevor Etienne’s playing careers go, both are great young men that are running the football more than themselves, but for the next generation of local players that are striving to make their own legacy as well.

Click the link below to check out Trevor Etienne’s junior highlights: