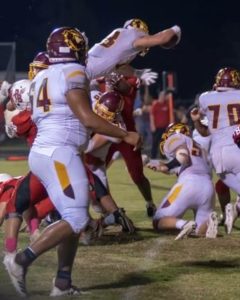 Doucet improved on his strength, speed, and agility from the past season, which resulted into an even more powerful player than ever before. This season, Doucet has ran for 1,405 yards and 15 touchdowns on only 138 carries. For Doucet, he has a chance to run for 6,000 yards and 70 touchdowns in his incredible career.

When Doucet was asked what he does during his free time, he responded,

His biggest goals for this season are to bring another state championship back home to Iota, and set an example for the underclassman as well as become a better leader on and off the football field, especially for his brother who will begin his freshman year on the football team.

Iota’s offensive star has received offers from Louisiana College and Arkansas Monticello, but he is also being contacted by schools such as McNeese State, Southeastern, ULL, Mississippi College, Arkansas State, and Nicholls State.

Click the link below to check out Luke Doucet’s senior highlights!