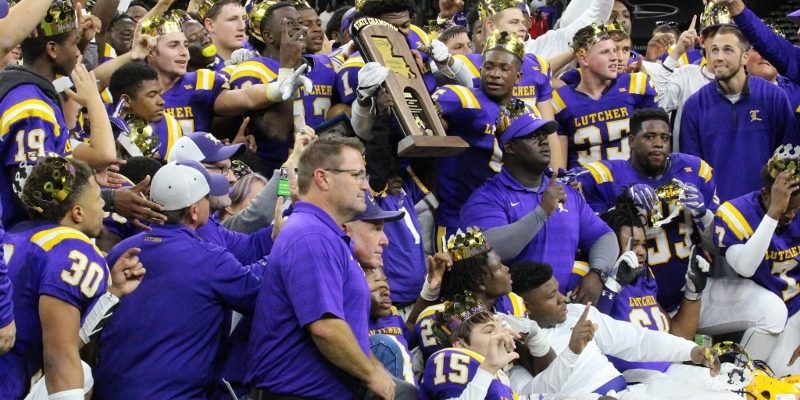 The Lutcher High School football program is one of the best in the entire state regardless of class. The program has won eight state championships and multiple district championships in their history. They also have numerous of players that have played or are playing in the NFL including current Miami Dolphins WR Jarvis Landry. After the 2015 season, the Lutcher Bulldogs won the state championship and carried legendary Lutcher head coach Tim Detillier off the football field in style as it was the final game as their head coach. After so many winning years, the Bulldogs had to find a replacement and they found it in the team that they defeated in the state championship which was parish rival St. James. After losing in the state championship game, St. James Head Coach Dwain Jenkins took the job across the river parish to take the Lutcher football job. Even though Dwain Jenkins was the head coach for Lutcher’s biggest rival, he is very familiar with the Lutcher Bulldogs as he was a former Lutcher student and athlete. He also was an assistant coach under Tim Detillier. In 2016, a lot was expected from the Lutcher Bulldogs as even though they lost star defensive players like Sully Laiche and others, they return a lot of playmakers back including Jontre Kirklin, Al’Dontre Davis, and Tariq Belvin. Everybody was wondering if Dwain Jenkins can carry the winning tradition at Lutcher High School and boy did he. The Bulldogs won their district championship going 8-2 in the regular season and beating great teams in the playoffs such as Avoyelles, Wossman, Marksville, and West Feliciana to make it to the Superdome. Throughout their history, the Lutcher program has not won back to back state championships and on December 10th. The team had to play one of the most talented teams in the state in Amite High School. It was a really good competitive game with back and forth scoring but the Lutcher defense held on to clinch their 8th state championship 40-36. It was the first for Dwain Jenkins in his first year as Lutcher Head Coach and it was also the first time that the program won championships back to back. Now, the regular season is over and a lot of playmakers leave the program but there is a lot of anxiety and excitement around the school community. We caught up with Coach Dwain Jenkins as he talks about his first season as Lutcher Head Coach, the program, Coach Detillier’s influence on him, the future of the program, and so much more in today’s edition of Inside the Program!

The Lutcher Bulldogs charge into the Superdome before their big game against Amite. (Photo courtesy of Lutcher High School)

LAFM: How long have you been involved with coaching?

LAFM: You have been involved on both sides of the Lutcher-St. James High School and have experienced being on both ends of the rivalry. Give me a perspective on how big the River Parish rivalry is between two great high school programs.

There are a ton of great rivalries in the River Parishes.  Lutcher-St. James is unique in many ways because the two programs have a lot of tradition and history.  The fact that it is common for kids to take classes together makes it very unique.  Both communities believe in their kids and the programs and always believe regardless of the records or circumstances that their team is better.

LAFM: You played under Tim Detillier as well as coached under him when you were an offensive coordinator. How different is it coaching under him and playing under him and what were some things that you picked up from Coach Detillier that has helped you become a coach today.

The ability Coach Tim has to motivate student-athletes is outstanding.  The biggest thing that people, who worked and played for him, take from him is the passion and love that he has for Lutcher High School.  Probably the best advice he gives is to pray and feel good about your decisions. No one else walks in your shoes.

Lutcher is a true community school.  We are the heart of our community and that makes it special.  No one moves into Lutcher. We have the same families that keep populating our roster so it is common to have “family” numbers that dads, brothers, uncles, grandfathers and cousins have worn in the past.  It makes it special to know that you are playing in a program rich in tradition. Wearing the Purple and Gold means so much to so many people.  It is also very humbling to be a part of the legacy of coaches that have had so much success at Lutcher High.  I joined a very special group that have captured State Titles as the head coach at Lutcher. Lou St. Amant won the 1st one in 1975, Frank Monica -1978, David Richard – 1983, Tim Detillier – 2003, 06, 08, 15 – Myself. Coach Detillier, Coach Richard, and myself are all Alums.

LAFM: Who are some of the memorable players to go through the Lutcher program?

LAFM: This season, you came back to Lutcher after bringing the St. James program back but this time to be the head coach. How much pressure was it on you to replace a coaching legend like Tim Detillier.

The pressure that was the 2016 season was one of expectations – I had been on staff three previous attempts to win back to back, twice falling in the Semifinals.  With me coming in as a new coach the toughest job was making the changes that need to be made to match my style and personality most coaches take over losing programs so it is easy to make changes.  Taking over a team coming off a state championship makes that task a little tricky.

LAFM: What are your favorite memories at Lutcher High School when you were a player?

During my senior year we struggled but we managed to pull off an upset of highly ranked West Feliciana team.  What stands out the most looking back is the number of great players we played that year including Ed Reed, Thomas Pittman, LaBrandon Toefield, and Antron Seiber

LAFM: Now, let’s talk about this year. When did you realize that this team could get to the Superdome?

It is special because we had members from the previous six teams that attempted to go back-to-back join us for our final Thursday practice of the year. It was special that this group, that did not always play its best, but always believed found a way to finish this mission.

LAFM: The team had a motivational leader in a particular sophomore Seth Leblanc. What is special about Seth as a leader and was him bouncing back from cancer give you a different perspective on how to approach each day and each practice?

Seth is a great story that hopefully can inspire other kids that have been diagnosed with Childhood Cancer.  Fight and believe is something everyone can learn from.

LAFM: This year, the team has played a lot of great teams like West Feliciana, De La Salle, St. James, St. Amant, Amite, etc. What are your thoughts on the schedule the team had to play this year?

When you add the Jamboree versus Destrehan, our scheduled tested us and prepared us for the playoffs.  The one thing we were able to do is understand that we had one goal that could be measured outside the building and that was winning on Dec. 10th.  So every game in the regular season was an opportunity to learn and acquire what it would take to accomplish that goal.

LAFM: Which opponent were you impressed the most and why?

Many teams on our schedule had tremendous seasons.  Playoff Football is special because it brings out the best in teams and coaches. I respected the heart and passion that Coach JT Dunbar’s Marksville Tigers played with. West Feliciana was a well oiled machine that Coach Odom has built and he had built that program into one of the best in the state. Anyone that goes to Parkview and leaves with a win has had a great season. Amite was so talented up and down the roster in the State Championship Game and it ended up being an instant classic.

LAFM: The team had a lot of seniors on the team. Was the senior leadership the key on the state championship run as a lot of players played on the year before?

Leadership is always a key.  The Four returning seniors on defense displayed the grit and will to win that defined this Football Team – Ethan Bland, Rashaun Preston, Thaddeus Watis & Dylan Recotta gave everything they could day in and day out to ensure success.

LAFM: Jontre Kirklin is obviously one of the best players to come through the program as he won two state championships and was the Class 3A offensive MVP. How special is Jontre not only as a football player but as a student?

Jontre is a special athlete.  The sky is the limit for Jontre, would not be shocked to see him join Dexter McCoil and Jarvis Landry in the NFL one day.  If he commits to honing his craft on the next level, he will have tremendous success.  The biggest compliment that I can give Jontre is when the lights were the brightest and the stage the biggest, he turned in his best performances.

LAFM: You also had some other great players that are seniors this year. Who were some of the best senior players that won’t be in your program next year?

We are going to miss the four leaders on defense.  We will also miss two of the big time playmakers at Receiver Al’Dontre Davis and Tariq Belvin.

LAFM: Who are some of the assistant coaches this year that helped you on your first year as Lutcher Head Coach?

We have a great staff –

LAFM: Let’s talk about next year. Who are some of the returning players that you are excited to bring back?

LAFM: There are rumors of Lutcher moving up to 4A. What do you know as of right now about classifications?

We will be 4A and play in a super competitive Baton Rouge based district.

LAFM: Who are some other people that you want to give a shout out to?

My family, especially my wife and kids, always are supportive.

LAFM: What do you want to tell all the Lutcher fans and players about the future for Lutcher High School football?

We know the challenges of the next couple of years being in 4A, but we need to stick together and put in the work continuing with the daily improvement as we strive for the school’s 1st 4A state championship.