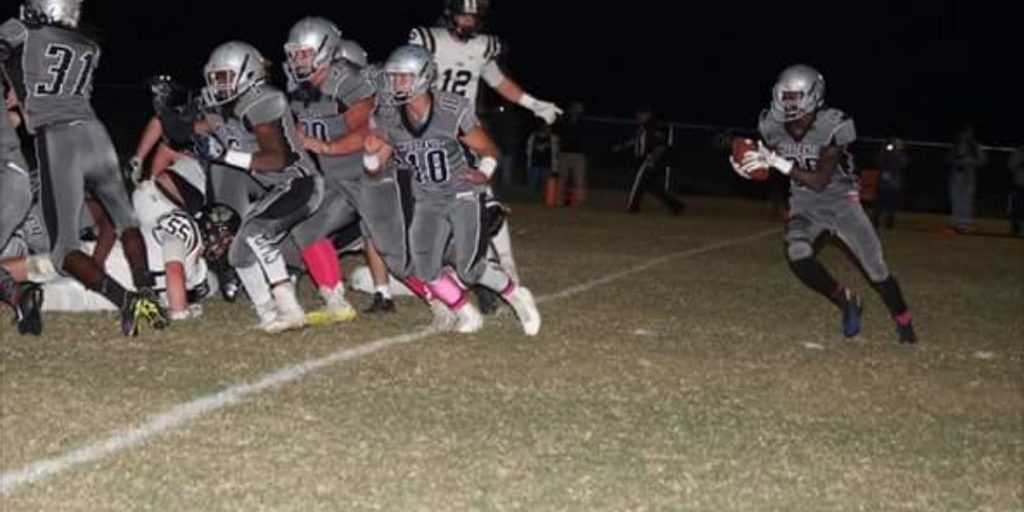 For today’s edition of Inside the Program, we focus our attention on Avoyelles High School which is a 3A school located in Moreauville, LA. Unlike the last two programs that we covered, the Mustangs did not clinch a district championship or a state championship like Lutcher High School or St. Helena College and Career Academy, but this is a really fun team to watch especially for fans that love offenses. What sets Avoyelle Head Football Coach Andy Boone apart from other coaches is that he is a gambler and he calls games different than a lot of other coaches. In an age that football is run by spread offenses, the Mustangs run the wing offense. Not only does Boone run a different offense than most programs now, he also calls games differently as well. Let’s just say that he does not like to punt. It could be 4th and 30 on their side of the field and the Mustangs will still go for it on 4th down. They also go for two after every touchdown as well. Before Andy Boone arrived at the program, the team was having trouble winning games. Ever since he took over, the Mustangs has had some success such as five playoff appearances in eight years and two district runner-ups. He has also made the program really exciting as well with no punts, going for two after every touchdown, onside kicking after every touchdown, and trying to score on every possession. His goal is for his team to be on defense as little as possible. He has made football exciting for the Avoyelle community. The next step for the Mustangs is to clinch the program’s first district championship and maybe someday a state championship. This season, it was an up and down season overall for the Mustangs. There were a couple of games where the team exploded offensively and scored a lot of points like the game against University Academy where the team scored a ridiculous 84 points, and there were other games that the team did not show up. As a result, the team went 4-7 and appeared in the playoffs where they lost to the eventual state champion Lutcher Bulldogs. Now,  Coach Boone and the Mustangs are looking to build on last season and have more consistency. If the Mustangs can score at a more consistent level like they are capable of, then watch out for this team in 2017. We caught up with Head Coach Andy Boone as he talks about this season, next season, goals for next season, his unusual offensive strategy, and so much more in today’s edition of Inside the Program!

The Mustangs’ goal is to be on offense as long as they can. In the playoff game against Lutcher, the team had the ball for 41 of 48 minutes. (Photo provided by Andy Boone)

LAFM: How long have you been coaching in Louisiana?

LAFM: What got you involved with football?

I grew up loving baseball, but the first time I hit someone in football practice, I was hooked. You get a sort of high from playing. The next best thing to playing is coaching.

LAFM: Who are your role models in regards to coaches?

I don’t have any role models in coaching, but my favorite coach growing up was Tom Landry (Hall of Fame Head Coach for the Dallas Cowboys). He was always so calm and cool on the sideline. He was a Christian, and that hat was awesome.

LAFM: How long have you been coaching at Avoyelles High School?

I have been the head coach at Avoyelles for eight seasons.

LAFM: Who are some of the best players that have come through the Avoyelles High School program?

The best players that I have coached all played for Avoyelles. Darius Duskin, Matthew Mcghee, Wesey Boone, Dravon Bastiste, Chris Towers, and Philip Augustine have made All-State.

Avoyelles has never won a district championship or state title yet. We have been runner up in district twice since I have been coaching here. Yet is the key word to both.

LAFM: For the readers not familiar with Avoyelles High School, where is it located in Louisiana?

Avoyelles High is located in Moreauville which is eight miles south of Marksville.

LAFM: Let’s talk about this season. It was an up and down season for the team but the Mustangs made the playoffs before falling to eventual state champion Lutcher Bulldogs in the first round. What is your outtake on this season?

Our 2016 season was very frustrating. We had a couple of games where we didn’t show up to play and a couple we felt we should have won. We started off very slow, but we improved as the year went on. We played Lutcher tough. We held the ball for 41 out of 48 minutes and ran 78 plays to their 21. They stopped us on the 1, 5, 9, and 14 yds line. We even had a 22 play drive.

LAFM: Who are some of the seniors that you will be missing next year?

We will miss all of our seniors. We only had six but they were all important to our team. TE/DE Kendrick Williams will be missed. RB Ryheim Dupuy also will be missed. He ran for over 1000 yards the last two seasons.

LAFM: Who are some of the key players coming back for next season?

LAFM: The team did win four games but three of those wins came with over 60 points scored. What type of offense does the team run and why was the team able to score a lot of points in their wins last year?

We run the Double tight double wing offense, which is very rare in Louisiana. We scored over 60 three times last season. We onside kick after every TD. When we recover a couple onside kicks, we can hold on to the ball most of the game.

Coach Boone with RB Myron Robertson after he was awarded player of the week after rushing for five touchdowns and 244 yards on six carries in a game against Bolton. Robertson is expected to be one of the key players for the Mustangs next year. (Photo provided by Andy Boone)

LAFM: When you first got here at Avoyelles, the team had a very interesting offensive philosophy. Does that continue today and why?

When I arrived at Avoyelles High, the team had won four games in the last four seasons. Participation was and still is not very high for a 3A team. We normally field between 30-35 players so I installed the double wing offense and decided to never punt, always go for two points after every TD, and always onside kick after every score. Out of eight seasons, we have averaged 21, 28, 30, 36, 38, 40, 46, and 48 points per game. When most of your kids play both ways, I figured it’s best to stay on offense. Plus, it just feels wrong to punt. If you want the ball, you have to take it. We aren’t going to give it to you.

LAFM: The team had a very tough schedule last year. What team was the best team that the Mustangs played last season?

LAFM: Who are some of the assistant coaches that you want to give a shout out to?

I guess you can say that I have trust issues. My Coaching Staff consists of my three sons Wesley, Justus and Garrett Boone, my brother Chad Boone, my best friend from high school Kevin Savoy and Ryan Gremillion. My son Justus has been our D-Coordinator for the last three seasons.

LAFM: Is there anybody else that you want to give a shout out to?

LAFM: What is it about Louisiana High School football that makes it different from anything else?

Louisiana high school football fans are very passionate about their teams, and Louisiana produces some of the best talent in the country every year.

LAFM: What is some advice that you have for your players about the recruiting process and how to deal with it especially with social media and the latest technology today?

Recruiting has changed over the past few years. It has less to do with the coach and more to do with the players. With Twitter, Facebook, and Hudl, the players can stay in constant contact with the college coaches. There is a shortage of players especially in the smaller schools. The players need to be proactive and reach out to the schools.

LAFM: What is the best part about coaching for Avoyelles High School?

The best part about coaching for Avoyelles High is the freedom that I am given by my administration to run my program.

LAFM: For all the fans and players, what should we expect for next year?

A district championship and a deep playoff run…