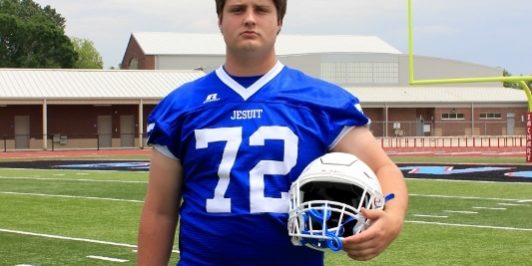 We all know that the positions that get the most notoriety and publicity are the quarterbacks, running backs, and wide receivers. They are a huge part of the football game and have the football on every play, but the unsung heroes are the members of the offensive line. Last week is an example. Jesuit RB Connor Prouet had a monster game with almost 100 yards rushing and six total touchdowns in a 56-21 win over Franklinton. It was a great performance by Prouett who is one of the most underrated running backs in the state, but he could not do it all by himself. It was the Jesuit offensive line who did the dirty work and was the key behind Prouet’s success last game and this season. Today, we go inside the trenches with one of the best position groups in the state in the Jesuit Blue Jay offensive line. Coming into the season, the Jesuit offensive line was one of the best offensive line groups in the entire state and the group did not disappoint this season. This offensive line is one of the best in the entire state for a number of reasons. For one, they are big and very physical. They are really smart and the last reason is that all of the starting offensive linemen on the team are seniors so they have played a lot of football together. The Blue Jay offensive line consists of two seniors who were featured in our magazine and the main leaders of the offensive line. They are Corey Dublin and Cameron Maheu, who both play tackle for Jesuit. At 6-3, 275, Dublin is one of the best offensive linemen in the entire state. In the preseason, Dublin was named to our 1st Team All-Louisiana Team as a guard even though he plays tackle for Jesuit. Not only is Dublin versatile but he is very tough to get around at the point of attack. He is also a four year starter at the school. Out of all the major accomplishments Dublin has had, one of them sticks out.

Jesuit OT Cameron Maheu is another senior starter along with Fletcher Lavie, Richard Besselman, and Peyton Cox. (Property of LAFM)

“I won the John Ford award last year,” Dublin said. “It goes to the best all-around offensive lineman at Jesuit.”

That award really stuck out to Dublin because he knows that there are other great offensive linemen around him on the same team. Another great offensive lineman is Cameron Maheu (6-4, 275). Although Maheu has not started all four years like Dublin, he himself is another great player who has experience playing in the always tough Catholic league. Maheu is continuing to grow and get better each and every game. He also plays tackle for the team and does a great job of blocking on the outside. As of right now, Maheu wants to play football at the next level. His top colleges are Southern Miss, ULL, and Louisiana Tech. According to Louisiana Football Magazine Editor Lee Brecheen, these two seniors make this offensive line go and provide the success that the Blue Jays have running the football.

“Dublin might be the toughest offensive line prospect in the state and I think that Matheu is a sleeper too for college football,”  Brecheen said. “Both are tough, smart, and underrated.”

Both Maheu and Dublin have a really good relationship on and off the football field.

“We are both great friends on and off the field,” Dublin said. “We study with each other and hang out on the weekends sometimes. We always talk at practice so that enables us to have a great relationship.

Even though the Blue Jays have two studs playing on the offensive line, they also need the help of a supporting cast to make the offensive line complete. The other three offensive linemen that also start on the team are OG  Fletcher Lavie (6-0, 250), OC  Richard Besselman (5-10, 230), and OG  Peyton Cox (6-1, 265). All three guys don’t get the recognition as the other two but all three of them play a key role as well. Matheu believes that every offensive lineman has a key quality that makes them unique.

“Corey is a mauler,” Maheu said. “Fletcher is mentally strong. Richard and Peyton are both really good communicators at the line of scrimmage.”

This group has played with each other for so long and they all know what their strengths and weaknesses are. Dublin knows that everybody on the offensive line needs to do their job and the rest will follow.

“It is a very important job to play on this offensive line,” Dublin said. “We all lead together. We all have the same roles to speak up and communicate towards each other.”

Every single offensive lineman by themselves has strengths and weaknesses. Some teams have one or two really good offensive linemen while the other linemen on the team are average. That is not the case for this offensive line. Everybody is big, smart, tough, and very experienced. Dublin started on the Jesuit football team that won the state championship in 2014. He would like nothing more than to end his high school career where he first started.

“Winning a state championship would be amazing for me,” Dublin said. “To go out knowing that nobody has beaten you is a great experience.”

With the combination of Dublin, Maheu, Lavie, Besselman, and Cox, many coaches would love to take an offensive line group like this one each with their own unique strengths and abilities that they can provide to the line. It must feel good if you are Jesuit Head Coach Mark Songy to know that you can heavily rely on this group to win football games. As of right now, the Blue Jays are 5-4 but play in the very competitive Catholic league.

The team has lost some really close games against really good competition like John Curtis, Archbishop Rummel, St. Paul’s, and St. Augustine by a combined 21 points. The experience that the team has had in close games and the competitive teams that Jesuit has to play every week will definitely give them a chance to win in every postseason game especially with this very good offensive line and the team has to go in the trenches to win the game. These seniors started out as freshmen and won the state championship game in 2013. The million dollar question is will they end their career in the same fashion? We will just have to wait and find out.