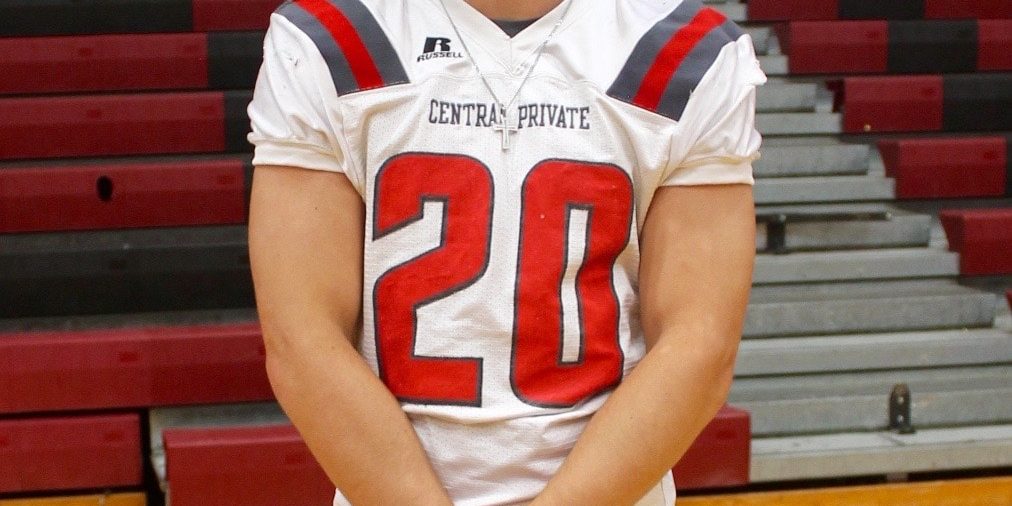 In the state of Louisiana, there are plenty of “diamond in the rough” players throughout the LHSAA ranks, but there are also plenty of them throughout the MAIS ranks as well. One of the best players throughout the MAIS football league is Central Private senior athlete Cole Averette. Not only has Averette made an impact for the Rebels over his high school career, but in middle school as well as an eighth grader. On the football field, there was nobody quite like Averette who was the star player for the last couple of seasons. Whether it was playing running back or playing on defense as a safety or a linebacker, the five year starter could do it all. Playing over five seasons and never really taking any breaks off the field catapulted Averette to huge numbers including 5,541 All-purpose yards, 59 touchdowns, 230 tackles, 57 tackles for loss, 22 sacks, seven interceptions, seven forced fumbles, and eight fumble recoveries.  As a four year starter and a five year letterman, he was a three time 1st team All-District selection to go along with being named All-MAIS. Besides being a great athlete, Averette has showcased that he is so much more than that as he maintained a 4.2 GPA throughout his high school career. As a student, Averette was named to the National Honor Society and was a part of the BETA club. Even though Averette made it look easy and has the smarts as well as the athleticism, it was his desire to do good in both that motivated him to succeed.

“For one, I guess I’m kind of lucky,” Averette said. “Both of my parents are very intelligent and I think that was passed on to me because school has kind of always come easy to me. Another reason I believe I succeed in school is because I don’t consider it as a chore, but I enjoy learning.”

Averette’s intelligence has always helped him in the classroom, but his smarts have also helped him gain an advantage over his opponents on the gridiron.

“My biggest strength is my football IQ,” Averette said. “I know a lot about the game and this gives me the ability to play multiple positions.  I can be used as a weapon in all aspects of the game.”

As mentioned earlier, Averette is a versatile football player that has played many different positions. Being a Swiss Army Knife has helped Averette improve as a football player over the years, but if he had to choose one position to play, most likely it would be on the offensive side of the football.

“I guess if I had to choose, I would say running back because nothing beats running over a guy, scoring a touchdown, and the crowd going crazy,” he said. ” That’s a hard question though because I love the game so much I don’t mind what position I play. I just want to be on the field giving it my all.”

Averette is a guy that will give it everything he has against any team no matter what the score indicates.

“In my junior year, we played our rival Silliman,” he said. “They had been on a winning streak against us for as long as I can remember, and they were the favorite to win that year also.  A huge crowd came to watch the game and I think every student at Central Private was there.  Silliman went ahead early 18-0, and at half time, our coach didn’t say a word.  We got the message and in the second half, we played our hearts out. I scored three touchdowns that game. The crowd and student section was going crazy.  We pulled the upset and came back to win 34-24.”

Playing in the MAIS league is hard intense work. With Central Private being one of the few teams from the state of Louisiana in the league, the team would have to travel plenty of hours just to play a regular season game, but for Averette, it was well worth it.

“It’s a little different in that we are one of the few Louisiana schools in a Mississippi league,” Averette said.  “We travel far distances a lot.  Our playoff game this year was five hours away.  As far as competition, there are indeed some good teams out there.”

Heading into this season, there were not a lot of high expectations for the Central Private Rebels, but the squad was able to pull off a really good year posting a winning season at 6-5 and making it to the MAIS playoffs. Even though the season as well as Averette’s high school career ended in the first round of the playoffs, Averette was really proud of the progress the team made this year and is excited about what next year’s team can do.

“I’m definitely a little disappointed that we lost first round because we should have beaten that team,” Averette said.  “Overall, I’m pleased with my season because everyone counted us out this year and said we were gonna go 0-10 and well, we proved them wrong! We played a lot of freshman this year so next year’s team is gonna have a lot of young guys with experience. They are gonna be a tough team to beat for sure.”

Even though Averette does not play in the LHSAA, his performances were noticed by plenty of colleges including Houston Baptist. For Averette, the Huskies were a perfect fit in what he wanted to accomplish as both a player and as an athlete. There were plenty of reasons why it was the right decision to spend his next four years there as a student-athlete.

“One thing would be it’s Division I,” Averette said. “Ever since I was young, I have aspired to compete with the best of the best and HBU gives me the opportunity to do that.  Also, I really liked the coaches. I haven’t known them for long, but they already feel like family.  Also with my family supporting me, I believe HBU is a great fit for me.”

Going away from a place like Central Private in which he has attended since he was four years old may be hard, but he is ready to take the next step and go out into the real world.

“I’m excited to be on my own and experience what it’s like to live in a big city instead of a small town, but I’m also excited to play some football,” he said.

Averette is putting through the work preparing for college football as he works on some areas to his game such as his flexibility as well as studying on players like Julian Edelman (Kent State/New England Patriots) to help him with his work ethic even more. However, not only will the Central Private star will be studying the playbook, but he will be also be studying something that is out of this world.

“I plan to minor in Aerospace Engineering and major in math to hopefully one day work for NASA,” Averette said.

Cole Averette is planning on doing his very best in the classroom as well on the football field. He is ready to do his part and help the Huskies become a competitor for the Southland Conference championship.

“I just want HBU fans to know that I’m coming to make a difference, and I’m going to give my all to the program,” Averette said.

Central Private’s Cole Averette was recruited to play on the defensive side of the football and will play either safety or linebacker at 6-1, 200 pounds. His versatility, work ethic, and 4.5/40 speed will make him a very dangerous defender in the Sun Belt. Certainly, Houston will not have any problem with Cole Averette on their football team.