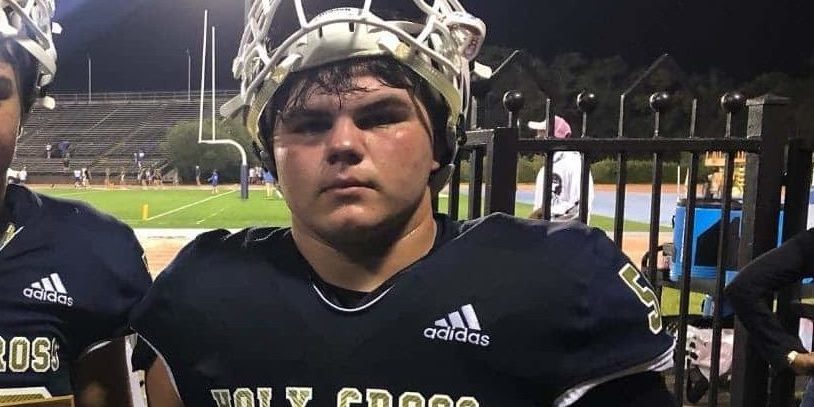 Holy Cross has started the year 2-2 including a win last week over Helen Cox 40-13. They are led by senior center Cole Baiamonte. He says that the season has been, “Definitely not the way we were expecting to start, but we are continuing to show up and put in the work and the time needed to get better.”

Cole is 5’10 and weighs 240 pounds and has a 4.7 GPA. On the field, the best part of the game for him is enthusiasm and energy. “I give everything to lead my teammates around me by example. I influence them to work hard and get better every day.” The part of his game that he wants to improve on is being able to read and see the defense and he feels that getting better at this. He said, “Adding that to my gameplay would truly enhance my performance.” Cole is currently considering schools like United States Merchant Marine Academy, Notre Dame, and Texas A&M. What he looks for in a school to attend is, “I’m looking for a college that has a great atmosphere. I want a place that I feel welcomed at, a place that can become my new home. On top of that, I want a place that will mold me into a strong, successful person and leader in this world.”

He models his game after former Baltimore Raven Linebacker Ray Lewis. The reason why he models it off of Ray Lewis is because, “The way he played the game and led those around him was relentless. His presence on the field was always known. His character was like no other. He was one of the best to ever play the game.” Holy Cross next game is October 15 against Archbishop Rummel.