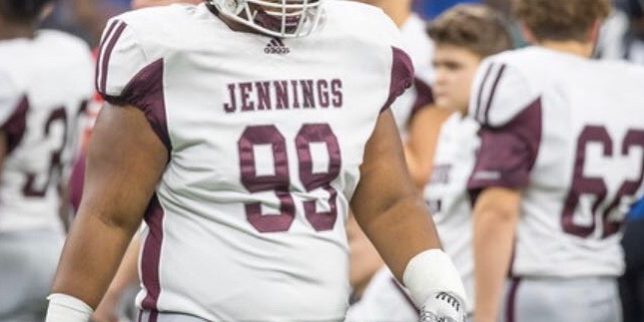 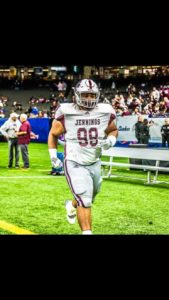 Ever since Jennings High School defensive tackle Keenan Landry has taken the field, colleges have been salivating over his services.

The Jennings product has been especially overjoyed with getting an offer from the LSU Tigers at the conclusion of his freshman season. That relationship with LSU head coach Ed Orgeron has been extremely strong since then.

“I’ve only visited LSU a couple of times, but they have a very nice campus, and I’ve had a few conversations with Coach O,” Landry said.

At 6-2, 325 pounds with 5.0/40 speed, Landry can take over and dominate an entire game on the interior of the defensive line. Also, throw in the fact that he can bench 375 pounds, power clean 315 pounds, and squat over 505 pounds is not too shabby either. Although the measurables may first come to mind about one of the best defensive linemen in the state of Louisiana for the Class of 2021, it is his motor and versatility that sets him apart for a guy of his stature. Because of that, the young and upcoming Louisiana star is modeling his game to somebody with those same skills.

“I like to watch Aaron Donald (Pittsburgh/Los Angeles Rams) because he is undersized compared to other NFL players,” Landry said. “He uses his height to his advantage in order to create the leverage he needs over taller and slower linemen.”

The longtime Bulldogs defender really showed that his junior season when he had 70 tackles, six sacks, 30 quarterback hurries, four forced fumbles, two fumble recoveries, a blocked punt, an impressive ten blocked field goals, two pass breakups, and also a couple of assisted tackles. With over 300 tackles and 20 sacks in his impressive prep career already, the high school All-American has made plenty of impressive highlight reel plays on the inside, but even he is quick to point out that his main priority is to make his teammates around him better.

“As a defensive lineman, I’m like the big brother of the defense and just knowing my techniques and setting others up to make plays makes a huge impact,” Landry said. 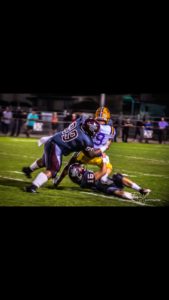 Despite the attention that major colleges and other teams have shown him, Landry has proven to be not only a special player, but also a special person to keep himself humble throughout the entire process.

Not only does the three star prospect want to improve his skills for himself, but he wants to improve in order to help finish the task, which was not finished last season, and that would be to win the state championship.

Last season, the Bulldogs made one of the most incredible Cinderella playoff runs in the Class 3A playoffs. After entering as only a number 23 seed, the team went on a run defeating higher ranked teams in each game including Carroll, Church Point, Sterlington, and McDonogh 35 by a incredible combined total of only ten points. However, the Cinderella run eventually struck midnight losing in the Class 3A state championship 51-14 to the St. James Wildcats. Still, with a lot of the starters coming back, the lessons learned could only help the Bulldogs heading into this season.

“We had a chip on our shoulder and a lot of people to prove wrong,” Landry said. ” As a team, we blocked out all of the noise and fought until the end. We knew our abilities from the beginning of the season, but it was only a matter of time for us to begin to mesh as a whole.”

It looked as if it was going to be a fantastic offseason fro the team, but due to the coronavirus pandemic, spring practice had to be cancelled for all Louisiana high school sports. Still, that is not stopping the upcoming senior leader from getting ready for the season both physically and mentally.

“I’ve been lifting weights and running a lot,” Landry said. “Sometimes, I push and pull my dad’s truck. When I’m just inside playing the PlayStation, if I lose the game, I’ll get down and do 20 push ups.”

Landry’s competitiveness has always driven him throughout his life thanks to the help from his family. Knowing Landry’s potential, he would love to be the next collegiate star to come out of the small town like Travis Etienne (Clemson) before him, but also to give back to that same small town, which has helped raise him.

“I just would love to come back to Jennings and help out the community as well as the upcoming athletes and hopefully, turn Jennings into a powerhouse high school where everyone wants to go,” Landry said.

If Keenan Landry can lead the Bulldogs to a Class 3A state championship in 2020, he could be the key to accomplishing all those goals before setting foot on a college campus.