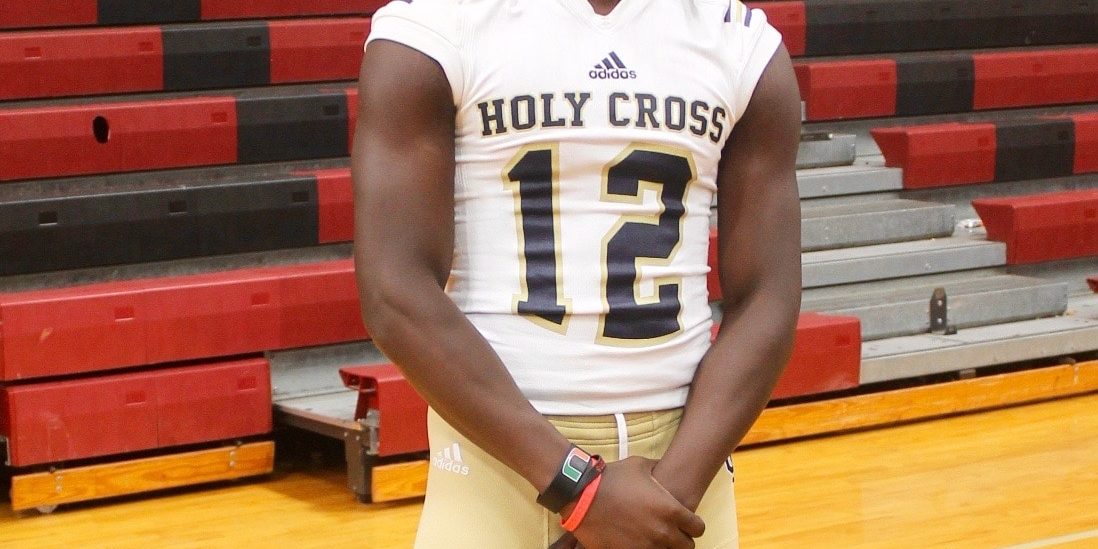 The Holy Cross football team took a step forward in its program last season. The Tigers finished 5-5 on the year, which is two games better than its previous record of 3-7. However, there is something to be said about Holy Cross’ deceiving record. With the exception of the 37-15 loss to John Curtis Christian Academy, four of the Tigers’ losses came within six points or less. Holy Cross qualified as a number ten seed in the Division I playoffs, which was two seeds higher than a year ago. The Tigers’ turnaround season was cut short after falling to the number seven seed St Paul’s in the first round of the playoffs 27-24. A player, who was key to the success Holy Cross experienced, was senior wide receiver and Harvard signee Kym Wimberly Jr. Wimberly was regarded as one of the most talented wide receivers in the New Orleans area as he finished his senior year with 475 receiving yards on 34 receptions and four touchdowns. Wimberly was an interchangeable piece for Holy Cross’ offense as he was used in multiple positions. Most notably, he received a substantial amount of reps at running the ball for the Tigers. Starting at a young age, Wimberly learned to play at a multitude of positions adding valuable versatility to his game.

“I’ve played multiple positions growing up,” Wimberly said. “All through little league, I played running back. When I reached middle school, I switched to wide receiver. I would say that was the best decision of my life. I enjoy playing wide receiver the most, but in one game in particular, I got the opportunity to play running back. It was fun going back to my roots.”

Growing up, Wimberly was active in basketball to go along with his football. Despite being a solid player, he decided to give basketball a backseat to football.

“I would say I was pretty good at basketball,” Wimberly said. “I was more of a defensive guy, but I felt like I brought value to the team. I stopped playing because I felt it was too much. I was also much better at football so I stuck with my first love.”

Wimberly was always a well-rounded athlete and tried his hand at multiple sports, but football was always the one he would prioritize because of his passion and unteachable talents.

“While growing up, I played football and basketball,” he said. “When I reached high school, I left basketball and stuck to football and track. Football has always been my first love. There was no doubt I would be playing football in high school. I was also really good at it and I believe it was a God-given gift.”

Playing in the private Catholic league in New Orleans, Holy Cross is inclined to playing some of the toughest competition on a weekly basis. Wimberly felt consistently facing a high level of competition helped him elevate his game and prepare him for the next level.

“I think we play in the toughest district in the state. Hands down. It has been preparing me for the competition on the next level,” Wimberly said. “A lot of guys, who I went up against, are playing football at the next level. This gives me an advantage because I have already faced many players who are “college ready.”

Going into last season, Wimberly was not a player that was accustomed to being placed in the leadership position. Once being elected as a team leader, he had to adjust to becoming a player who everyone followed.

“This came with a lot of responsibility,”he said. “It was great to feel like your peers are looking up to you, and I think it helped me try and do everything to the best of my ability.”

Wimberly’s leadership was best exemplified through his actions on and off the field. Wimberly wanted to be a guy that did not have to be overly vocal to illustrate his leadership intangibles.

“I always been a quiet kid, so I’ve never really been the vocal, “roo-yah” guy,” Wimberly said. “I always tried my best to lead by example, but I made an effort this year to speak more and become a vocal guy.”

Wimberly instantly became a player others looked up to even more than before once he received his offer to play at Harvard University. Wimberly received the offer from Harvard following the 2016 season when he recorded 47 catches for 670 yards and seven touchdowns. Pursuing his collegiate career at a school that will put him in a position to be successful post-football was a testament to what is achievable with hard work and focus.

“I made this decision because I realized Harvard is a dream school for many kids,” Wimberly said. “It can open so many doors for me, and it was an opportunity I could not pass up.”

Looking towards the future, having an opportunity to prove your worth is something every competitor relishes. As for Wimberly, he is excited about helping his team in any way that he can.

“I believe I can help my team with the diversity of the football field,” Wimberly said. “I can play any position and multiple wide receiver positions, which is a benefit to any offense/team.”

According to Wimberly, he wants to leave a lasting mark once his time at Harvard comes to an end.