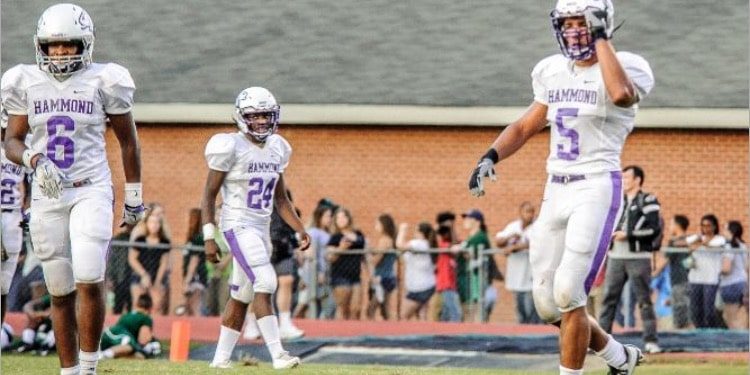 Hammond OLB Davion May gets a well deserved breather on the bench. (Photo provided by Davion May)

Do not let Hammond’s football team fool you. Even though the team was only 1-9 this year, the team has some very talented football players on their football team especially at the defensive side of the football. They are DE Chris Turner and LB Davion May. Chris Turner has had some pretty impressive accomplishments over his career. At 6’4, 225, Turner has been named All-District three times including 1st team All-District this year as well as the Defensive MVP in their district. As for Davion May, he is no slouch either at 6’2, 226 and has some impressive stats as well. In his four year career, May has had over 50 sacks, 200 solo tackles, 55 hurry ups, and 10 forced fumbles. Both guys are big, strong, athletic, quick, and fast. They have all the intangibles that you want in two star defensive players. Both guys create a one-two punch on the defensive side of the football for the Tornadoes and for offenses, they have to game plan not only to contain one guy but for two which helps out a defensive coordinator more leaving other players more opportunities to come make plays on defense. Turner and May don’t get mentioned like other great defensive players in the state because of their team’s record, but both guys are very hard to block and can create havoc for offenses. These guys will be playing on Saturdays next year and at the highest level in college football at the D-I level. Both May and Turner didn’t win a lot of games at Hammond. In fact, the team won a combined two games the last three years, but they loved their experience of playing high school football and enjoy the time they had with their teammates during their high school careers.

“I will never forget the friendships and brothers that I’ve made,” Turner said. “Al of the long hours and the early mornings that we were there putting in work together. We didn’t get many wins, but we always gave it our all on the field.”

“The memories that I will is is just Friday nights,” May said. “I miss the pregame chills and playing with my brothers and giving them encouragement.”

Hammond DE Chris Turner shows his freakish athleticism leaping in the air and batting the football down. (Photo provided by Chris Turner)

These are some guys that just love to play football and are thankful that they were given the opportunity to play even though they never made the playoffs in their high school careers. However, their football careers are not even over and both have a chance to play for some great D-I programs that have a possibility of having winning seasons. Chris Turner and Davion May have been offered by a lot of colleges and one has even committed. Since their senior football season is over, it is time for both guys to enjoy the rest of their senior year and to focus on what college they will be sending their football talents to. As of right now, Chris Turner is committed to play for Missouri, which is in the SEC, proving what type of player that he is. Missouri has been known for producing great defensive linemen and sending them to the next level. Turner can be the next great defensive end to come out of Missouri, but it is much more than the NFL talent pool that Missouri has produced at his position that has impressed Turner most about Missouri.

“It feels like family,” Turner said. “I feel like that I belong there, and that it’s a great fit for me. I really like all the coaches and how they do things there.”

As for Davion May, he has a lot of offers as well. May has receiver offers from ULL, UTSA, Troy, Kansas State, Ball State, Southern, Southeastern Louisiana University, Stephen F. Austin, McNeese State, Colorado State, Southern Miss, and Tulane. Unlike Turner, he is uncommitted as of right now and is searching for the right school for him. He does not have a number one school just yet, but however, he does have his top three schools that he is considering to attend next year.

“My top three teams are Kansas State, ULL, and UTSA,” May said.

Like Turner, May is looking at the type of school the college is and not just the football program they have.

“The things that I look for in a college is the relationship that I have with the coaches, the campus, and a good academic program,” May said.

Louisiana Football Magazine Editor and T.V. Host Lee Brecheen was impressed with how these defensive players looked this season and what kind of potential they have at the college level.

“The defense has two of the most impressive players that you will see on one team in Davion May and Chris Turner,” Brecheen said. These two players can run and look as good as any that you will see in Louisiana.”

Hammond OLB Davion May shows that he is a great pass rusher. (Photo provided by Davion May)

May and Turner have had an impressive career together and have played a lot of football together which has helped build their great friendship that they have today.

“Our relationship on and off the field is like we are brothers,” May said. “We have been through a lot to get to this point, and we have been playing with each other since freshman year so you learn a lot by that person so ever since I have been along side him, I know what I got on the other side of where I am.”

“Davion is like a brother to me,” Turner said. “I’ve known him for a long time and we have been there for each other since day one. On the field, I feel that we have a great chemistry. We can both fly off the edge and if I am not there to make a play, I know that he will be there to make it.”

Both players are very talented and have a special relationship with one another. They have great things to say to each other about the players they are and are not afraid to promote each other to other colleges that are out there.

“I would tell the college coaches that Davion is one of the most hard working guys that I have ever known.” Turner said. “He is always going to give you 100% effort. You will never have to worry about him off the field because he has a lot of character, and he was raised the right way. He is a great leader and leads by example.

Davion May says that Chris Turner has a high motor and is a great football player and will be one for years to come. They also model their game after the same player in Denver Broncos LB Von Miller. To have that relationship is great and to know that you will have two players that will stick with a program is huge. Both guys are great talents but both have great character as well and if I was a college scout, I would love to have them both on my team. As of right now, it looks like that May and Turner won’t play together at the college level, but who knows. Wherever they end up, they will both remember their friendship and their playing time together at Hammond High School. Chris Turner and Davion May created havoc for opposing offenses just like their mascot “the Tornadoes”.