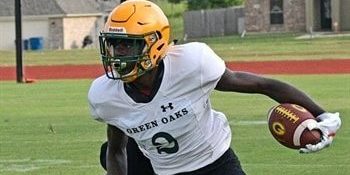 When your name is DeColdest and your nickname is “TaEvaDoIt”, then you have to live up to it. Luckily, DeColdest Crawford does live up to it as one of the top in-state football recruits for the Class of 2022. However, football didn’t start out that way for the gridiron star.

“I used to play baseball and my brother convinced me to play football,” Crawford said. “Around the summer time of my sophomore year, I got an offer from Southern, and then, I grew to love the game of football.”

At 6-1, 178 pounds with 4.5/40 speed, Crawford has received 14 other offers from Washington State, USC, Southern Miss, Penn State, Ole Miss, Missouri, Michigan State, Memphis, Louisville, Kansas, Illinois State, Arkansas, and Arizona State, but it was his experiences with LSU that exceeded his experiences with the other schools. In fact, the four star receiver committed to the Tigers early in the process back in his sophomore season.

“One reason is that the program is in Louisiana and I love playing in my home state,” Crawford said. “Secondly, I talked to my mom about it and she loved the idea from the start, and then, I knew it was a great opportunity knowing that it is the top school in Louisiana that everybody wants to go.”

Not only is LSU the flagship program in the Boot state, it has also been one of the top college football programs in sending wide receivers to the NFL including one receiver that the Green Oaks High School receiver has enjoyed watching.

Crawford has also gotten the chance to talk to some former LSU receivers to on their experiences in Baton Rouge.

“Yeah, I’ve talked to Terrace Marshall Jr. (Parkway High School/LSU) a lot,” Crawford said. “He welcomed me on my visit with open arms and told me how it was going to go in the film room or on the practice field.”

Crawford will also not become the first big time talent to take his talents to Baton Rouge from Green Oaks High School as Tre’Davious White (Buffalo Bills) also started his football journey as a member of the Giants squad. Now, the future LSU recruit is getting some pointers from a current NFL All-Pro defensive back on how to go through this football journey.

“I haven’t talked to Tre’Davious in person, but I have talked to him through Instagram,” Crawford said. “He has encouraged me to keep up the good work.”

Right now, Crawford is continuing to put in the hard work. Despite being an LSU commit and having a great high school career with 119 catches for 2,013 yards and 17 touchdowns over three seasons, Crawford wants to be known more than just a great receiver.

“I need to be more of an athlete in all three phases of the game including on kick return and punt return,” Crawford said.

Not only for Green Oaks, but also at LSU, Crawford feels like his current coaches and future coaches are going to put him at the best position to succeed.

With a name and a talent like DeColdest Crawford, it is not only those qualities that make him stand out, but he wants to make sure to set the record straight that he is coming in next season to work.

“I am going to come in, work hard, try my best on the field, and do good in the classroom” Crawford said. “I am going to try and be the best version of me.”

That best version of DeColdest Crawford could potentially become one of the hottest receivers in the country when all said and done.

Click the link below to check out DeColdest Crawford’s sophomore highlights: