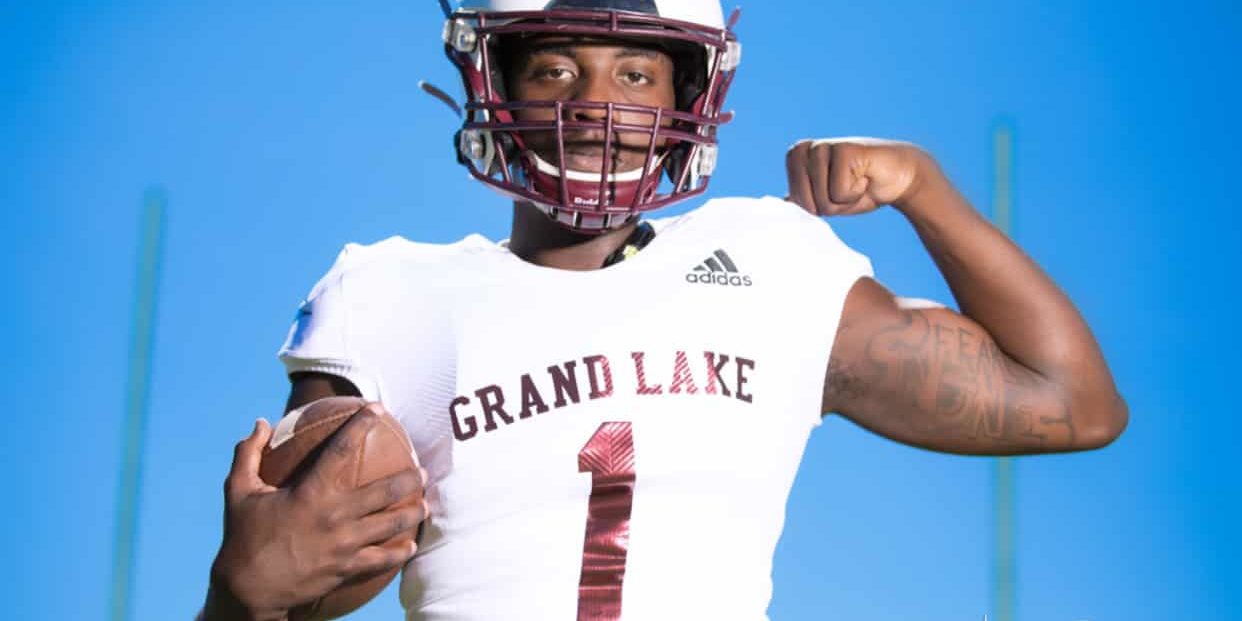 Grand Lake High School athlete Eli Fountain is a jack of all trades and one of the best pure athletes in the Lake Charles area. Fountain is naturally athletic, but it is his confidence that helps him unleash his athleticism even more.

“This year recently is when I started to realize I could have a career in football,” Fountain said. “I’m a confident guy, but to have the teammates that I have and the coaching staff that I have believe in me and my abilities means something. I’m not just playing for me. I’m playing for them too.”

That team Fountain is referring to is the Grand Lake Hornets. After moving from Cameron Parish, it has been a long hard journey for this 6-4, 207 pound athlete.

“What a lot of people don’t know about me is Cameron Parish is my home,” Fountain said. “I relocated to Lake Charles after Hurricane Ike. If that didn’t happen, I probably would have been a South Cameron Tarpon like the majority of my family so moving back to Grand Lake was really easy.”

With South Cameron no longer having a football program, Fountain is gracious to have his opportunities on the football field for the Grand Lake Hornets.

“I approach each game with the same determination and focus,” Fountain said. “My teammates and I have a lot to prove, so I just try to stay locked in, focus on the game plan, and execute it to the best of my abilities.”

Fountain’s previous experience playing sports for a Class 5A powerhouse in Barbe High School gives him a different perspective that will help his teammates at Grand Lake.

“I guess it was just time for me to go back home,” Fountain said. “Grand Lake and Barbe are both prestigious schools. Obviously Grand Lake is smaller so it feels more like family playing here. I’m not just playing for myself. I’m playing for the community as a whole, which is even more important right now especially after the devastation from Hurricane Laura.”

Although Fountain’s name is getting some steam playing football, this is actually really his first playing experience since his early days at Barbe, which is crazy considering how many positions that he lines up at for the Hornets.

“At Barbe, I played tight end and cornerback,” Fountain said. “At Grand Lake, I am playing quarterback, punt returner, kick returner, safety, and running back. My favorite position is quarterback because I’m able to do a lot of things including passing, running, seeing the game, and leading my team. I like to put on a show.”

It certainly has been a show for the Hornets so far as the team has jumped to a 2-0 start. The versatile Grand Lake playmaker has been entertaining no matter what sport he plays whether it is football, basketball, or baseball. In basketball, Fountain is one of the best players on the team and as a baseball pitcher, he can throw up to 89 miles per hour as a left handed pitcher. Bringing versatility playing multiple sports has helped him get accustomed to adjusting on the football field.

“Basketball has helped me become a better football player because my court awareness allows me to see the play unfold before it actually happens,” Fountain said. “Basketball has also helped me with my rhythm in football. For example, in basketball when you have a bounce pass, it has to have the right rhythm and speed. I use that same concept, which is the “right touch” when throwing to my wide receivers. Pressing on defense in basketball helps me with my defense in football. It’s the same concept. I want the ball, so I go get it. It’s been too long since I’ve pitched in high school so I’m looking forward to that. You have to be mentally tough pitching and playing baseball in general. It’s the same in football.”

In speaking of playing different sports, this three sport athlete is looking to continue his athletic career while majoring in business.

“I want to be a college athlete,” Fountain said. “Whether that’s playing football basketball or baseball or some variation of two of those sports, I know I want to continue my athletic career in college.”

For now, Fountain is just worried about his local community, especially during a COVID pandemic and hurricane season.

“Stay safe and encouraged,” Fountain said. “The pandemic has been hard on everyone and obviously, Hurricane Laura was a big blow to the community. Now, with evacuation orders one effect again, I just want everyone to stay safe and know that we can get through any crisis together because we’re hornet strong. I’m proud to be a Hornet and when things get back to normal, our team is going to bring the city a championship. Our team’s going to keep working hard, looking forward, never getting complacent because the job’s not done.”

Hopefully, overcoming all of the adversity Fountain and the Hornets have gone through will result in great outcomes that will wash all the negativity away.

“We want to be the last team standing at the end of the year and win a championship,” Fountain said.

There are not a lot of people that can be the best player on a team in three different sports and even though that makes Grand Lake’s Eli Fountain unique in that regard, it is his positive attitude through tough situations that certainly solidifies him as a jack of all trades.