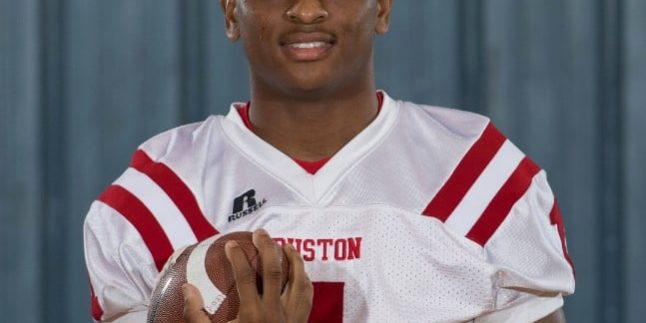 Coming off of a solid 7-2 season, Ruston High School earned a birth in the Class 5A playoffs. Ruston has consistently been a power in the top division in Louisiana. The Bearcats averaged 32.1 points per game and the primary player behind the offensive production is senior wide receiver Donald Johnson. Last season, Johnson recorded 34 catches for 654 receiving yards and six receiving touchdowns. Johnson’s skill set was a key to the success Ruston managed to have last season. From a very young age, Johnson was introduced to tackle-football.

“I’ve been playing tackle football since I was six-years-old,'” Johnson said. “I played in the 7-8-years-old league.”

Over the years, Johnson has played a variety of positions, introducing him to different elements of the game.

“I’ve returned kicks, played running back, corner back, and wide receiver,” Johnson said. “I enjoyed running back the most because of all the touchdowns, but fell in love with receiver because you can make one play and change the entire game. At running back, you have to get in a rhythm.”

His experience playing a plethora of positions greatly benefited Johnson in high school due to the way head coach Jerrod Baugh used him.

Throughout high school, Johnson played multiple sports in high school such as baseball, basketball and ran track. With being the elite athlete he is, Johnson excelled in all of them. In addition to that, Johnson played varsity baseball for Ruston as a freshman. However, Johnson eventually made the decision to focus solely on football.

“Football started to take me over and I really wanted to take my game to the next level,” Johnson said. “Sophomore year, I was starting to commit to football, but I wasn’t strong enough to dominate and I wanted to change that.”

Johnson began to do just that. Over the course of his junior year, Johnson made strides at being an elite wide receiver. Johnson began to showcase his talents and display what he is capable of doing. Many of his games stood out to many observers, but one stood out to him in particular.

Regardless of his eye-popping numbers against Natchitoches Central, Johnson enjoyed facing Ouachita Parish over any other school.

“Whenever we play Ouachita, that’s when the dawgs come out to play and the people come out to watch,” Johnson said. “Playing against your friends that you know are good players and are also seeking success reminds you of backyard football.”

Johnson took great pride in playing against his friends and proving who was the best of his peers. He acknowledges not playing high school football anymore will be a very tough transition for him.

“I will miss Friday nights, playing under the lights, and having the whole city I grew up in shutting down to come watch us play football,” Johnson said.

Moving on to college football, Johnson will be adjusting to a new brand of football and new people to play with.

“I have signed with Grambling State University,” Johnson said. “I grew up going to Grambling games and Grambling is home for me. Who don’t want to play in their own backyard?”

Once receiving an offer from Grambling, Johnson wasted no time signing with his dream school. Things will be different for him, but he is looking forward to the change.

“The biggest adjustment will be the new schedule, working out, going to class, practice, and studying,” Johnson said. “I look forward to playing Prairie View with them having a new head coach in Coach Eric Dooley. Coach Dooley was a mentor to my game and also my life.”

“I want to win SWAC Freshman of the Year, make the All-Academic team, and win a ring,” Johnson said.

Johnson welcomes any new challenges with his new journey and is ready to make a splash for the Grambling Tigers.