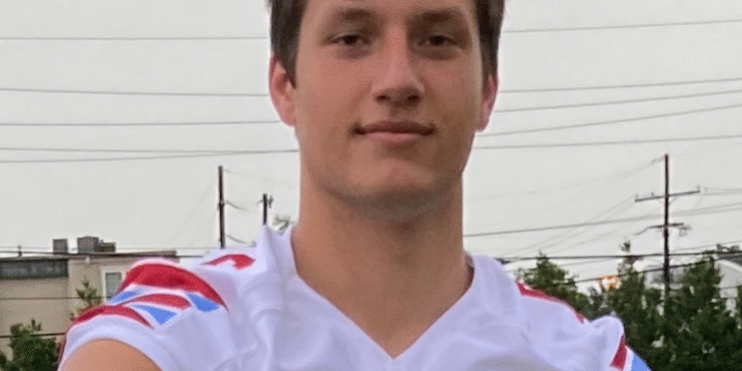 If you happen to be a big Louisiana sports fan, you would perhaps have heard about the Wickersham family. The patriarch of the Wickersham family happens to be one of the greatest LSU quarterbacks of all time in Jeff Wickersham (Miami Dolphins), who had thrown for 6,921 yards in his prolific career from 1983-1985. Jeff’s oldest daughter Shelby Wickersham is continuing to carry on the athletic family tradition today as the starting pitcher for the LSU softball team. Now, Jeff’s only son and Shelby’s younger brother is starting his own athletic journey. Kyle Wickersham is one of the best quarterback recruits in the 2021 class and has enjoyed a very interesting journey just to get to this point. For Kyle, growing up in an athletic family with his father Jeff, mother Stacey, and his sisters Shelby and Lindsey has helped him become the competitor that he is today.

“Growing up in an athletic family has helped me become a better competitor,” Kyle said. “It taught me how to deal with adversity and learn from it.”

Adversity is something that Kyle has gone through over his career. Despite being an athletic and physical specimen dating back to his early years at Jesuit High School as well considering the success of his father at the quarterback position, it would make sense for Kyle to start at an early age under center. However, there was a different calling card at the start of his career, which has been running down field and making tackles on kickoffs.

“Playing special teams has definitely helped me by teaching me how to protect myself in the open field,” Kyle said.”It taught me to keep my shoulders low while running and always deliver the hit.”

At 6-3, 225 pounds, Kyle would be going downfield and making big time hits like a linebacker on special teams. Although that is not exactly what one would see in a quarterback, that physicality and toughness were great qualities Kyle would learn down the road when he does get his chance as the starting quarterback. That chance would come not at Jesuit High School, but at Archbishop Rummel High School where he transferred at the start of his junior season in 2019. Kyle definitely took the most of the opportunity as all he did was lead the Rummel Raiders to an undefeated season and the program’s third state championship victory. It was definitely a first year to remember for the championship winning quarterback, but like any quarterback in his first season, Kyle thought that there was a lot of room for improvement.

“I feel like I did well enough to help our team win, but I definitely have room to improve and will do so,” Kyle said.

After throwing for 2,000 yards and 20 touchdowns, Kyle made the plays when the team needed them knowing that he had such a dominant defense behind him. For Kyle, playing against one of the most dominating defenses in the history of Louisiana high school football every day in practice made things a lot easier for him in his first season on Friday nights.

“It was extremely fun playing with the guys we had last year,” Kyle said. “Our team was loaded with talent, and it made all of our jobs easier. Going against our defense in practice was such an advantage because it taught me to get the ball out of my hands quickly and to know where I’m going with it based on pre snap reads.”

Throughout the course of the season, Kyle played his best games on the biggest stages whether it was against John Curtis High School in the regular season or against Catholic High School (B.R.) in the state championship game. Playing in high pressured situations is what quarterbacks are judged on the most, and it is safe to say that Kyle has already faced his fair share of high pressure situations.

“My biggest strength as a quarterback is dealing with pressure,” Kyle said. “Our team was constantly playing top ranked opponents, and I was able to play calm even when the games came down to the last second.”

Kyle took a lot from what he has seen from another recent championship winning quarterback to deal with that type of pressure.

“Joe Burrow (Ohio State/LSU/Cincinnati Bengals) has definitely been an inspiration to me and someone I look up too,” Kyle said. “I admire his decision making abilities and hope to be able to understand defenses like him one day.”

Not only Kyle has the physicality, athleticism, and calmness about him in the biggest situations, but he also has a lot of other natural similarities to his own father that will help him his senior season and beyond.

“My dad and I both prefer to throw the ball before we run,” Kyle said. “We’re both traditional drop back passers. The main difference I see between us is that my dad was more of a shifty runner and I’m more of a hard nosed runner.”

Being a hard nosed player, Kyle knows it might not always be flashy, but is effective and gets the job done. To him, nothing matters more than what is up on the scoreboard at the end of the day.

“My goals this season is to remain undefeated,” Kyle said. “I don’t want to lose a game for my whole high school career.”

With a lot of its main offensive and defensive stars graduating and moving on to play DI college football, a lot of eyes are upon number 6 even more to lead the Rummel Raiders to a second straight state championship.

“I feel like I can definitely improve on getting back in my drop faster to allow me time to read the defense,” Kyle said. “I will definitely be working on my footwork this season.”

Being the senior leader of the program in just his second year as a starter is a big challenge, but the second generation quarterback has already proven himself that honor already. In speaking of honors, Kyle was one of only 20 players chosen to be featured on the front cover of the South version of Louisiana Football Magazine.

“Being featured on the magazine was a dream come true,” Kyle said. “Seeing yourself on a magazine with Louisiana’s best talent was truly a blessing.”

Kyle is also extremely blessed to receive a lot of college attention come his way as the three star quarterback prospect has received offers from Nicholls State, Tusculum University, Tennessee Martin, Cornell, Harvard, Fordham, Georgetown, Southern Illinois, Air Force, Richmond, Southeastern, McNeese State, Princeton, Penn, Columbia, San Diego, Dartmouth, and Idaho State. Although Kyle will not be joining his father and his older sister in playing at LSU, Kyle is embracing his own path by committing to the Richmond Spiders.

“Richmond is an amazing place that has a winning culture,” Kyle said. “They made my family and I feel like we were family to them.”

Kyle is not only modeling playing the quarterback position after his dad, but he is also going to Richmond in order to pursue a business degree in order to help his dad where he is now the president of Shipyard Supply’s. However, Kyle is focused on his very promising football career. Because of his versatility and big bodied frame, Kyle has the athletic ability to play many different positions, but being the son of a successful quarterback, there is only one position right for him.

“I would be willing to play any position to help my team win, but my heart is set on playing quarterback,” Kyle said.

One could definitely not argue with that statement, especially since he has not yet lost a high school football game as the starting quarterback. Even though the journey had some unexpected twists and turns starting out as a special teams gunner and now ending up as one of the best quarterbacks in the 2021 class. Kyle Wickersham’s journey may be different than the rest of his journey, but that just makes his story even more special.