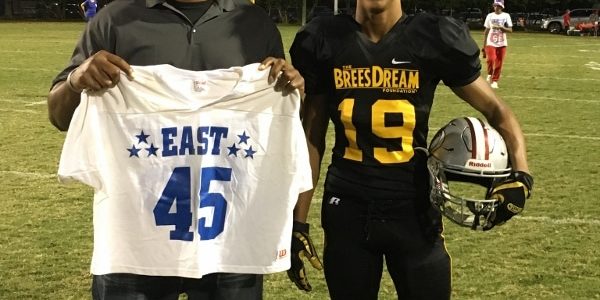 Roshaun Matthews (92) in action against Florida when he played on defense at LSU. This was the game where LSU brought back the magic in 1997 when they upset #1 Florida. (Photo courtesy of LSU football)

With Christmas time approaching, it is time to focus on family and friends. That is what the Christmas season is all about. Also, similar interests can bond a family together including fathers and sons. For a father-son relationship to be special and unique, they both must have a similar interest that both of them enjoy and are good at it. Many father-son activities include hunting, fishing, etc. but for Roshaun and Joshua Matthews, it is the sport of football. That relationship started all the way back with Roshaun and his father.

“My father never played the sport of football because he was stationed at Vietnam and was a LA state policeman in the city of New Orleans for 30 years,” Roshaun Matthews said. “However, he enjoyed it, and he had it on T.V. all the time when I was a kid.”

Roshaun Matthews was born in New Orleans and that is where he grew up until he moved his 7th grade year. The family moved to Baton Rouge and Roshaun decided to attend a school that was up and coming in Christian Life Academy and started playing football his 8th grade year, but it wasn’t until his sophomore year that he was going to bring football in his life and consider it as a career choice.

“In my 10th grade year, I was named 2nd team All-State and 1st Team All-District as a linebacker,” Roshaun Matthews said. “I did not win the District Defensive MVP, but I was one of the candidates that was considered for the award. That is when the light bulb came on in my head, and I realized that I could be really good at this especially when I received these accomplishments in my 10th grade year.”

Roshaun Matthews would go on to have a great high school career. In fact, he was the first person to sign any kind of athletic scholarship at Christian Life. Before he arrived, the Crusaders never made the playoffs. In his sophomore year, he made the playoffs as the Crusaders posted a 7-4 record but lost in the first round. However, his senior season would turn out to be a very special season for the Crusaders and their football program in 1994.

“Christian Life did not make the playoffs until my 10th grade year when we went 7-4 and lost the first round, but my favorite memories came my senior year,” Roshaun Matthews said. “We went 10-0 in a district that was loaded with powerhouse teams such as Kentwood, Southern Lab, and Chapel Trafton (Dunham currently). We also made the semifinals where we lost to Evangel Christian, but I would never forget that season.”

Now, that Roshaun’s high school career was over, he  was trying to find out where he was going to play his college football. According to Roshaun Matthews, he was a late bloomer in regards to recruiting, but he had some options.

“I had some offers from every in state teams but also some other teams like Baylor, Southern Miss, and Middle Tennessee State University,” Roshaun Matthews said. “Phillip Ironside, my high school football coach, played quarterback at Middle Tennessee so that was one of my top schools.”

However, one coach and one player helped change his entire mind on where Roshaun was going to play his college football.

“In 1994, LSU Head Coach Curley Hallman and his staff were out of Baton Rouge, and Gerry DiNardo came in,” Roshaun Matthews said. “He promised that he was going to bring back the magic to the LSU program, and that he was going to keep all the talent in Louisiana. That attracted the attention of Kevin Faulk, who was probably the number one player in the country at that time, and he committed to play for LSU. Then, everybody else followed including Todd McClure (former Atlanta Falcons center) and myself.”

Roshaun Matthews did not necessarily have a lot of playing time at LSU as he served on second team defense at defensive end and on special teams, but he stuck it out and played four years for the Tigers. However, things happened that made him want to transfer to play for another football program.

“In 1998, we were ranked in the top ten in the preseason rankings, and the season did not go as planned as we went 4-7,” Roshaun Matthews said. “Coach DiNardo got some more in-state talent, and that is when I realized that I was not going to get that much playing time so I asked Coach to transfer. He told me that he was not going to let me until I graduated. I intended to graduate anyway so I was granted my transfer.”

Roshaun Matthews received a call from Southern Head Football Coach Pete Richardson about an opportunity that he could not pass up.

“Coach Richardson talked to me, and he said that he was going to give me a fair opportunity to play,” Roshaun Matthews said. “That was all I needed and that year in 1999 playing for Southern was the most fun playing football that I ever had.”

After his one year with Southern, Roshaun decided to play pro football. From 2000-2005, he traveled to different places and played for different organizations.

“I first got an opportunity to play for the New England Patriots in 2001, and then, I got cut,” Roshaun Matthews said. “I worked out, trained, and then, I got a call from the expansion developmental league NFL Europe. I played for Amsterdam where I lead the league in sacks and was actually named defensive MVP in 2001, but came home and was activated to play for the Baltimore Ravens in 2001. I got cut by the Ravens later. I went home, gathered myself, and went on the practice squad for the New Orleans Saints. Then, for the following two years, I was with the Chicago Bears.”

Even though the journeyman defensive end constantly moved to different teams, it was injuries that derailed his career. Roshaun Matthews had two knee injuries on the same knee and was put on injured reserve when he was with the Bears. He actually had one more stint with the New Orleans Voodoo of the Arena Football League in 2005, but after that, Roshaun decided to hang it up and finish his football career.

Now, Roshaun Matthews spends time with his family and shares the sport he loves with his sons including his oldest son Joshua, who happens to play wide receiver for Dunham High School in Baton Rouge, LA. At 6’0, 175,  Joshua Matthews is a different player than his father as he plays wide receiver while his father played linebacker and defensive end. However, both see similarities in themselves when they watch each other play.

Dunham Wide Receiver Joshua Matthews (7) shows his jumping ability going up and getting the football. (Photo provided by Steve Johnson)

“Joshua is a very intelligent football player who is a late bloomer for recruiting,” Roshaun Matthews said. “He is kind of like me when I was in high school in regards of trying to find the college to play for.”

“I have never seen my dad play in person because I was too little,” Joshua Matthews said. “I do watch his film though, and he had high intensity when he played on the football field. I am a quiet person off the field, but on the field, I have that high intensity as he had.”

Like his father, Joshua has enjoyed a very productive high school career. This year, Joshua Matthews had over 600 receiving yards and six touchdowns. He was named 2nd Team All-District this year and Honorable Mention his junior year. His most memorable play came during his sophomore year when he caught a game winning Hail Mary against Holy Savior Menard. Also, he was invited to play in the Baton Rouge All-Star Game just like his father when he was playing for Christian Life. As of right now, Joshua is trying to find his school that he wants to pursue his career in. Right now, he is wide open in regards to colleges and just wants an opportunity to play at the next level.

“I just want to tell all the college coaches that I will grow to be 6-3,” Joshua Matthews said. “I am a hard worker, and I continue to work hard on my craft. I am a good student-athlete as I have a 3.5 GPA, and I am determined.”

Joshua Matthews realizes that his father has been through it all and has given him plenty of advice on how to deal through adversity.

“He told me that he was going through some rough times with the Patriots,” Joshua Matthews said. “He just keeps on telling me to keep working hard and to always keep God first. I am very honored to have a dad like that. He has been there with me through thick and thin and cannot thank him enough.”

Football has bonded the Matthews family, and it has brought them together. For a lot of people, football is just a sport. For others, it means much more than that. This sport has made a father son relationship even stronger.

“We all played it, and my late grandfather loved it,” Joshua Matthews said. “They were the reasons that I wanted to play, and to have that connection with them is special.”

“I always told other friends that football is the best teaching sport in life,” Roshaun Matthews said. “In football, you have to learn to get up when you get knocked down. You have to learn to work hard, work together, and be a part of a team. It’s not about playing in the NFL. It is about using football to learn to use those characteristics and to learn those personality traits to become successful in life. Football is a life sport.”

Football is indeed a life sport especially for Roshaun and Joshua Matthews.

To keep up with Roshaun and Joshua Matthews, here are their twitter handles:

Also, from all of us here at Louisiana Football Magazine, Have a Merry Christmas and a Happy New Year!!!!