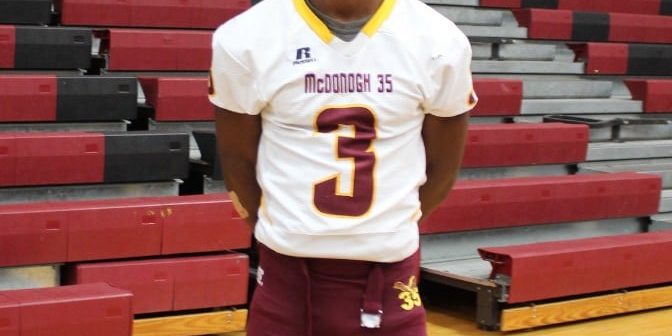 McDonogh 35 High School completed a winning regular season at 7-3 last year losing to only some of the best programs in New Orleans such as St. Augustine High School, Edna Karr High School, and Warren Easton High School. The Roneagles leaned heavily on their star-running back Eddie Tillman III to help spark their success. Tillman was responsible for the bulk of the offensive production for McDonogh 35.

As a player who comes from an athletic family background, it is not a surprise that Tillman is recognized as one of the premier athletes in the state of Louisiana. Tillman’s parents were both athletes in their own respective sports: football, basketball, and track & field.

Tillman has been playing football for 10 years playing defensive end and linebacker before running back. On the contrary to his time on the offensive side of the ball, Tillman had the opportunity showcase his aggressiveness and tackling skills the defensive side.

“The position I enjoyed was defensive end because I loved to tackle,” Tillman said.

Throughout his high school career, he played basketball and ran track to compliment his football skills.

“I was very successful in track and very decent in basketball,” Tillman said.

Tillman made the decision to stop playing basketball in fear of injuring himself and sidelining him for football. Along with risking an injury, his love for football trumped playing any other sport.

“I committed to football because I found a passion for the game,” Tillman said. “I also was skateboarding at the time and I chose football because of the benefits it brought from not playing for school to the NFL.”

Over his high school career, the games with the most hype were against the Roneagles’ archrivals Edna Karr and St. Augustine. Those games are the most intriguing because of what it meant to the schools and to the fans.

“I have a lot of memorable high school games, but my most memorable game would be my first game ever as a starter during my junior year,” Tillman said. “I ran for 153 yards with only a few carries and one touchdown. It was memorable because people were downing me the entire off season.”

Since taking over his junior year, Tillman never looked back and became a primary leader of his team. However, leadership was not a foreign role to Tillman as his first time leading a team was at a very young age.

“I’ve been a leader on a football team since I was 9-years-old,” Tillman said. “It wasn’t hard for my peers to listen to me and I hyped up everyone when they were downing themselves. I was more of a vocal leader. I spoke up to people who were nervous or angry and got their minds focused and calm.”

Those leadership qualities will translate as he prepares to play college football at Florida A&M University.

“I care to this decision because I will have a bigger and even better bond with my quarterback from high school and their game plan fits my playing style well,” Tillman said. “I think the biggest adjustments will be the speed of the game and getting to know the formations and plays.”

With his unique speed and acceleration, Tillman could give Florida A&M a huge lift immediately. He will also be a positive presence for the program on and off the field.

“Something I believe I can help my team with is bringing strength and explosiveness to the weight room and field,” Tillman said.

One day, Tillman wants to be a strength and conditioning coach at the high school or college level. He also wants to go back to college for physical therapy. Being around the guys he grew up and built relationships with will be one of the major components of high school football Tillman will miss.

“The one thing I’m going to miss the most about high school football is my teammates. The bonding we had, the games we won, the games we lost, etc. We all were brothers on and off the field.”

As Tillman looks to the future, he admits he would not be in this position without the help and guidance from others in his corner.

“My success will go to God first. Without him, I would not be where I am,” Tillman said. “I want to give thanks to my grandparents and parents for allowing me to pursue my dream. I will also give thanks to my strength coach Cornell Williams and physical therapist Arrid Hansell.”

Tillman is ready to be the next person in his family to carry the torch and pursue his dream as a football player. Though he is not one of the most notable names in the state, he intends to make sure everyone knows who he is and what he is capable of.