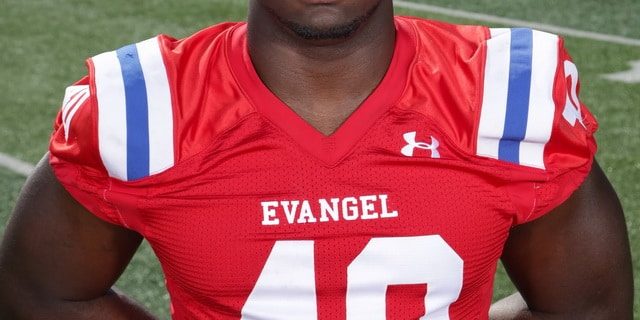 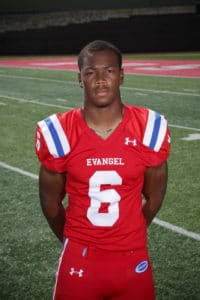 Ever since the school’s inception in 1980, Evangel Christian Academy has established itself as one of the best football programs not only in the state of Louisiana, but in the entire country. Just look at what the football program has accomplished as the Eagles have won over a dozen state championships since 1993. Not only have the Eagles got the wins and the titles, but there have also been a lot of famous alumni that put on the Red, Blue, and White. To name a few, QB Brock Berlin (Florida/Miami/NFL), QB John David Booty (USC/NFL), QB Josh Booty (LSU/NFL), LB Keyunta Dawson (Texas Tech/NFL), FB Jacob Hester (LSU/San Diego Chargers/Denver Broncos), LB Jermauria Rasco (LSU/NFL), and WR Trent Taylor (Louisiana Tech/San Francisco 49ers) are the more familiar names. The list of former Evangel Christian Academy players that were or currently in the NFL can change especially with last year’s senior group. LB Micah Baskerville (LSU), DE Davin Cotton (LSU), DB Ar’Darius Washington (TCU), DE Myles Cole (ULM), and FS Jarrick Bernard (Oklahoma State) all signed with DI colleges. Even though last year’s group was top heavy with DI recruits, this year’s senior group, coached by Byron Dawson, has a chance to be even better as a whole. Louisiana Football Magazine’s recruiting specialist Lee Brecheen was just in Shreveport last weekend and got the opportunity to catch up with the Eagles. Brecheen was very impressed with how good this group was. The senior group is headlined by the only two players that were committed to DI programs in this year’s class for the Eagles so far in DT Elijah Chatman (SMU) and OLB Na’Drian Dizadare (Oklahoma State).

“If you see Elijah Chatman practice in full pads like I have in a full game, you will saw wow,” Brecheen said. “Chatman is not tall, but he is special. He runs a 4.7/40, benches over 400 pounds, and only knows one speed, which is 110 percent on every play.” 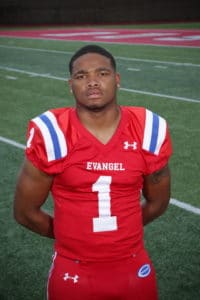 “Na’Drian Dizadare is a Dave Aranda (LSU defensive coordinator) type of player,” Brecheen said. “Dizadare looks the part and now he has shown that he is a big time player.”

Not only Brecheen has had high praise for them, but SMU and Oklahoma State have shown that high praise as well so much so that both schools have offered a lot of opportunities for both players.

“SMU told Elijah Chatman that he will get the opportunity to play both fullback and defensive tackle,” Brecheen said. “Oklahoma State has given Na’Drian the option to play either outside linebacker or defensive end once he arrives on campus.”

Under Byron Dawson, it has been all about the Eagle defense compared to the high flying passing attack offense that everybody watched at Evangel in the 1990’s. Even though the offense may not be as explosive as it was in the late 90’s, it does not mean that the Eagles lack skill talent. In fact, with all of the standout players at Evangel Christian Academy, there were two skill senior playmakers in slot wide receiver Horatio Ruffins (5-8, 170) and running back Tamauge Sloan (5-9, 200) that have stuck out the most for Brecheen when he got the chance to saw them play last Thursday. 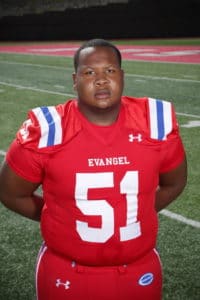 “Horatio Ruffins is a super big time wide receiver,” Brecheen said. “Horatio has not been able to get the playing time the last couple of years because of all the DI players that were ahead of him, but he is a SEC caliber player himself. He is the best slot wide receiver in the state along with Jacob Bernard (Lakeshore.)

“Tamauge Sloan is another SEC caliber player,” Brecheen said. “Sloan has really broke out this season along with Michael Hollins (U-High).”

Both Sloan and Ruffins are having their best seasons yet and have received some interests from colleges so far, but right now, they are not looking too far ahead and not worried about college. They are focused on the rest of their senior seasons.

“The mindset is to give God all the glory and have fun while playing,” Sloan said. “My message to the team is to stay focus and don’t let up.”

A group that does not let up on this team is the offensive line. Up front, the Eagles have one of the strongest units in North Louisiana with players like Christian Perry and Alvin Ford leading the way. At 6-4, 285, Ford has generated interests from some SWAC schools and has already received an offer from Texas State. Meanwhile, his two time All-District teammate Perry, who is 6-2, 295 pounds, has a couple of teams that are looking at him right now. 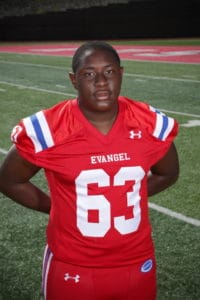 “There are some teams that have shown interest so far,” Perry said. “I have been in contact with Central Arkansas, Arkansas Pine-Bluff, and Louisiana Tech.”

Also, on the offensive line are two twin brothers Jakauri Lovelace (6-1, 270) and Trevon Lovelace (5-9, 220). The Lovelaces are related to each other, but both each possess a skill set, which makes them unique from each other. Jakauri has a chance to play on the offensive line at the next level while Trevon, according to Coach Dawson, has a chance to be a really good long snapper at the next level. Just like the rest of his teammates Jakauri is enjoying the moment now especially since he gets the rare opportunity to play alongside his brother.

“It means a lot being able to play with my brother on Thursday and Friday nights,” Lovelace said. “Playing with my brother has built an even stronger trust and has brought me and him even closer.” 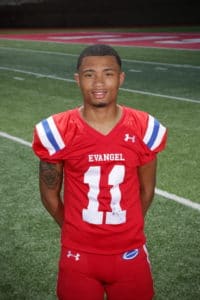 “Jonathan Terry has kicked a few game winning field goals over 45 yards in games and easily over 50 yards in practice,” Brecheen said. “He is a no brainer DI.”

With all of these guys not only on one team, but in one grade, there should be plenty of college coaches visiting Evangel Christian Academy. December is far away from right now and right now, the team’s only goal is what they can control, which is their performances on Friday nights.

“The mindset is to just take one game at a time and play hard every snap on the field,” Perry said.

If the Eagles can do that with all the talent they have on their team, there is no question what team will be one of the favorites for the Division I state championship come playoff time.