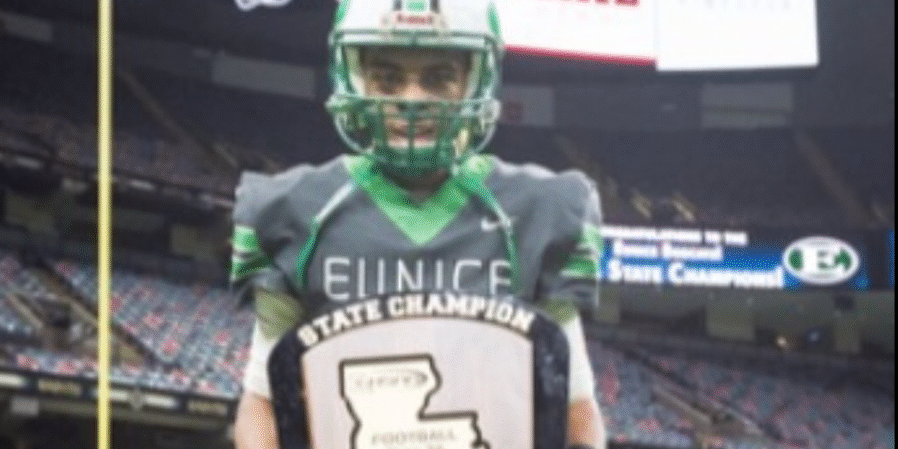 All of the Louisiana high school football teams are going through the Coronavirus pandemic, but there are other teams that are going through not only a pandemic, but also going through a head coaching change as well. For the Eunice Bobcats, the program is not trying to replace any other coach, but the most successful football coach in the school’s history as longtime coach Paul Trosclair has stepped down due to coronavirus related issues. It was a great 25 year run for Coach Trosclair, which included 247 victories, two state championship runner-ups, and a state championship in 2018, which was the program’s first in 36 years. In speaking of the 2018 state championship victory, the quarterback leading the charge that season was a young sophomore by the name of Simeon Ardoin. Overcoming adversity and the odds is something hard for professionals to deal with, but Ardoin was dealing with that same pressure in order to help the Bobcats make history.

“It was an amazing feeling,” Ardoin said. “I was doubted by many people, and the Daily Advertiser made an article about me wondering if I can handle the pressure and throw the ball. You see the lights, but in my head, I don’t feel pressure. I apply it.”

Since his sophomore year, Ardoin continued to evolve and improve his game after winning the Class 3A state championship against the Sterlington Panthers. Last season, the Bobcats not only had to defend its state title, but also had to do so while moving up to play in 4A. As a junior, Ardoin made a lot of plays by completing 74 of 135 passes for 1,103 yards and 13 touchdowns while running the football for 475 yards on 89 carries and five more touchdowns. Still, the dual threat quarterback thought that he could have done a better job putting his team in better position to win games after going 9-3 and advancing to the second round of the Class 4A Playoffs where they lost to the Bastrop Rams.

“My thoughts on last season was that I could’ve been a better player and leader on the team,” Ardoin said. “I take fault for the loss in the playoffs. I should have played better. It was a learning experience playing in 4A, but we were probably big headed and that’s why we couldn’t reach our full potential, but this year, it is going to be a show.”

In speaking of this season, Ardoin feels that this could be his best season despite all of the different changes the team has had to make during the pandemic.

“I believe I can see the field more and I got a stronger arm to make more throws down the field,” Ardoin said. “I’m also more vocal on and off the field. I am trying to improve as a leadership along with my arm strength and work my progressions quicker.”

The Eunice veteran quarterback has also taken away from watching guys like Lamar Jackson (Louisville/Baltimore Ravens), Russell Wilson (NC State/Wisconsin/Seattle Seahawks), Kyler Murray (Texas A&M/Oklahoma/Arizona Cardinals), Peyton Manning (Newman/Tennessee/Indianapolis Colts/Denver Broncos), and Tom Brady (Michigan/New England Patriots/Tampa Bay Buccaneers). He has also made sure to take in everything from his new head coach Andre Vige, who was a former quarterback at Eunice.

“First, playing for one of the GOATs in high school football in Coach Trosclair is a great experience,” Ardoin said. “He’s the coach that is going to push you to your limits because he knows the type of player you can be and at the same time, is a great mentor. With Coach Vige taking over, there is no change because he has been with Coach Trosclair for so long. Coach Vige has always told us to never get comfortable and always try to improve your game. He has already done a great job making us better athletes.”

As far as athletes playing the quarterback position in the Lafayette area, Ardoin is one of the best in the state for the 2021 class. At only 5-8, 150 pounds, he makes up for it with his athleticism, toughness, and impressive 4.5/40 speed. Despite meeting three qualifications that it takes to advance to play college football, Ardoin has yet to receive a college scholarship.

“Colleges should take a chance on me because I’m a team player,” Ardoin said. “I can make plays when they are needed. I’m a dependable player that can do whatever it is necessary for the team.”

Players like Ardoin are hoping that they get the chance to prove themselves with one more year left to play. Even though it might not be at the quarterback position in college because of his ability as an athlete, what Simeon Ardoin has proved is his ability to make plays in the biggest games while showing ownership and taking responsibility as a leader of the football team. The Eunice veteran quarterback has also showed that he is ready to take on any challenge especially in the crazy hectic year of 2020.

Click the link below to check out Simeon Ardoin’s junior highlights: