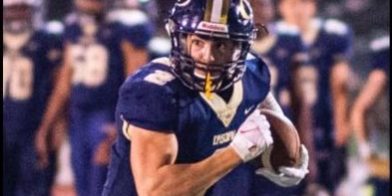 Heading into the season, the Episcopal Knights had to replace 16 seniors including an offensive backfield that all have signed to play college sports at the next level with QB Dylan Mehrotra (UAB), RB Ryan Armwood (Southeastern), and RB Oliver Jack, who is running track at UL. There was a lot of uncertainty how the offensive backfield will look heading into the season, but what was unquestionable was that the Knights’ offense was going to run through its best player Thomas D’Armond. At 6-0, 190 pounds with 4.5/40 speed, D’Armond has been a constant staple over the years in the Knights offense as one of the best players in their district for the last three years, but now, he has exploded onto the scene as truly one of the best players in the Baton Rouge area.

“Breaking through tackles is just the mentality that I have,” D’Armond said. “I am not going to let the first guy bring me down. A lot of that comes back to the weight room and the work that we put in over the summer. The quickness is something that I work on a lot to when it comes to lateral quickness drills that we have done over the summer.”

Not only does he have quick 4.5/40 speed, but he also can squat 500 pounds in the weight room showing his power as well. In fact, that is what makes this dynamic runner stick out even more. His hard work with Episcopal and Ochsner Performance Training over the summer has not only made him stronger, but because of it, he is also even faster than what he was before.

“I have really improved in both my speed and strength,” D’Armond said. “I have always been a pretty strong kid, but I feel that I may have made a big jump from my junior year to my senior year with my speed and quickness.”

That jump from junior year to senior year would be pretty important heading into the 2021 season. The versatile playmaker has made plays over his career at wide receiver, but this year, had to make the full time transition to fullback, which is still taking some adjusting to.

“I think the biggest thing is still trying to improve on my vision,” D’Armond said. “Last year, I played a lot of wingback just because we had Oliver back there. I also played in the slot a lot, and that is mainly where I thrive making guys miss in the open field. Understanding where my line is blocking and when to cut is what I am continuing to work on as fullback is such a new position for me.”

He and so many teammates had to step up at other positions in order to be successful, and fortunately, they have as the Knights are currently 3-0.

“It was a big adjustment for us,” D’Armond said. “Ethan Carmouche has definitely stepped up his play as he is going both ways as well. He and our quarterback Lewis Ward has stepped up and battled through adversity because he didn’t get a lot of playing time last year just because Dylan was a heck of a ball player for us. I am proud of Lewis as he has truly embraced taking on the starting quarterback role for us and has already proven to be a leader even though he is only a junior.”

With D’Armond, Carmouche, and Ward all filling in the vacant spots left by the three seniors, there has not been any drop off at all in the production as the two running backs have always had great chemistry together.

“We have been best friends since elementary school and it definitely helps that they are beside you if you make a mistake or a bad play,” D’Armond said. “He really does help you get encouragement.”

What is also encouraging is the promising recruiting process that D’Armond is going through. The do it all athlete has been getting some college offers and attention from a variety of schools.

“I have one offer from a Division I FCS school, and that is Samford,” D’Armond said. “The other offer I currently have is from Louisiana College. I have a lot of other schools that have been talking to me as well like Houston, UAB, Rutgers, SMU, San Diego State, McNeese State, and a little bit from Louisiana Tech. I have also been trying to get in contact with other coaches sending them my film.”

The Samford connection makes a lot of sense as D’Armond’s older brother William D’Armond played football for the Bulldogs as well.

“My brother is my best friend, and we have an amazing relationship to start with,” D’Armond said. “It’s a bond that cannot be broken, and I have always looked to him as a role model,” D’Armond said. “Seeing him play at Samford was a really cool thing for me. I don’t say it was the moment that made me want to play college football, but it was the moment seeing him play that confirmed it for me. It was cool seeing that, and my sister also goes over there. She is a senior currently and she loves it. I have gotten to know the head coach Chris Hatcher for a while now. I went to their camp my freshman year and again, my senior year over the summer. That is when I got the offer. I also got to know the offensive coordinator Mitch Stewart and Mack Helms, who is the recruiter for Louisiana and coaches the offensive line. I love their staff, and they are a big passing offense. They threw 75 passes in their last game which I went to on a game day experience against ETSU. I love the campus and the atmosphere is awesome.”

Although D’Armond is in a running offense at Episcopal, he is being recruited to play as a slot receiver for the next level.

“They like a lot of what I can do in the slot,” D’Armond said. “I may not be the fastest guy in the world, but I take a lot of pride in my route running. I can get off the line well and can make some great double moves. However, I can play anywhere as long as I can get on the field. Talking with Coach Mitch, he was explaining to me where I would fit in their offense. They call it the H position, which is in the slot, but they will also line me in the backfield when the offense goes to two backs and will get the ball to me on some quick routes.”

Despite the connection to Samford, the recruiting process is still wide open for the Episcopal FB/LB as there are also other factors to consider.

“One of the biggest things for me is my relationship with the coaches because I want the place I attend to be a second home,” D’Armond said. “I think it is very comforting that you can talk to your coaches about anything and not just football. I also like a good atmosphere and getting pumped up for the games. It’s fun playing for a large amount of people, and then, the education is what I am looking for. Football doesn’t last forever. Education always comes first is what my dad always preaches and getting a degree is my number one priority.”

What is D’Armond’s current number one priority is helping win games for the Episcopal Knights. His goals for the rest of the season are to rush for over 1,000 yards in which he is currently on pace to having and also lead the Knights to an undefeated state championship, which would be a first in the program’s history. While those goals are still in reach, D’Armond and his teammates helped their head coach Travis Bourgeois accomplish a milestone of his own after last week’s 41-14 victory over Pope John Paul.

“It was an awesome moment for Coach to get his 150th win,” D’Armond said. “I didn’t even though he was approaching 150 until one of our offensive linemen Carson Duval texted all of us the night before the game saying that we need to get this victory for Coach’s 150th win so because of that, we wanted to get this win even more. Me, Ethan, Dryden Duggins, and Val Rangelov dumped all the ice water on Coach after the game, and it was a really cool experience.”

With number 2 carrying the football, this Knights football team will have a chance to make plenty of more great memories while perhaps making even more history this season.

Click the link below to check out Thomas D’Armond’s junior highlights: