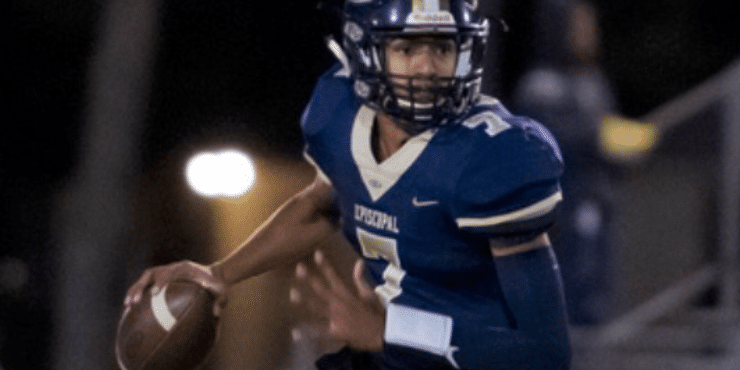 It is always great for a player to have a positive mindset and be committed 100 percent to the team, but it is even better to have that player as your starting quarterback. Episcopal High School’s starting quarterback Dylan Mehrotra is one of the rising prospects in the Baton Rouge area, and he has one goal in sight for the Knights.

“Our number one goal is to win a state title,” Mehrotra said. “We have ten returning on offense and some major ball players on defense. We have worked hard and are ready to go!”

At 6-3, 195 pounds with great athleticism, Mehrotra has started to receive some college attention including receiving offers from Bucknell, Fordham, Lafayette College, Prairie View Academy, Morehead State, and UAB. To show how focus he is on the Knights, he has decided to commit to the Blazers of UAB before the start of his senior season.

“UAB was the right school because it checked off so many boxes for me,” Mehrotra said. “It’s a great city, has a large student enrollment, and offers areas of study that interest me. The UAB coaching staff made me feel extremely comfortable and assured if I work hard, I have a chance to compete for the starting job. UAB is doing some amazing things with their football program! They were Conference USA champs in 2018 and won the West Division in 2019. They are building a new 45,000 seat stadium.”

For Mehrotra, his emergence as a quarterback could present more opportunities after his senior season, but fortunately for Blazers fans, the Episcopal senior quarterback is not thinking about going anywhere else.

“I am 100% committed to being a Blazer,” Mehrotra said. “I love everything about whats going on there!”

Not only does the three star quarterback have future plans at UAB in football, but also knows what he wants to do after his football playing days are over as well.

“I hope to keep my career going as long as I can,” Mehrotra said. “I plan to major in Business at UAB and I know that degree can help me for my future!”

Although Mehrotra has his goals for the future, he is also focused on this upcoming season as well. After leading the Knights to a 9-3 overall record while throwing for 1,271 yards and 21 touchdowns in a running offense, the expectations are through the roof for 2020.

“I would give us an A,” Mehrotra said. “I feel like we competed every time we stepped on the field last year. As for me, I would give myself a B. I had a decent year, but hope to improve more this season!”

Mehrotra hopes to improve more this season by continuing to work on his strengths and working on his weaknesses.

“I feel like I have a good arm,” Mehrotra said. “I can read defenses, I’m competitive, and I feel like I can extend plays. I think I need to work on getting stronger, faster, and smarter. The college level is going to be tough, so I need to make sure I’m ready for it.”

The UAB commit has also watched other NFL quarterbacks to help him with his game even more.

“One of my favorite quarterbacks in football is Deshaun Watson (Clemson/Houston Texans),” Mehrotra said. “He’s got unbelievable arm talent and can also make you miss with his legs.”

In speaking of making plays both running and passing, Mehrotra has the ability to do both, but if he had to choose, he would rather show off his arm than his wheels.

“Definitely throwing,” Mehrotra said. “I love seeing the look on my teammates face after they catch a touchdown pass. It’s rewarding as a quarterback to see all your teammates get involved!”

In addition to football, Mehrotra also is a track star too for the Episcopal track and field team.

Like a lot of athletes, this Episcopal two sport athlete has inherited a lot of abilities from his family.

“My mom was a great high jumper back in India and my dad was a stud baseball player and tennis player for Baton Rough High back in the day,” Mehrotra said.

With also a 3.4 GPA in the classroom, Mehrotra is the epitome of being a strong student athlete. Because of his willingness to become the best he can be both on and off the field, he is committed to do whatever it takes to excel whatever means necessary. What better way to show it is to do the hard work when nobody is watching, especially during a Coronavirus pandemic.

“I’ve had the same mindset throughout this pandemic, which is to work hard,” Mehrotra said. “I think the biggest adjustment is not being in the pads right now. Colleges should take a chance on me because I’m competitive and will do what ever it takes to win.”

Click the link below to check out Dylan Mehrotra’s junior highlights: