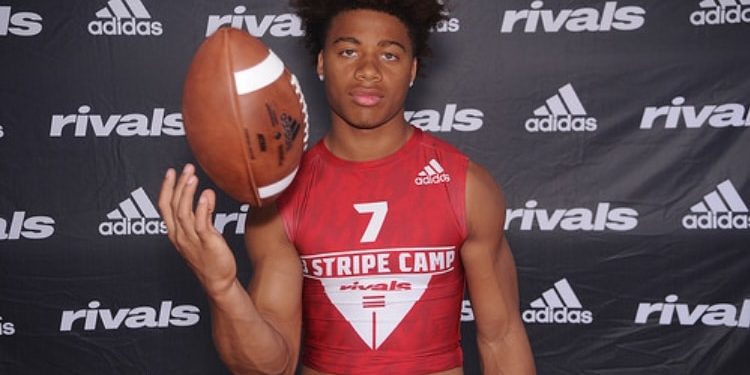 As a member of a perennial program at The Dunham School in Baton Rouge, Derek Stingley Jr. is not a stranger to experiencing success and being amongst some of the best talent the state has to offer. Over the past three seasons, Dunham has lost only six football games, which includes the postseason as well. Dunham is a school that is among the elites in the city of Baton Rouge in terms of athletic success. Stingley Jr. was the main highlight to a very good secondary unit for the Tigers’ defensive backfield. As a six foot, 193 pound cornerback who runs a 4.30 in the 40-yard dash, it is no surprise why Stingley Jr. is one of the most coveted players in the class of 2019.  Stingley Jr. has been playing football for as long as he could remember. As a young kid, he fell in love with the game and knew he wanted to be the best. Ever since, he has worked extremely hard to groom himself into the player he is today. He modeled his game after former LSU standout and Arizona Cardinal cornerback Patrick Peterson.

“He’s the total package of what a defensive back should be,” Stingley Jr. said.

Throughout his time playing football, he has played at every skill position, which includes quarterback and even kicker. On a multitude of occasions, he has displayed his elite versatility and ability to make game-changing plays at different positions. A game that stands out to Stingley Jr. was his performance against Pope John Paul II last year in the first round of the playoffs.

However, Stingley Jr. admits he enjoys playing cornerback more than any other position.

“Cornerback was the position my dad mainly worked me at when I first started playing,” Stingley Jr. said.

Stingley Jr’s father, Derek Stingley, and his grandfather, Darryl Stingley, both played in the NFL and his father also spent time playing Arena Football. Stingley Jr. also ran track and a solid basketball player. Basketball was a sport Stingley Jr. found himself to be very good at and had the privilege to play on superb teams.

“I played on some good basketball teams with some great teammates,” Stingley Jr. said. “We were tough to beat. I wanted to focus more on football and track so I gave up basketball.”

Stingley Jr. says he knew he would have a better chance of playing football on the next level instead of basketball and that factored into his decision of letting go of basketball. There were a plethora of significant games Stingley Jr. has played in, but he does not make any game bigger than another. Approaching every competition with the “one game at a time” attitude is what helps sustain his even-kill mentality.

“I don’t put one game bigger than another,” Stingley Jr. said. “I respect all of my opponents. I prepare myself to win every game I’m a part of.”

With this approach and his consistent elite play on the field, Stingley Jr. inherited the role of being the undeniable leader of his team. Being a leader not only forced him to raise his level of play even more, but gave him a new perspective with his peers looking up to him.

“I embrace it,” Stingley Jr. said. “I know now that I’m one of the leaders of the team for this year. I have no problem having players look up to me. I mainly lead with my play on the field. If I have to be vocal, I will, but I prefer to lead by making positive plays for my team.”

Throughout his career, he has collected numerous honors and awards from his standout performances. Some of his accolades included First Team All-State, Defensive Player of the Year, and being named an U.S. Army All-American. Louisiana Football Magazine’s recruit expert Lee Brecheen truly believes that there will be more accolades coming his way based on his pure athletic ability.

“Two years ago in 2015, I went to a Dunham’s spring practice to see a young quarterback in Mike Williams (Texas signee) play and left thinking a kid named Derek Stingley Jr. and also young player named Makiya Tongue, who is currently at U-High, would be special,” Brecheen said. “One thing you see with Stingley you do not see with most high school corner backs is his ability to jam receivers and play man coverage. I saw that almost three years ago at practice and he had it then. He has a chance to be a special player.”

Stingley Jr. gives the credit to his parents for his success and plans to continue working hard and developing into an even greater player. While various Power 5 colleges are salivating at potentially receiving a commitment from Stingley Jr., he will continue to make visits and weigh all of his options before making a decision.