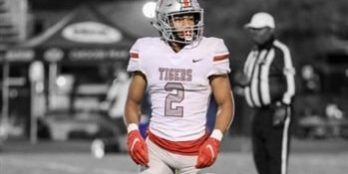 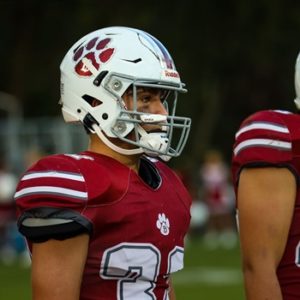 While football coverage is dominated by singular stars and powerhouse players, it takes a full team effort to become a good football team. No where else is this more exemplified than in Dunham High School seniors Hayden Hand, Jordan Dupre, and Lawrence Watts. Hand, the 6’2, 190 pound quarterback, said that he’s incredibly happy with how the team has performed despite the slow start.

Success runs through the quarterback, and Hand shows this off well highlighting his good decision making and clutch factor along with his ability to run as the biggest strengths of his game. Hayden said he models his game after National Championship winner and current Cincinnati Bengals QB Joe Burrow, citing Burrow’s playmaking ability and willingness to run when needed as attributes he looks up to. Hand is currently being recruited by several schools, including a scholarship offer from Louisiana College. He has also attended camps at Belhaven, Arkansas-Monticello, and Southeastern Louisiana. While Hayden said he is looking to improve on his deep ball, his undeniable arm talent and speed makes him a threat for any defense.

While success may run through the quarterback, a wide Receiver and lockdown cornerback is another key pillar of a success. In this, the Dunham Tigers have Jordan Dupre. The 5’10, 180 pound Dupre plays the game with heart and swagger, something very important for a player on both sides of the ball. Dupre credits his Football IQ and speed for his play running a blistering 4.46/40. His speed kills on both sides of the ball. Jordan said that he models his game after a few of his training partners, Virgina Wide Receiver Dontayvion Wicks, and Atlanta Falcons Wide Receiver and former LSU Tiger Russell Gage. Dupre has been recruited by several schools, including offers from New Mexico and Memphis. His speed and knowledge on the field makes him a dangerous target for Hayden Hand, and leaves Wide Receivers on an island on the defensive side of the ball.

Yet another Iron Man for the Tigers, Lawrence Watts spends most of his time playing safety, but also spends time lining up as Hand’s backfield mate at running back. He is also another example of speed killing. Running a 4.5/40, Watts had 2 interception returns for touchdowns to go along with 60 tackles and another interception. Lawrence has expressed interest in joining the Air Force Academy hoping to play football and major in engineering. He has also identified Arkansas, Baylor, and Louisiana Tech as schools that interest him. No matter where he goes, his speed and physicality makes him a dangerous player.

Dunham looks to continue momentum after a 43-14 win last Friday against Northeast. “The ceiling is the limit for us,” Dupre said. “We feel like we can make a deep run in the State and win the whole thing.”

Click the link below to check out Lawrence Watts’ midseason highlights:

Click the link below to check out Hayden Hand’s midseason highlights:

Click the link below to check out Jordan Dupre’s junior highlights: