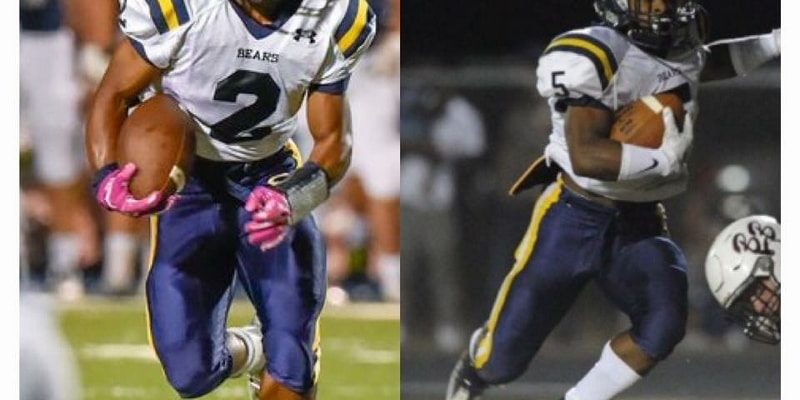 When you look at a great offense, there is always something that an offense has regardless if it runs the spread or the triple option. They have a playmaker that they can give the football to in open space and make big time plays. Those guys are called “X-factors”, and they can change an entire game in just one play. Teams would be lucky to have one X-Factor playmaker on their team. Sometimes, they are not the biggest guys on the football field. Look at Darren Sproles (former Kansas State, San Diego Chargers, New Orleans Saints, and current Philadelphia Eagles running back), Trindon Holliday (former kickoff returner for LSU, Denver Broncos, and Houston Texans), Jakeem Grant (former Texas Tech wide receiver and current punt returner for the Miami Dolphins), etc. are all guys that were or currently in the NFL and were the most explosive players on the football field even thought they were not taller than 5’6.  Teams get lucky getting one player like that, but the Carencro Bears just happen to have not one but two players like that.

They are twins to be exact and their names are Kendarius and Mondarius Poullard. Both guys are 5’4 at just over 150 pounds, but they play much bigger than their size indicates. They are guys that can hurt you in a bunch of ways. They both run the football inside and outside as well as catch the ball out of the backfield. They are even lethal on special teams and on defense whenever they get the chance to get the football in their hands. Louisiana Football Magazine Editor and T.V. Host Lee Brecheen believes that even though they are undersized, they have a chance to be very good football players at the next level.

Kendarius and Mondarius are two of the quickest football players in the state,” Brecheen said. “They are two identical twins who can score at any moment and are a package deal. Both guys can be really good players at the D-III level.”

Both guys have been close together since they were born and want to play with each other for the years to come. If somebody offered one of them, they would remind the scouts and college coaches that they are indeed a package deal.

“I would tell them that we are a package deal,” Mondarius Poullard. “What he can provide, I can provide as well. If I get hurt, he can get in the game so we complement each other pretty well.”

Their football careers actually started not by playing football on the playground like most other kids do but another reason made them try out to play football.

“Playing video games and watching T.V.,” Kendarius Poullard said. “We were both thinking that we can do it and so, we tried it out.”

The Poullard twins are thought of to be exactly the same when they are on the field. They are exactly the same size and both look the same, but there are some differences between the two that only they can realize.

“My brother has a better running form than me so he is about three seconds faster than me,” Kendarius Pollard said.

“I am more of a wide receiver and he is more like a running back,” Mondarius Pollard said.

Not only, they have some differences in their running style and play different positions but both brothers have different football players that they model their game after. Being the size that they are, people would think that they watch a guy like Sproles or Holliday play, but it turns out that it is not the case for either one. Actually, one brother has two players in mind that he likes to model his game and they are both new and upcoming stars, but the other brother watches a running back that is a little bit more old school.

“I like to watch Shaun Alexander (former Alabama and Seattle Seahawks running back) because he was really fast and he ran hard,” Kendarius Poullard.

The Poullard twins aren’t completely the same as they have different strengths and weaknesses and different running styles that they like. They even want to go to two different colleges as Kendarius wants to go to Texas Tech while Mondarius wants to take his talents to TCU. Even though they have some differences, they both realize that they are very similar players and both pose similar threats in the run game, the pass game, and on special teams.

“My brother looks like me and can do the same things that I can do,” Kendarius Poullard said.

Not a lot of people can say that they have played with their own brothers even in high school. Of course, the Manning brothers as well as Tikki and Ronde Barber are the biggest examples of that happening in the NFL. Even though they share the spotlight and not one sticks out more than the other, they love that and they love playing with each other. Brothers get competitive and there is even a bet that goes on between the two on who has the better game statistically.

“We would always have a bet that whoever has the less yards has to do the other person’s chores for the weekend,” Kendarius Poullard said.

It is great to have a brother who makes you better everyday through practice and all the hard work that the two pay off helps them enjoy it during game time. In their pregame routine, they like to show off for their fans and teammates a little bit.

“We both do backflips during our pregame routine,” Mondarius Poullard said.

As brothers, it is very unique for them to watch each other on the field and basically see themself playing.  Mondarius Poullard can’t help enjoy seeing his brother play.

Even though they are undersized, both don’t think that it is a weakness for them, but it actually makes them better football players.

“Everybody underestimates us, but we can prove that we can play with the big boys,” Kendarius Poullard said.

They can definitely do that. Carencro Head Football Coach Roland Eveland must enjoy the number of options that he can give the football to. The Bears finished 8-2 this year and third place in a very tough district that also had teams like St. Thomas More (Lafayette) and Teurlings Catholic that finished ahead of them this year, but the Bears are definitely a threat to pose a playoff run. This week, the ninth ranked Bears start their journey to the playoffs against Salmen High School. Both Kendarius and Mondarius have the same individual goals this season, and both would love nothing more than to end their senior season with a state championship in the Superdome. Defenses will definitely have their hands full when they deal with not one X-Factor but two, which makes it Double the Trouble for any defense that plays the Bears this postseason!