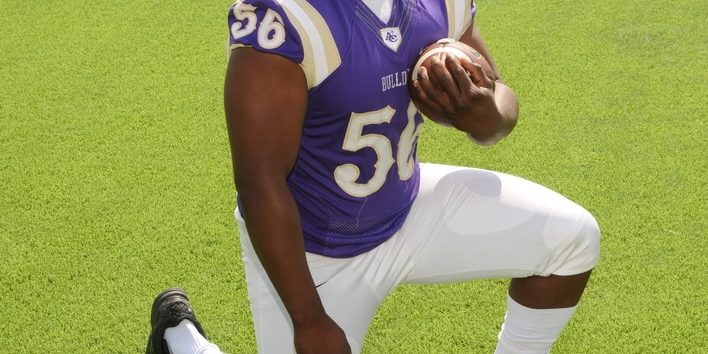 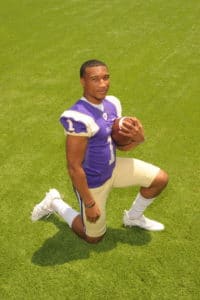 What a season it was for Coach Drey Trosclair and the Ascension Catholic Bulldogs in 2017. The team finished with a 11-3 overall record and a trip to the Division IV state championship game. Even though the Bulldogs did lose that game to the Lafayette Christian Academy Knights, last year’s final result has not affected the team so far in 2018 as the team has an undefeated 6-0 record. Senior defensive end Dillion Davis is one of the many leaders on this football team. He said that the coaching staff and team has done a great job of putting away that loss in the Super Dome behind them.

“After losing the way we did in the Dome, we came into this season looking for revenge,” Davis said. “We looked to put last season behind us and look to chase the championship again. We know every week that we are moving closer to our goal, which is winning a state championship.”

What really helps the Bulldogs is playing in arguably the most difficult district in Class 1A football with other football programs such as Kentwood High School and Southern Lab High School. In speaking of Southern Lab, that is the next opponent for the Bulldogs. Both the Kittens and Bulldogs are two of the favorites not only in the district but in the select Division IV bracket along with Lafayette Christian Academy. This regular season matchup may decide who wins District this year, but there is a good chance that this will not be the only time these two teams play each other. Ascension Catholic Head Coach Drey Trosclair knows how important tonight’s matchup is.

“It is a huge matchup,” Trosclair said. “Right now, it is #1 vs. #2 in the power rankings. The winner of this game is in the driver seat for winning the district along with Kentwood. It should be a great atmosphere in Mumford Stadium.”

Offensively, having two LSU commits does help the Southern Lab Kittens with offensive guard Kardell Thomas and running back Tyrion Davis, but having a defensive end like Dillion Davis makes things a little bit easier for the Bulldogs in trying to stop the Kittens’ bread and butter.

“Dillion Davis is very disruptive for use defensively,” Trosclair said. “He can come off the edge and does a really good job of rushing the passer.” 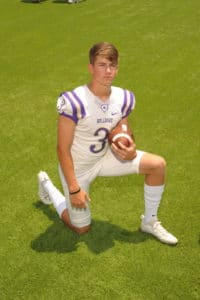 At 6-2, 276 pounds, Davis has the size and speed to really be a factor in tonight’s game. He has shown to take over in big games like this over his high school career as the Parish’s defensive MVP, All-District, and All-Parish selection. Davis is the biggest senior recruit for the Bulldogs after receiving offers from ULL, Tulane, Texas State, Arkansas State, Nicholls State, Southern, and Southeastern. Still, even with all of the recognition including being on the cover of our South edition preview magazine, it does not prevent Davis from continuing to improve his game whether it is working on his skills or watching film on NFL players.

“I am working on my foot speed as well as ways on defeating double teams,” Davis said. “I really like watching Cameron Jordan (Cal/New Orleans Saints) and Ed Oliver (Houston). Both players really play with their hands and have a passion for getting to the passer as well as stopping the run.”

In order for the Bulldogs to have success, Dillion Davis must do well in both of those areas. In speaking of doing well, the Bulldogs also have a bread and butter running game led by the exciting duo of senior running back Jamar Barber (5-7, 170) and junior running back Jai Williams, who have both rushed for 1,000 yards last season and are looking to repeat that feat this season. With all the success Barber has done on the football field, it seems that the colleges have not paid attention. 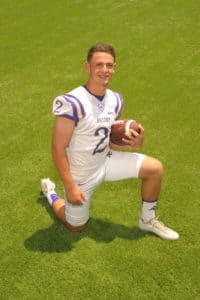 Considering how dominant the running game has been, it is a surprise that the All-District running back has received rarely any interest from colleges. However, the offensive line has been the same way and brings the same hard hat attitude of just doing your job even though their play may not be recognized. The leader for the Bulldogs upfront offensively is senior center Jacob Matirne (6-2, 260).

“I just try to do my best for my team in order to get us to that next level,” Matirne said.

Matirne’s attitude, high football I.Q., and leadership has been another key component to what the Bulldogs want to do, which is control the line of scrimmage. However, the team can throw the football when they need to. Senior Bulldogs Quarterback John Mire has a big athletic target in Michael “Tre” Medine (6-2, 180).

“Tre is a big receiver for us on the outside,” Trosclair said. “He is a guy that we are going to try and throw to in the red zone. He is our guy for us and has really played well.”

Another senior that Trosclair has high praise for is senior ATH Rodney Blanchard (5-10, 165).

“Rodney has played multiple positions for us,” Trosclair said. “He moved from slot receiver and is now playing some quarterback for us. He is so versatile for us as he is also our kicker and punter as well. He is an all around great athlete that does a lot of different things in order to help us win.”

The Bulldogs also are waiting to get senior WR/FS Mason Zeringue (5-9, 175) back in action after he has suffered a knee injury for most of the season. When he is in the lineup, it will be a huge plus for the Bulldogs as he is a two time All-District selection that plays fast and not afraid to be physical at the point of attack. Having players like Zeringue and Barber at 100% will pay dividends for this team that is already talented and has senior leaders on this team. Senior Ascension Catholic players all reflected on how much this game sets up the rest of the season.

“This game is huge for us,” Zeringue said. “It can be used as sort of a measuring stick to see exactly where we are at as a team. In order for us to come out with a victory, we need to play Ascension Catholic football, which is play like the hardest, smartest, and most intense people on the field. Also, we need to execute our game plan extremely well in order to come out on top over an extremely talented Southern Lab team.”

“We are ready for the game,” Matirne said. “I feel we have a really good game plan and now, we just have to go out and execute it.”

Regardless of the result in the game, it does not change the goals ahead for the Bulldogs.