Destrehan Star Running Back John Emery Jr. Strives to Cement his Name as the Next Great Wildcat 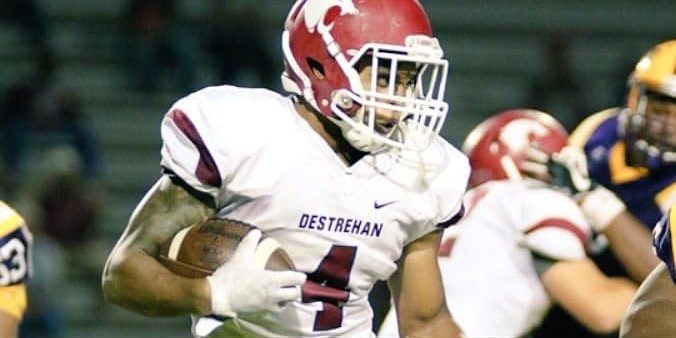 Destrehan Star Running Back John Emery Jr. Strives to Cement his Name as the Next Great Wildcat

Destrehan High School has always been know for their great football talent. When fans reflect on the great Louisiana talent to ever put on the Garnet and Gray, they think about well known names such as Ed Reed (Miami/Baltimore Ravens/Houston Texans), Rondell Mealey (LSU/Green Bay Packer), Damaris Johnson (Tulsa/NFL) and plenty of others including some familiar names over the last decade like the Jefferson brothers, which include Jordan (LSU/Tampa Bay Buccaneers), Rickey (LSU/New Orleans Saints), and now Justin (LSU). Now, there is another current player that would like to add himself to the list as a player who could one day take his talents to the college and NFL level. His name is John Emery Jr. Emery is regarded as one of the best running backs not only in the state, but in the entire country. There are a bunch of big name DI teams that are all recruiting Emery to be their number one featured back and for good reason as the four star running back has a lot of skills to his arsenal.

“I have great vision,” Emery said. “Vision is the biggest key in my opinion. Some running backs don’t have it and is something that you can’t really teach. In my opinion, you either have it or you don’t. Having the vision to go along with my speed is something that I need especially for my size. I am also have a lot of power when I do run the football. Those are really my biggest strengths.”

Emery used all of his skills last season every time he touched the football. On only 115 carries, Emery averaged over seven yards per carry with 864 rushing yards and seven touchdowns. Emery’s skill set has attracted nationwide attention, but still, he feels that he has a lot left to prove and that the best is yet to come of what he can actually do.

“I still have a lot to improve on,” Emery said. “In fact, I am still trying to recover from injuries last season. I am still working out in the spring, but I am really working on running lower with my running style.”

Louisiana Football Magazine’s recruit expert Lee Brecheen got the chance to see the 5-10, 205 lb. running back  in action a couple of times over his prep career and was very impressed by his raw ability from the start.

“John Emery Jr. has great balance for a kid over 200 pounds,” Brecheen said. “Emery has great vision and is very hard to tackle with your arms. He has power and can cut on a dime in the open field. He has great feet, hips, and can catch the football really well. He is a Leonard Fournette (St. Augustine/LSU/Jacksonville Jaguars) type of runner with not as much power. I saw him play in person as a sophomore against Woodlawn High School in Baton Rouge. You could tell then he would be different and special by his senior year.”

“The only running back that I watch to gain technique and to improve on my game is Le’Veon Bell (Michigan State/Pittsburgh Steelers),” Emery said. “I have watched a lot of running backs and there were plenty of good ones to come out of Louisiana, but as far as studying on a player, it is Le’Veon Bell.”

Both players are similar in the fact that they both have unique vision and burst when they run the football. They are special players and that is why many colleges are wanting the local product from Destrehan High School. For him, the recruiting process is a very enjoyable experience.

“I have been trying to go on visits and take on the environment for each school,” Emery said. “Seeing how everybody else lives their lifestyle because right here in Louisiana, it is different. That is what I like about it because you get to meet new people and not just ordinary people, but big time former players and coaches. The only negative about this whole process would be my phone because it is constantly blowing up.”

Jokingly aside, Emery is taking the process very seriously. He has already narrowed down the list to his top eight schools. Going to each of these schools and visiting them has influenced his decision to narrow down to the following schools such as LSU, Florida, Georgia, Tennessee, Michigan, USC, Auburn, and Mississippi State. According to Emery, these eight schools have met the star running back’s criteria.

“When I picked the top eight, I did it because I really liked those schools,” he said. “All of those schools have a lot of talent and have produced running backs especially USC. They had Joe McKnight (John Curtis/USC/New York Jets), who went there as well as a lot of other guys that starred there. When I visited those schools, the facilities were great, the environment was great, and the way they do things is great. I want to be at a program where I would be a great fit in the next three to four years.”

With all of the national attention on his mind, Emery just wants to put all his focus right now into the Wildcats’ season. After a 10-3 season last year, in which the Wildcats lost to the Barbe Buccaneers in the second round of the playoffs, Emery is determined to leave his mark with a strong senior season hopefully to lead the Wildcats to another Class 5A state championship.

“I am still going to grind and do whatever it takes to help my team out this year,” Emery said.

With this nationwide spotlight on Destrehan running back John Emery Jr., it can be very easy to be carried away with all the attention and notoriety, but the most special quality about him despite the fact that he is a talented ball carrier is that he is grounded and humble about where he is at. He said that without the guidance of God, his family, and friends, he would not be in the position that he is in now. This year’s 2019 class in the state of Louisiana is as strong as it gets especially at the running back position, but Emery believes it is his ability to overcome adversity and his drive to get better will set him over the top.

“When I came up, I was actually the second string back when I was coming up as a sophomore at Destrehan,” Emery said. “I was behind a senior and in the first two games of that season, I only had three carries. I was upset about it to start, but in the fourth game of that season, I made a play and after that play, everything just seemed to change. I guess coming from a school like Destrehan, it has really made me appreciate my talent and made me want to get better. Just being able to play for Destrehan is a blessing. Players like Ed Reed, Justin Jefferson, and Michael Young (Notre Dame) have gone through the program and I want to be like them.”

Before John Emery Jr. makes his mark known at the collegiate level and even at the NFL level, he wants to make sure that he leaves his own mark at Destrehan High School. With the talent and work ethic that he possesses, it should be pretty exciting to watch #4 run the football his senior season.