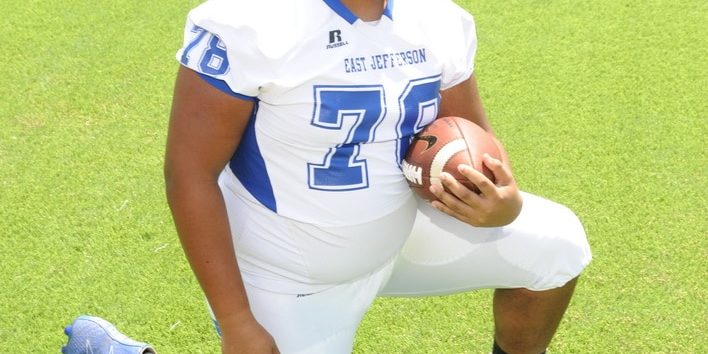 The East Jefferson Warriors will have to play in a daunting schedule, which features plenty of New Orleans powerhouse teams. Fortunately for the team, they have a lot of talent all across their squad under the leadership of Head Coach Frank Allelo. According to Louisiana Football Magazine’s recruiting guru Lee Brecheen, the Warriors do not have a lack of skill talent.

“Cornelius Beasley will play everywhere for the team,” Brecheen added. “Beasley can play some quarterback, running back, defensive back, and even on special teams. He is a really good athlete even though he might not be the biggest at 5-9, 160 pounds, but is fast and a playmaker with three years of experience for the program. At the D-II level, he will be a steal at the college level.”

There are also other weapons on the offensive side of the football surrounding the senior dual threat playmaker.

East Jefferson senior WR Kyren Bush will use his size to his advantage especially in the red zone. (Photo provided by Kyren Bush)

“Kyren Bush is a 6-4, 180 pound wide receiver,” Brecheen said. “Williams is tall and lean with a lot of upside at the college level. He needs to have a big year in order to move up in recruiting ranks. He will be a steal at the I-AA level because he can be a tight end at the college level at 6-4, 210 pounds to go along with 4.6/40 speed.”

So far, Bush has not received any offers, but is hoping that this year will change that.

“I am a hard working coachable wide receiver that can really do it all.” Bush said. “I feel that I am a big red zone threat.” 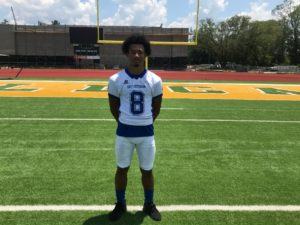 East Jefferson senior FS/SS Kendo Williams is a great athlete and hitter. This is the year for him to have a breakout season. (Property of LAFM)

On the defensive side of the football, Kendo Williams is the experienced player in the secondary.

Even though there is some skill talent, arguably the biggest strength for the Warriors is their offensive and defensive fronts. On the offensive line, the undisputed leader is Dionte Butler, who may not be the most intimidating opposing player, but is a warrior on Friday nights.

“Dionte Butler has really good feet,” Brecheen said. “Butler is not tall, but still athletic to be either D-II or D-III.”

Butler has been very productive over his high school career so far already earning 1st Team All-District honors. For Butler, his biggest strength is always playing with a chip on his shoulder.

“I don’t have any schools looking at me at the moment,” Butler said. “Just because I don’t have the height doesn’t mean I can’t get the job done. With a player like me, you will always get 100% out of me.” 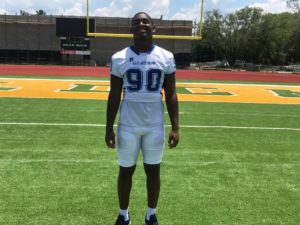 Darrius Harry is the highest recruited senior as of right now with offers from Northwestern State, Southeastern, Nicholls State, McNeese State, and also a DI offer from Colorado State. (Property of LAFM)

While Butler and other teammates are still trying to get offers, senior defensive end Darrius Harry is already getting looked at by plenty of schools.

“Some of the local schools such as Southeastern, Nicholls State, McNeese State, and Northwestern State have offered me as well as Colorado State,” Harry said.

At 6-2, 230 pounds with 4.7/40 speed, there is no question that Harry has raw talent, but his biggest strength is his leadership not only on the football field, but in the student body as he is the class president and is also involved with student council. Brecheen believes that even with the number of colleges that have offered Harry, there could be more to come by season’s end.

“If Darrius Harry reads better and becomes a better pass rusher, he will get bigger offers in the end” Brecheen said.

Besides the players above, there are more players that potentially can step up and have big seasons. 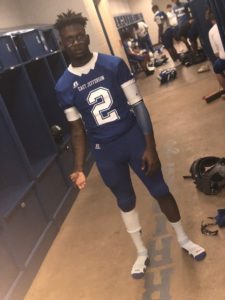 What is amazing about RB Leroy Friloux was that last week’s game was the first time that he has ever played in a football game.

“Last Friday was my first game,” Friloux said. “I had a good game, but for me, I need to run lower and be more explosive. It’s mandatory for me to play good every game.”

The good news is that Friloux is very familiar with the game of football as his cousin Derrick Munson was a standout at Archbishop Rummel High School and is now playing for the Arkansas Razorbacks. However, Friloux is not the only player that is relatively new to the game of football as Keijon Williams did not start playing football until he entered high school. Like Friloux, Williams had a relative that also went on to play college football.

There is a mix of experienced players and raw players, but it seems that these seniors no matter how experienced or inexperienced they are, they are on the same page when it comes to what is expected from the team after coming off a 5-6 season in 2017.

“We were more of an individual team and really made every game about ourselves,” Harry said. “This season, we are focused to be more of a team and work together this season.” 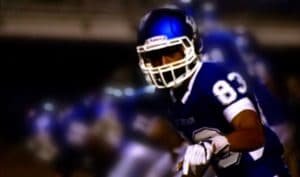 To start off this season, the Warriors suffered a setback losing to the Helen Cox Cougars 39-8.

“There were opportunities for us to beat them,” Butler said. “Out offense showed that we can move the ball, but mistakes and turnovers really killed us.”

This week, the team has arguably an even tougher opponent in defending Class 4A state runner up Lakeshore Titans.

“It’s very important for us to play well ever game,” Bush said. “This is another game for us. We need to practice hard regardless who we play.”

For the Warriors, the team will need to have that mentality when facing a difficult schedule, which includes teams such as Newman, Landry Walker, Chalmette, and John Ehret.