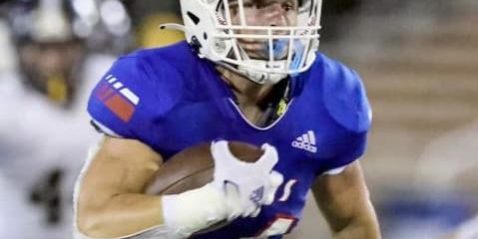 Many players play on both sides of the ball at the High School level, but few play with as much energy and ferocity as Scott Isacks, a senior running back and linebacker for Metairie Park Country Day.

The 6’4” Iron Man for Country Day plays with no fear or lethargy on either side of the ball saying, “I take a lot of pride in playing on both sides of the ball. It’s about pushing through pain and pushing through being tired, putting it in the back of your mind, and keep moving forward.”

Scott likens his playing style as a running back to Derrick Henry of the Tennessee Titans, saying that he’s watched Henry since his freshman year at Alabama, and that he (Isacks) uses his size and physical running style the same way that Henry does. On the defensive side of the ball, Scott compares his game to New Orleans Saints Linebacker Demario Davis, saying his goal is to “Set the tone and play the game violently.” Isacks also stated that he models Davis’ aggression and leadership as key tenets of his own game.

Recruiting is incredibly interesting for players playing on both sides of the ball, and Scott is no exception. Isacks said he is in contact with coaches from Rice University, Tulane, and UL-Lafayette, and has attended several camps for those schools. When asked about how the coaches planned to use him this year, Scott said they were mostly looking at him to play outside linebacker. However, Isacks’ dynamic running ability could place him in a pinch-hitter role if injuries occur.

Scott’s strength extends from the field into the weight room, where he bench presses 275 pounds, power cleans 300, and squats an astonishing 550 pounds, which is over two times his 238 pound body weight. Isacks credits his weightlifting success to his father Leonard, who also played football as an offensive lineman at Tulane and UL-Lafayette saying that his Dad put him in football at the age of five and started Scott in weightlifting soon after. This early commitment and dedication has led Isacks to become a powerhouse both as a rusher and as a defender.

Isacks continues to recover from the broken foot he suffered and played through last season and looks to continue his senior campaign with a win against Arch Manning and Isidore Newman trying to bounce back after an opening week loss to Episcopal.

Click the link below to check out Scott Isacks’ junior highlights: