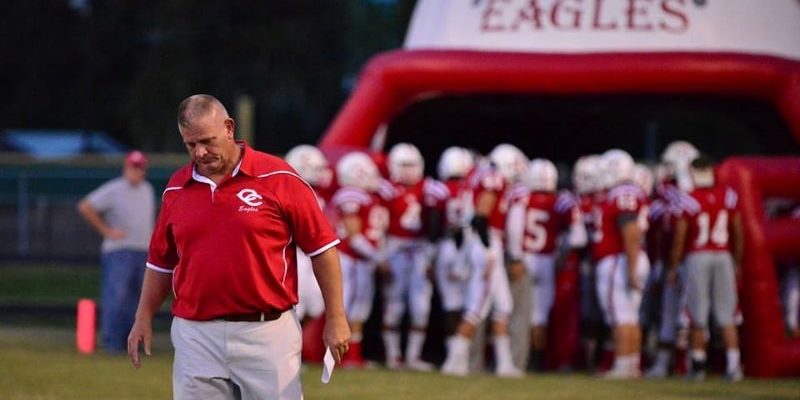 Coach Minton gives his team a pep talk after a football game.

LAFM: Coach, How long have you been coaching Louisiana High School football?

I have been coaching LA high school football for 27 years: head coach for 23 years and 4 years as an assistant.

LAFM: What schools have you coached for?

LAFM: What is your career record?

I was the running back coach for 3 years at Nicholls State. I enjoyed coaching college football because the focus was strictly football. I did not like the recruiting aspect as it kept me away from my family too much. I like coaching high school kids because I can more easily develop them physically and help shape them into future husbands and fathers.

I retired from PHS because I had the number of years required in the state system and was at a point in my career where I thought I needed a change. I always intended to keep coaching. The opportunity at Central Catholic came about and was a perfect situation at this point in my life.

LAFM: Who are some of your most successful players that you have ever coached?

Germaine Jones at Central Catholic was drafted by the New York Jets, from Patterson, Kenny Hilliard played for LSU and is now with the Houston Texans, Trevon Stewart from Patterson was a 4 time All-Conference player at Houston, and Tarence Calais from Patterson played at LA-Tech and is currently a college coach. I have coached over 60 players who have gone on to play college football, and I feel a source of pride for every one of them.

LAFM: You had some great teams at Patterson High School. What was your most favorite team to coach?

I would have to say that my favorite team at PHS was the 2002 team that lost in the state championship game to Redemptorist. It, by far, was not the most talented team I ever coached, but they exemplified the team concept more than any other. They were my best defensive team despite having no player over 200 pounds.

LAFM: Coach, what did Central Catholic do last year?

Central Catholic was 10 and 2 last year, losing in the quarterfinals to Southern Lab.

LAFM: Who are some of the impact returning players returning for this season?

LAFM: What are some key losses that you have lost from last year?

LAFM: What are some teams either in your district or classification that are in your way of reaching your goals?

Our district has Vermillion Catholic and Ascension Episcopal who will both be state contenders. State wide, I expect Southern Lab and Cedar Creek to be very good.

LAFM: Who is somebody on the team that we don’t know now but may know by the end of the season?

I expect junior RB Chris Singleton to have a breakout season.

LAFM: What offensive and defensive system do you run?

We run a spread offense that is based on a power run game. Defensively we are a pressure 3-4 team.

LAFM: What got you into coaching?

My love for the game of football got me interested in becoming a coach. My high school coach and the person I consider my mentor, Laury Dupont, helped me realize that coaching was my calling.

LAFM: Who is the coach (high school,college or pro) that you look up to?

Besides Coach Dupont, there are a couple of coaches that have had a big effect on me: Larry Dautrieve helped me develop my defensive philosophy and Louis Cook is someone whose program I have studied and tried to model. William Minton, my father, taught me discipline and organizational skills from his military background.

LAFM: Who are some people in your life that you are thankful for that put you in this situation today?

I’ve been blessed with a large, blended family, all of whom have been supportive of my career choice. My wife Marie has been my biggest supporter. My son Coby has played for me and is now coaching with me, and my son Cade currently plays for me. I always have a big cheering section of step-children in the stands on Friday nights as well as a grandson as a ball boy.

Of course, competing in the Superdome for state championships in 2002 and 2010 are at the top of my list of football memories. I’ll never forget, however, our 2002 Teurlings game where we overcame a 24 point deficit in the last 6 minutes of the game to advance to the semi-finals.

LAFM: What is something interesting about you that many people don’t know about?

I’m an avid reader and a John Wayne fan.

LAFM: What is the best part about coaching high school football?

The best part about coaching high school football is the Friday night lights and the Saturday mornings in the coaches’ office with the other coaches.

LAFM: What would you want your players to say about you when they are finished playing for you?

I would want my players to say that I helped develop them to their full potential and that I cared about them as much as a person as I did as a player.