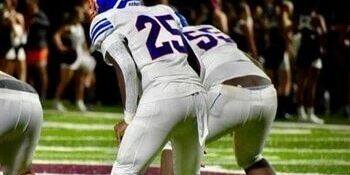 Jayden Butler is a 5’11, 215 pound Class of 2023 tight end from Belaire High School. Jayden says the biggest challenge for him and his team this past year was injuries as they played with no quarterback the entire season. It was up to their running back to step up and play quarterback. They overcame this obstacle by trusting each other and playing as a team. Despite the odds stacked against them, Belaire was still able to defeat Plaquemine for the first time in school history as well as making it to the district championship.

As next season is Jayden’s senior year, he says he is most looking forward to working on his craft, becoming a better player and teammate, and going on a deep playoff run with his team. After high school, Jayden plans to go to college where he will major in either mechanical or electrical engineering. Some colleges he is currently interested in are Jackson State and Southern University, but he is open to any and all opportunities that may come his way.

Click below to check out Jayden Butler’s junior highlights: