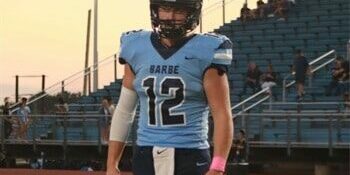 Will McClain is a 6’0, 183 pound quarterback for Barbe High School. Will says the biggest challenge for him and his team this past season was playing with such little experience. The varsity squad for Barbe High School this past season only showcased one returning starter from the previous season. Despite this disadvantage, Will and the rest of the team made sure to take each play and game as a learning experience. With next season being Will’s finally year in high school, he says he most looking forward to getting back on the field with his teammates, showcasing his leadership skills, as well as proving that Barbe is to be taken seriously. After high school, Will has his eyes set on attending either Tulane, Rice, or Louisiana Tech. He plans on majoring in pre law and then continuing on to law school.

Click the link below to check out Will McClain’s junior highlights: