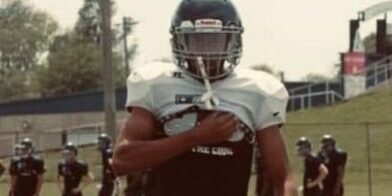 Daxton Chavez is a 6’4, 190 pound junior wide receiver from Airline High School. Daxton says that the biggest challenge for him and his team this past season was dealing with injuries early in the season, which led to shifts in the depth chart and an overall lack of confidence. Airline was able to overcome this setback by gaining confidence and trust with each other and bonding both on and off the field.

With next year being Daxton’s final season in high school, he says he is most looking forward to seeing how his team’s chemistry and demeanor has changed as compared to last season. Airline also brought in a new head coach, and Daxton says bringing in a new face can sometimes be challenging, but he is very excited to work under someone who has the same goal as himself, which is to win games. After this season, Daxton will go on to college where he plans to major in business and minor in marketing. His top 3 colleges at the moment are UConn, Southern Miss, and Texas A&M, but he is still open to any and all opportunities.

Click below to check out Daxton Chavez’s junior highlights: