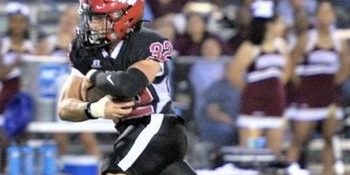 Welsh High School has gone 6-4 this year and are preparing for their first round playoff game vs. South Plaquemines. They are led by QB Cale Navarre and RB Cohen Fontenot. Cale said on the season there were close games that could have gone either way, but now, he feels that “I think now we are ready to win those tight games and are playing our best football of the year heading into round 1 of the playoffs”.

Cale didn’t start out the season at quarterback. He was playing free safety and being a returner. Then, during the LaGrange game, he was put at quarterback. Standing at 5’7 weighing 164, it’s not a big surprise that he compares his game to Arizona Cardinals quarterback Kyler Murray. Part of the reason Cale said was, “running ability. I think I run the ball pretty well and it’s the same style of running that he does”. The best part of his game is his understanding of it. “I’m not the biggest or the most athletic guy on the field, but I understand what Coach wants us to do as an offense and I try my best to go on the field and execute that perfectly every play”. The thing that Cale wants to improve on comes with time. “So I think with time and as I gain experience, every aspect of my game as a quarterback should improve”. The thing that he is looking for most in college is an opportunity to play baseball.

Cohen is a running back who is 5’9, 185 pounds. This season, he has ran for 1,480 and 21 touchdowns. He models his game after Tennessee Titans running back Derrick Henry because he is “an aggressive player who uses his striking rushing game and larger than life stature to achieve his goals on the field”. He enjoys when seeing the team being successful and working hard. The part of his game that he wants to improve on is “I think I need to improve on my vision and balance”. When looking at a college, he says the most important thing is, “a school that wants to allow me to continue my football career and better me in life”. In his free time, he enjoys sports and working out.

With both Cale and Cohen leading the Greyhounds, they have a chance to not only beat South Plaquemines, but go on a deep playoff run.