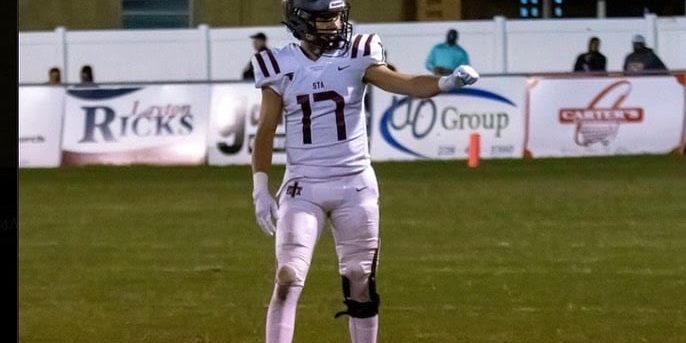 Chase Daigle is a senior out of St. Thomas Aquinas High School. Daigle is 6’0” tall and weighs 180 pounds. For the 2021 season, he completed 8 receptions for 147 yards and one touchdown. “My favorite memory from football was when we beat Riverside Academy this past year in overtime,” he says. He also says a few things he will miss about high school are the people and friends he has grown close with during high school, the bus trips to games, the laughs, and hitting people. Daigle says what keeps him motivated when it comes to football is the love he has for the sports he plays. “The passion and the work put into it keep me going,” he stated. Daigle says he likes to describe himself as “ambitious”. He also says his greatest strengths as an athlete are aggression and not being scared. When faced with adversity, Daigle says he always goes to his friends, parents, and God and asks them for advice on how to get over it. Daigle says his ultimate football dream is to walk-on as a long snapper.

Daigle has been playing football since the third grade. He says he joined because his older brother played. “I loved the idea of putting on the gear and going against another team,” Daigle says. Growing up, his favorite athlete was Tiger Woods. “He was underrated and doubted, and became one of the best of all time in golf,” Daigle explains. Outside of football, Daigle likes to golf, fish, and fix machines. He also enjoys hanging out with his friends after games, playing video games and spending time with family.

Daigle has some Division 3 schools interested in him including Defiance College, Albright College, Sterling College, and Lyon College. When it comes to choosing a college, he says he looks for a large body of students who support the athletes, things to do outside of school, and good professors. Daigle says aside from football he would like to attend Southeastern Louisiana University and then transfer to University of Louisiana at Lafayette and major in Mechanical Engineering.

Click the link below to check out Chase Daigle’s highlights: