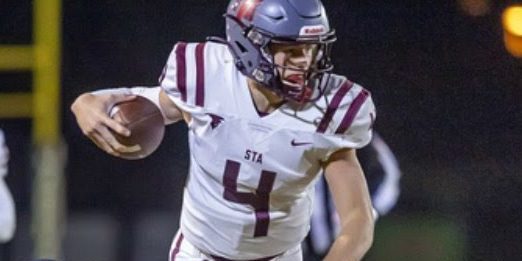 Drew Milton is a 5’9”, 175 pound quarterback and running back from St. Thomas Aquinas High School in Hammond, Louisiana. For the 2021 season, the Falcons finished with a record of 8-2, which was Milton’s senior season. “My favorite memory was my whole senior year. I had so much fun throughout the whole year that I couldn’t name just one moment to call my favorite, but the most fun I had playing was against Riverside after we won in overtime,” he says. Milton also says that he will miss playing under the Friday night lights, as well as the feeling he got on Mondays after a big time win the Friday before. Milton finished his senior season with 1,251 passing yards for 10 touchdowns and 585 rushing yards for 12 touchdowns. Growing up, Milton looked up to Drew Brees not only because they share the same first name, but also because everything Brees accomplished for New Orleans. Milton began playing football in the third grade. He says he would watch games on the television and as a kid he dreamed of being in the NFL. Once he finally got the chance to play football, something he wanted to do since he was very young, he took it.

Milton was just offered by Huntingdon College in Montgomery, Alabama, but he says he would love to be able to walk-on at Southeastern Louisiana University or Louisiana Tech University. When it comes to choosing a place to further his education and play football, Milton says he is looking for a place where he can make new relationships, somewhere that has a supportive student fan base, and ultimately somewhere that offers a good educational experience to set him up for his future. His plans aside from sports are to graduate with a degree in either professional aviation or construction engineering, find a career and start a family. Aside from sports, Milton maintains a 3.8 grade point average as well.

When it comes to him as a player, Milton says his greatest strength is his versatility. “Over the course of my four years, I have played all over the field on both sides of the ball and on special teams. I also believe that I am a student of the game and love to learn what can give me an advantage on the field,” he says. Although the Falcons had a winning season, Milton was still faced with some adversity, and he says he handled it by relying on his teammates if he needed them, and when they needed him, he would emphasize the skills the team worked on during practice. “Football isn’t always pretty and I know that so we tried to maintain poised throughout,” he stated. One word Milton uses to describe himself is “competitor”. He says that he will do anything to put himself in the best position to help his team come out successfully. He says, “I hate to lose almost as much as I love to win.”

Click below to check out Drew Milton’s senior season highlights: