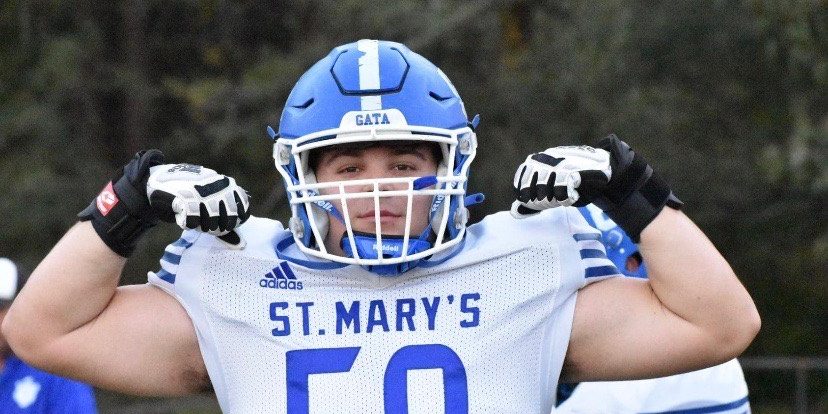 The most important piece for an offensive lineman is technique. While athleticism and power can lead a lineman to some success, good work with the hands and feet can truly push a lineman to the next level. This is exemplified in St. Mary’s Senior Gavin Lagrange.

While the 6’2”, 245 pound Lagrange isn’t lacking in size, he credits his hands and footwork as the tenets of his game. “I’m able to change directions and shift well,” Gavin said. “That’s something that is really helpful when I’m going up against a faster defensive end.” Lagrange also acknowledged that his game is modeled after All-Pro Indianapolis Colts guard Quenton Nelson, indicating Nelson’s mindset as the biggest trait he models from Quenton’s game. Gavin also looks to improve his speed on work more on getting to the second-level of defenders and finishing blocks.

Recruitment has beckoned Lagrange to our neighboring state of Texas as he visited East Texas Baptist University, but also spoke about other universities in which he may be interested. “I’ve looked at some division three schools in Texas, such as ETBU and Howard-Payne,” Gavin said. “Ultimately, I just don’t want to hang my cleats up yet. If push comes to shove, I’ll play anywhere that will take me.” This desire and passion to play football makes Gavin a dangerous player at the next-level.

Once he enters college, Lagrange would like to major in either education or history. While off the field, he enjoys hanging out with his friends and reading history articles.

As his power makes him a monster for opposing lines to deal with, technique is not the only trait on which LaGrange depends. Bench pressing a whopping 315 pounds, squatting an amazing 445 pounds, and power cleaning 250, Gavin’s combination of power and solid technique makes him a challenge for all opposing defensive linemen.

Gavin’s tenacity and technique as both an offensive and defensive lineman has led the Tigers to an 8-2 regular season record and a 7 seed in the Division IV playoffs. Lagrange looks to lead his Tigers team to a first-round playoff win against number 10 seeded Metairie Park Country Day this Friday.