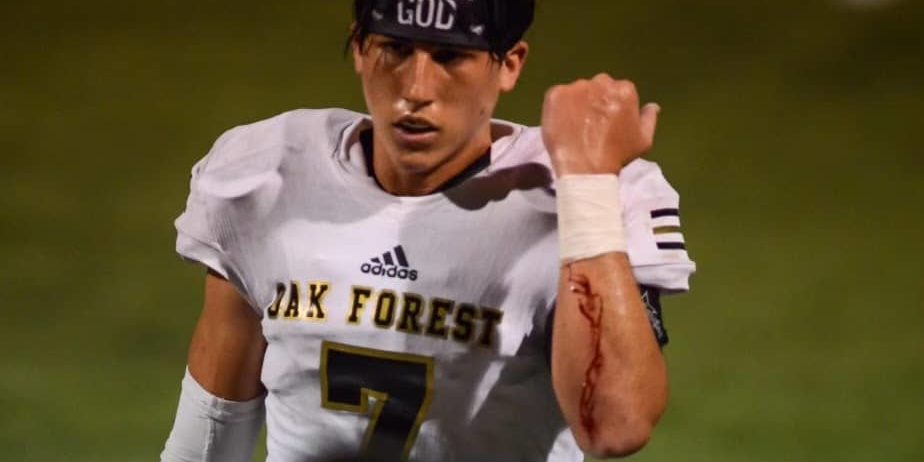 The Oak Forest Yellowjackets were able to finish their season strong with a 9-2 record this past year. On the team to help achieve this record was senior Jason Pingno Jr. Standing at 5’11” and 160 pounds, Pingno was able to end the 2021 season with 36 rushes for 350 yards and 5 touchdowns on the offensive side of the ball as a running back. On the defensive side of the ball as a strong safety, Pingno completed 55 tackles, 7 pass deflections and one interception. After his senior season was complete, Pingno traveled to Jackson, Mississippi to play in the MAIS All-Star Game, which he says is his favorite memory from football. Not only does Pingno work hard on the field, he works extra hard off the field to maintain a 3.8 grade point average. Aside from school and sports, Pingno enjoys hunting, working out, and playing video games with his friends.

Pingno says he is interested in multiple colleges, including several in-state schools that include LSU, ULL, Louisiana Tech, Southeastern, Louisiana-Monroe, and a couple Mississippi schools: Ole Miss and Mississippi State. His plans are to obtain a scholarship or preferred walk-on at a school. When asked what he is most excited for in college, Pingno says he is “looking forward to making more memories with new people like I did in high school.” After college football, Pingno would like to go to medical school to become a physical therapist. He also states that he will miss “playing alongside the people I’ve played with since I was young and the atmosphere the Friday night lights give off” about high school football the most.

Pingno originally began playing football after transferring to Oak Forest from a school that did not have a football program. Since transferring, he began playing football in the fourth grade and has fallen in love with the sport over the years. Growing up, Pingno admired Jamal Adams and Devin White’s ability to fly around the field and make plays. “My work ethic is unmatched, I’ll do anything to play college football and if a coach takes a chance on me he won’t be disappointed” Pingno stated when asked if there was any information about himself he would like to share, he claims that his greatest strengths include his work ethic and his ability to succeed at any position he is put in. Overall, Pingno is already a phenomenal student-athlete and will continue to be great wherever he ends up playing college football.