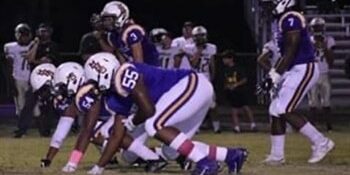 D’Corian Nelson is a 6’4, 280 pound defensive lineman from Marksville High School. D’Corian has outstanding strength, which is shown by his max bench press of 300 pounds, squat of 570 pounds, and power clean of 300 pounds. D’Corian says that the biggest challenge for him and his team this season was getting a lot of younger, inexperienced players ready for game day. He overcame this challenge by stepping up as a leader and ensuring the underclassmen were ready to go on Friday nights.

D’Corian will continue his playing career at Mississippi College where he plans to major in Biochemistry. He says the thing he is mostly looking forward to at the next level is the increased competition and heightened atmosphere of college game day as well as developing into a better overall athlete.

Click the link below to check out D’Corian Nelson’s highlighs: