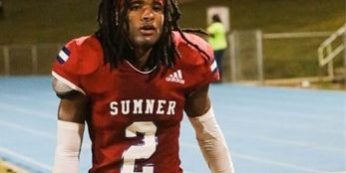 The Jewel Summer Cowboys had a great season going 5-3 and getting to the first round of the playoffs. They were led by senior running back and cornerback Brennan Self. When asked about the season, Brennan said, “Pretty successful, it may not have ended the way we wanted it to, but we carried on the winning the tradition from last season and kept it going for the others next season.”

Brennan has terrific speed and has a 4.45/40 yard time. The best part of his game on offense and defense is his ability to play everywhere on the field in the backfield or slot on offense and any position in the secondary on the defensive side. The part of his game that he wants to improve on is, “As a runner using more cuts to evade defenders.” The player on offense that he models his game after is New Orleans Saints running back Alvin Kamara, He said he is similar, “with how hard I hit the hole and catching the ball too.” On defense, he models his game after former Arizona Cardinals linebacker Pat Tillman. The reason why he said was, “with how not only do I want to make sure the receiver don’t catch ball, but I love to tackle and force the ball out by any means.”