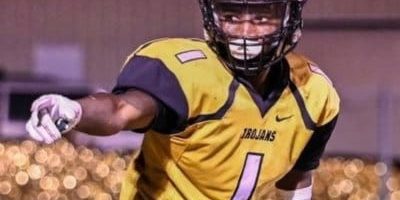 Sharone Finister Jr.  is a 6’2, 170 pounds wide out for Ferriday High School. Sharone stated that his biggest challenge this season was a rival game against Vidalia. He explained how he and his team overcame this challenge by listening to coaches, working as a team, and executing their game plan. When asked about hobbies outside of football, Finister stated “I’m an athlete, I take no time off. I’m always keeping my body in shape. I also play basketball and run track but in my alone time, I like to watch football or play video games.” As far as college, Sharone is still undecided on where he will go, but he will be making his official announcement on national signing day, February 2nd. Wherever he chooses to go, he has made his mind on majoring in sports administration.