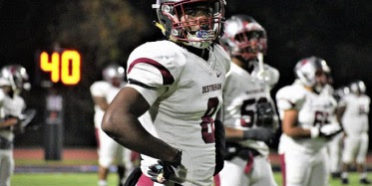 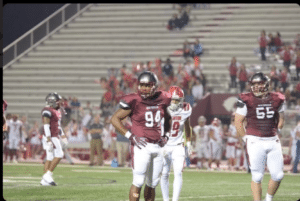 Steven Walker III, a middle linebacker and defensive lineman from Destrehan, had an outstanding senior season. Walker stands at 6’2” and 255 pounds. To finish off his high school football career, he recorded 58 total tackles, 38 solo tackles, with 17.5 tackles for loss, 7 sacks, 2 forced fumbles, 2 fumble recoveries and 7 quarterback hurries. “Destrehan football is one of the greatest programs in the state and one of the most overlooked and under-recruited,” Walker says. When it comes to what he will miss the most about high school, he mentions he will miss the brotherhood he built with his teammates. Walker also says his favorite memory from high school football is when Destrehan went to the state championship his sophomore year. When it comes to what inspires Walker to keep going, he says, “That I’m not the best, there’s always someone out there working hard to surpass you. I have a lot of disadvantages so I have to consistently improve even when others aren’t watching me.” One word that Walker uses to describe himself is “Relentless”, he says, “I keep going until I get what I want and go further even after that.”

Walker is interested in Nicholls State University or Southern University to further his education. He plans on majoring in engineering and playing college football. After he earns his degree, he says he would like to find a career and start investing, as well as start his own side business. Aside from football, Walker enjoys working out, watching anime, playing video games, spending time with those he loves, and occasionally, reading.

Jermaine Stewart is a 6’2”, 205 pound linebacker and defensive back for the Destrehan Wildcats. Stewart says he started playing football when he was eight years old. “My big cousin played and I wanted to be like them,’ he says. He says his favorite memory from football would have to be “stripping the ball out on the goal like in the fourth quarter in the third round of the playoffs”. A word Stewart uses to describe himself is “Blessed”, he says, “A lot of things have happened in my life and I have always been good.” Stewart says he handles adversity by putting his head down and pushing through it. He also adds that his greatest strength as an athlete includes that he knows when and when not to rely on his athletic abilities. “Competing and showing who’s the better athlete” is what he says keeps him inspired.

Stewart says he is interested in playing at College of the Desert in Palm Desert, California. He says he is most looking forward to meeting new people and being able to grow as a person. His ultimate football dream is to win a ring while playing college football. After sports, he would like to open his own barbershop. In his free time, Stewart likes cutting hair, drawing and taking pictures.

Click the link below to check out Steven Walker III’s highlights:

Click the link below to check out Jermaine Stewart’s highlights: