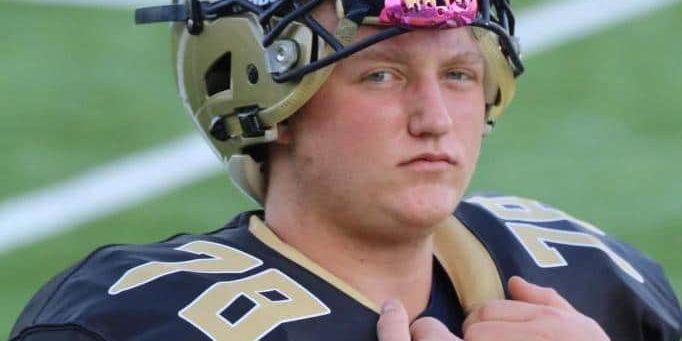 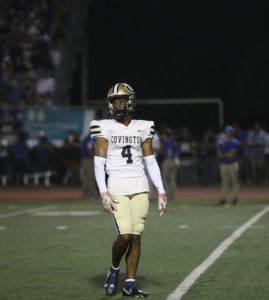 For the 2021 season, the Covington Lions finished with an overall record of 6-5. Helping the Lions this past season was offensive lineman Logan Potter and defensive back Ian Goodly. Potter stands at 6’5”, 315 pounds. Louisiana Football Magazine owner and scouting expert Lee Brecheen describes Potter as a “good and tough kid”. Potter only began playing football at the beginning of his freshman year of high school when his coaches begged him to play. What keeps Potter motivated is the people that tell him he won’t make it anywhere in life with sports. He says his greatest strengths as an athlete are that he is “quick and big, good attitude or bad attitude when needed to get  down the field,” he says. One word he uses to describe himself is “determined”. He says, “If I ever go back a couple steps, I’m determined to be better than I was when I got pushed back. I work to earn everything, I’m determined.” His favorite memory from football is when Covington played Warren Eastern. He says, “We went into three overtimes. It was a scratch and claw game and even though we eventually lost, it was a great game and a good memory.” Outside of sports, Potter likes to be around his friends and family.

When it comes to a college, Potter says he’s looking for “the experience and talent that will be gained from the coaches.” Potter was interested in Southeastern and LSU, but ended up signing with Southeastern. After football, he plans on using his degree to get a job. His ultimate football dream is to play in the NFL or score a touchdown.

Ian Goodly, a 5’11”, 170 pound defensive back for the Lions, finished his senior season with 11 pass break-ups, 3 interceptions and 84 tackles. Lee Brecheen says Goodly is “one of the best form tacklers in Louisiana.” Goodly says his biggest inspirations to keep playing are his mom, grandmother, brother and grandfather. He says his greatest strengths include that he is a smart player who knows multiple positions and that he’s fearless. He describes himself as a “warrior”. “I’ve never been the biggest, but I’ve always had fight in me, I don’t like to surrender, and don’t shy away from challenges,” he says. Goodly faces adversity by praying and using mental strength. Goodly says he will miss the coaches and teammates the most from high school. He also states that surprisingly, he likes away games more than home games. His favorite football memory is attending a football camp his sophomore year. Goodly started playing football when he was 8 years old. On the way home from a basketball game, he saw a football game and decided to ask his mother to play the next year.

Outside of sports, Goodly enjoys art and taking pictures. After football, Goodly plans to start a family and wants to be a trainer. His ultimate football dream is to play in the NFL. Goodly is signed to play at Southeastern in the fall.

Click the link below to check out Logan Potter’s highlights:

Click the link below to check out Ian Goodly’s highlights: