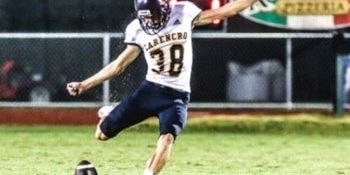 Carencro is looking to win back to back 4A state championships. Their kicker Gavin Royer will be a big part in them trying to get another state championship. As far as the how the seasons has gone so far, they have had injuries and have battled back.

Gavin is a 6’1 170 pound kicker for Carencro. The best part of his game is his ability to kick the ball out of the end zone on kickoffs. “I’m most likely going to put it in the end zone and won’t give their returners a chance to return it”. The thing that he wants to improve on the most is his, “being more consistent on field goals”. The player that he models his game after is Harrison Butker of the Kansas City Chiefs. For college he is currently looking at schools like McNeese and ULL. The thing that is most important for what he is looking for in a college is, “to major in Business and to have a successful college career in kicking”.