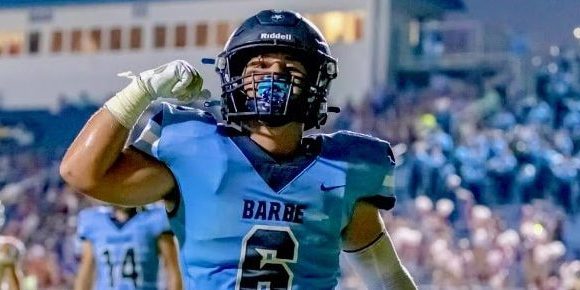 Tylan Ceasar is a running back and wide receiver out of Barbe High School. In 2020, which was his junior year, Ceasar transferred to Kinder High School because Barbe decided not to have a football program due to Hurricane Laura. While playing for Kinder, Ceasar was able to help bring the team to a state championship and won the award for Most Valuable Player in the championship game. Ceasar says that winning the championship and receiving the award is his most memorable experience in football. In 2021, Ceasar transferred back to Barbe High School and was able to finish his senior season with 890 rushing yards, 10 touchdowns and 18 receptions for 245 receiving yards. Ceasar stands at 5’7” and 175 pounds, with a 4.53 40-yard dash. Owner of Louisiana Football Magazine and scouting expert Lee Brecheen states that Ceasar is able to “hit the hole quick and tough.” Caesar says that he believes he is dominant as a player. “No matter who you match me up with as a person or as a player, I will always want to dominate my competition,” he says. “My greatest strengths as an athlete would be my ability to become a leader in moments that are needed most and that I play with everything I have,” Caesar says.

Growing up, sports were always played in his family, so he picked up a football at a young age and started to love the sport. When he reached high school, he was able to play all four years at the varsity level. Caesar’s favorite athlete growing up was Bo Jackson because of the impact he made in both football and baseball and being able to play at the highest level.

When it comes to college, Caesar looks at how well the students perform academically and somewhere where he will have things to do on campus during his free time. Aside from football, his plans are to further his education and obtain his master’s in Psychology. Right now, he says he is interested in University of Louisiana at Lafayette, University of Louisiana Monroe, McNeese State, and Lamar University. Caesar says that he will miss his teammates, from both Barbe and Kinder. “My teammates have always had my back,” he says. No matter where he chooses to continue his academic and athletic career, he will most definitely dominate on and off the field.

Click below to check out Tylan Ceasar’s senior highlights: