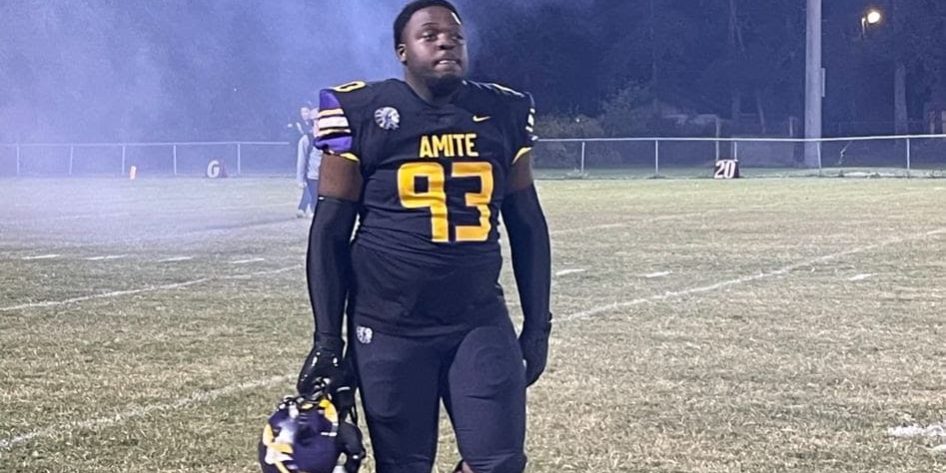 Amite High School senior Zamian Waller likes to describe himself as a “machine”. Waller says, “I do not stop, no matter what. I work whistle to whistle and sideline to sideline. Unstoppable motor.” Waller is a 6’2”, 315 pound defensive tackle for the Warriors. He completed his senior season with 94 tackles, 35 solo tackles, 6 sacks, 23 quarterback pressures, 8 quarterback hits, one deflection, one fumble recovery and one touchdown. Not only is Waller a machine on the field, he is a machine in the weight room maxing out at 425 pounds for bench, a whopping 675 pounds for squat, and 315 for power clean. He says that his greatest strengths on the field are his hands and feet as well as being smarter and more dominant than the person in front of him.

Waller became interested in football when he was younger and started playing in the fourth grade. “I used to watch it all the time and I dreamed of being in that place, so that made me play.” Waller says his biggest inspiration are his parents. “They grinded on their own to get to the top and worked hard to get where they are now so it makes me want to work hard to get where I want to get.” He also says no matter how hard the job is, he will work and refuses to let anything bring him down. Waller looks up to defensive tackle Aaron Donald because “It is not normal for a person to be in the league and dominate like he does at his height.” Waller’s favorite memory from playing football is when Amite High School played Delhi Charter School and he “picked up a player 8 feet in the air and slammed him.”

When it comes to his future plans, the uncommitted defensive tackle is interested in Jackson State University and is being recruited by Louisiana College and Nicholls State University. Waller says that he is not only wanting to play football, but get an education also. After football, he plans to open an HVAC business. Aside from football, Waller likes to hang out with friends and family.

He says that he is going to miss the coaching staff at his high school the most as well as his brothers. “It is more than about football to us. We’re a family.” When asked how he handles adversity, he says he likes to get to a place by himself and cool down. “A cool head wins a hot game,” Waller stated. Waller was one of many talented players on Amite’s roster, leading them to a 17-6 win over the Many Tigers for the title of 2021 2A State Champions.

Click the link below to check out Zamian Waller’s senior highlights: